An earlier red wind warning for Galway and Clare has been stood down.

Met Éireann said one of its stations actually exceeded the red level threshold for a time.

Within the past two hour Met Éireann's Mace Head station in Galway has exceeded the Status RED warning levels. Dangerous conditions expected to continue for the next few hours. pic.twitter.com/zOHmXJHea2

One Twitter user posted a video of a truck being overturned during the storm at Maam Cross in Connemara.

Met Éireann says severe winds will continue - with southwest winds reaching mean speeds of 65 to 80km/h, with gusts of 110km/h to 130km/h at times.

Winds will gradually ease from the south through the evening, as the storm centre drifts away northeastwards.

While there continues to be an elevated risk of coastal flooding.

A status yellow rainfall warning has also been issued for Connacht and Donegal.

Further heavy showers of rain or snow are forecast, with a continuing risk of flooding due to already saturated ground and elevated river levels.

These alerts are in effect until midnight.

There will be westerly winds of mean speeds 50 to 65km/h on Saturday evening, and early Saturday night, with gusts of 90 to 110km/h expected.

This warning will be in place from 7:00pm Saturday until midnight.

And a status yellow snow/ice warning remains in place for the entire country.

Wintry showers of hail, sleet and snow will spread eastwards and lead to icy conditions.

There will be a more persistent band of rain and sleet across the country, turning to snow for a time, particularly over the Midlands and north - and over high ground elsewhere.

The combination of sleet/snow and strong winds will lead to low visibility and hazardous driving conditions.

Public transport services are expected to return to normal, after services were curtailed during the red weather warning.

Delays are also expected as some services to and from the west saw reduced speed earlier.

Due to Storm Jorge, there will be reduced speed on some services to and from the West of Ireland this afternoon. Expect some delays as a result - MH

Shannon Airport has advised passengers to contact their airline for the most up to date information.

One Ryanair flight from Manchester in the UK to Shannon was diverted to Belfast.

And several ferry sailings have been cancelled, including the Rosslare - Pembroke route.

Are you travelling in the coming days? There may be some disruption to our services due to Storm Jorge.

Keep an eye the latest updates regarding your trip here - https://t.co/a8lSIIaDNd

Our phone team is available till 4pm today. Contact us here - https://t.co/toL3sIeEmM pic.twitter.com/XemqcZtRZV

The National Emergency Coordination Group met on Saturday to assess the storm.

It said flooding is affecting many areas with river catchments due to the prolonged period of heavy rainfall.

ESB Networks has also taken action and are ready to mobilise to restore power once the impact of the storm is known.

The Department of Social Protection is on standby with to assist with damage and recovery due to the impacts of flooding.

While Defence Forces troops are on standby and available to assist if required, as our Civil Defence personnel.

People are being asked to check on isolated and vulnerable neighbours as conditions allow.

They are again reminded to monitor Met Éireann forecasts for their area and be aware of the weather conditions. 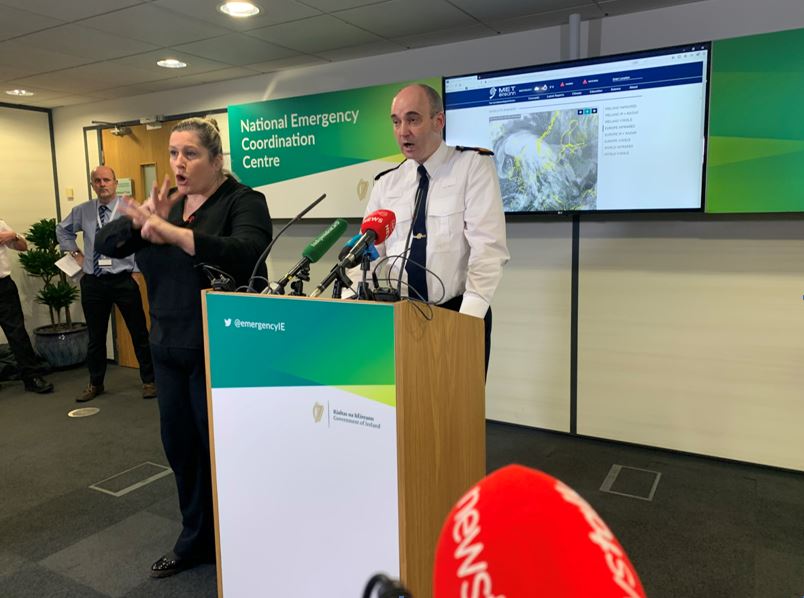 A briefing of the National Emergency Coordination Group at the Department of Agriculture in Dublin | Image: Amy Croffey

Road users should also be aware of hazardous travelling conditions.

Motorists should slow down and be aware of the dangers of fallen trees, debris and high flood waters.

The National Emergency Coordination Group is monitoring the situation and will meet again on Sunday.