The US has released a video which it claims shows Iranian forces removing an unexploded mine from...

The US has released a video which it claims shows Iranian forces removing an unexploded mine from an oil tanker that caught fire in the Gulf of Oman yesterday.

Washington has accused Iran of attacking two tankers in the area yesterday morning.

US Secretary of State Mike Pompeo said Tehran launched the attack in a bid to escalate tensions in the region - and said the US ambassador to the UN would raise the issue before the Security Council on Thursday night.

Iran has said it "categorically rejects" the allegation – and noted that the “massive” US military presence in the region is the main source of insecurity and instability in the Persian Gulf.

This morning, US Central Command released a video which it said shows Iran’s Islamic Revolutionary Guard Corps (IRGC) attempting to hide the country’s involvement in attacks on the oil tankers.

In a statement, it said the footage shows the Iranian troops pulling an unexploded limpet mine from the Japanese-affiliated tanker, the M/T Kokuka Courageous – more than eight hours after the first explosion.

Limpet mines use magnets to attach to ship hulls, disabling them without sinking them.

The Norwegian-owned ‘Front Altair’ tanker was also damaged in the incident near the Strait of Hormuz yesterday, around 40km from the Iranian coast.

It was carrying 75,000 tonnes of the hydrocarbon mixture naphtha and caught fire shortly afterwards. 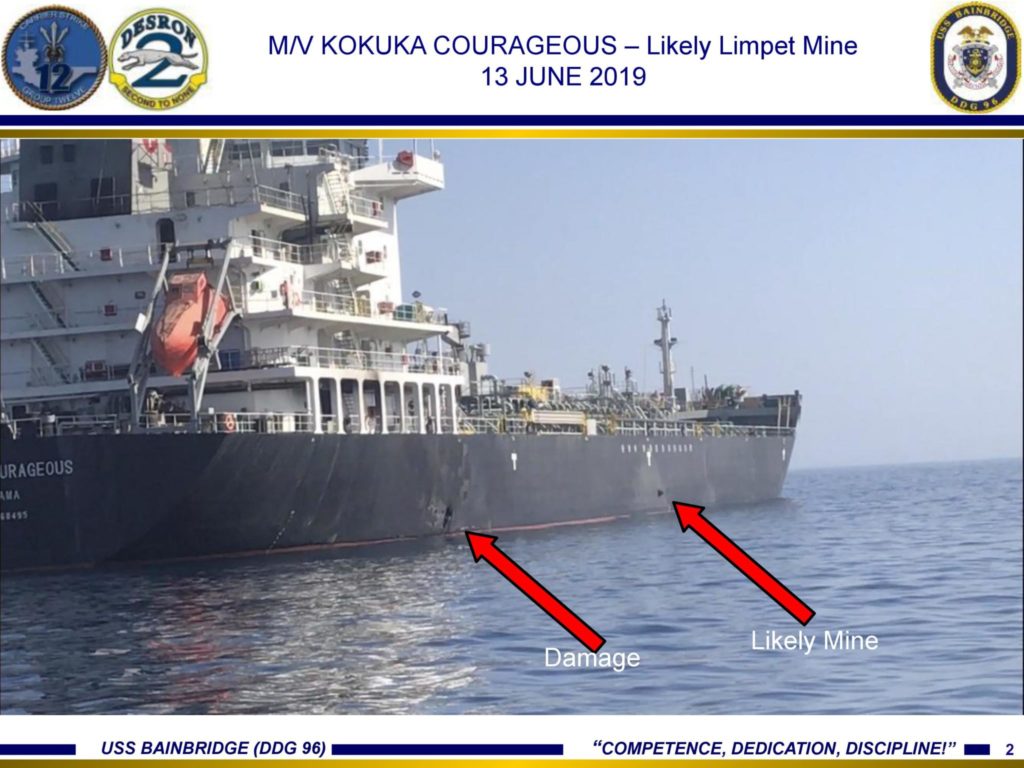 An image the US Military claims provides evidence of the use of a limpet mine in an apparent attack on an oil tanker in the Gulf of Oman. Image: US Central Command

Mr Abe had travelled to Iran to see if there is any basis for resuming talks between the US and Iran. Tensions have been high since the US pulled out of the Iran nuclear deal and re-introduced crippling sanctions on the country.

Iran has denied involvement and said in a statement to the UN: “The US economic war and terrorism against the Iranian people as well as its massive military presence in the region have been and continue to be the main sources of insecurity and instability in the wider Persian Gulf region and the most significant threat to its peace and security.” 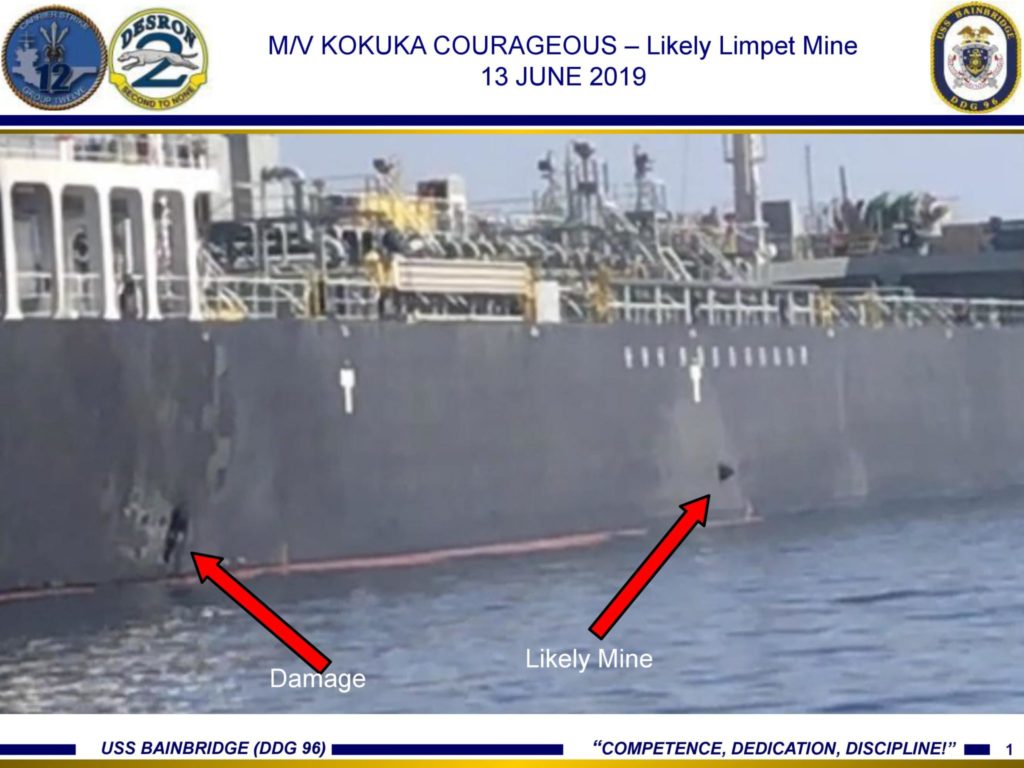 An image the US Military claims provides evidence of the use of a limpet mine in an apparent attack on an oil tanker in the Gulf of Oman. Image: US Central Command

Captain Bill Urban, lead spokesman for US Central Command said the US and its partners would “take all necessary measures to defend ourselves and our interests” in the region.

“Today's attacks are a clear threat to international freedom of navigation and freedom of commerce,” he said.

“The US and the international community stands ready to defend our interests, including the freedom of navigation.”

“The United States has no interest in engaging in a new conflict in the Middle East; however, we will defend our interests.”

The explosion on the two tankers pushed oil prices up by 4% yesterday.

The UN secretary general, António Guterres, has warned that the world cannot afford “a major confrontation in the Gulf region.”