The race to become the next US president is turning out to be a closer one than many people thoug...

The race to become the next US president is turning out to be a closer one than many people thought.

US President Donald Trump has tweeted that he has had 'a big win', while Democratic challenger Joe Biden said 'we're gonna win this'.

Mr Biden also told supporters in a live television address to remain patient for an election result, he added: "We believe we're on track to win this election."

Moments later a bullish Donald Trump insisted his campaign was ahead, tweeting: "We are up BIG, but they are trying to STEAL the Election.

"We will never let them do it. Votes cannot be cast after the Poles (sic) are closed!"

The spelling mistake was later corrected and Mr Trump reposted the tweet, which was then flagged by Twitter as being 'disputed' and potentially misleading. 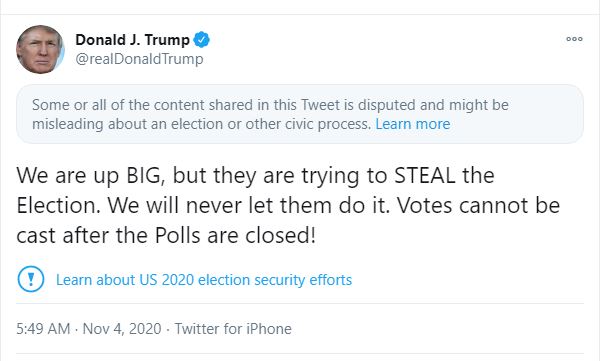 Mr Trump also said he would make a statement later.

Mr Biden's campaign has told NBC the race for the White House remains a "slog" as the margin between him and Donald Trump remains very close.

The Democratic candidate insists he remains "confident" of winning the crucial battleground states of Michigan, Wisconsin and Minnesota and his team has been encouraged by early results in Arizona.

But they have conceded that the party's hopes for a convincing victory that could be celebrated on election night are unlikely to be realised with counts in crucial states not likely to arrive until later in the week.

Mr Biden and his Republican rival are locked in a razor-tight battle as they wait to secure a breakthrough in the race for the White House.

Swing states crucial to either of them winning the US presidency including Arizona, North Carolina and Georgia are still all to play for. 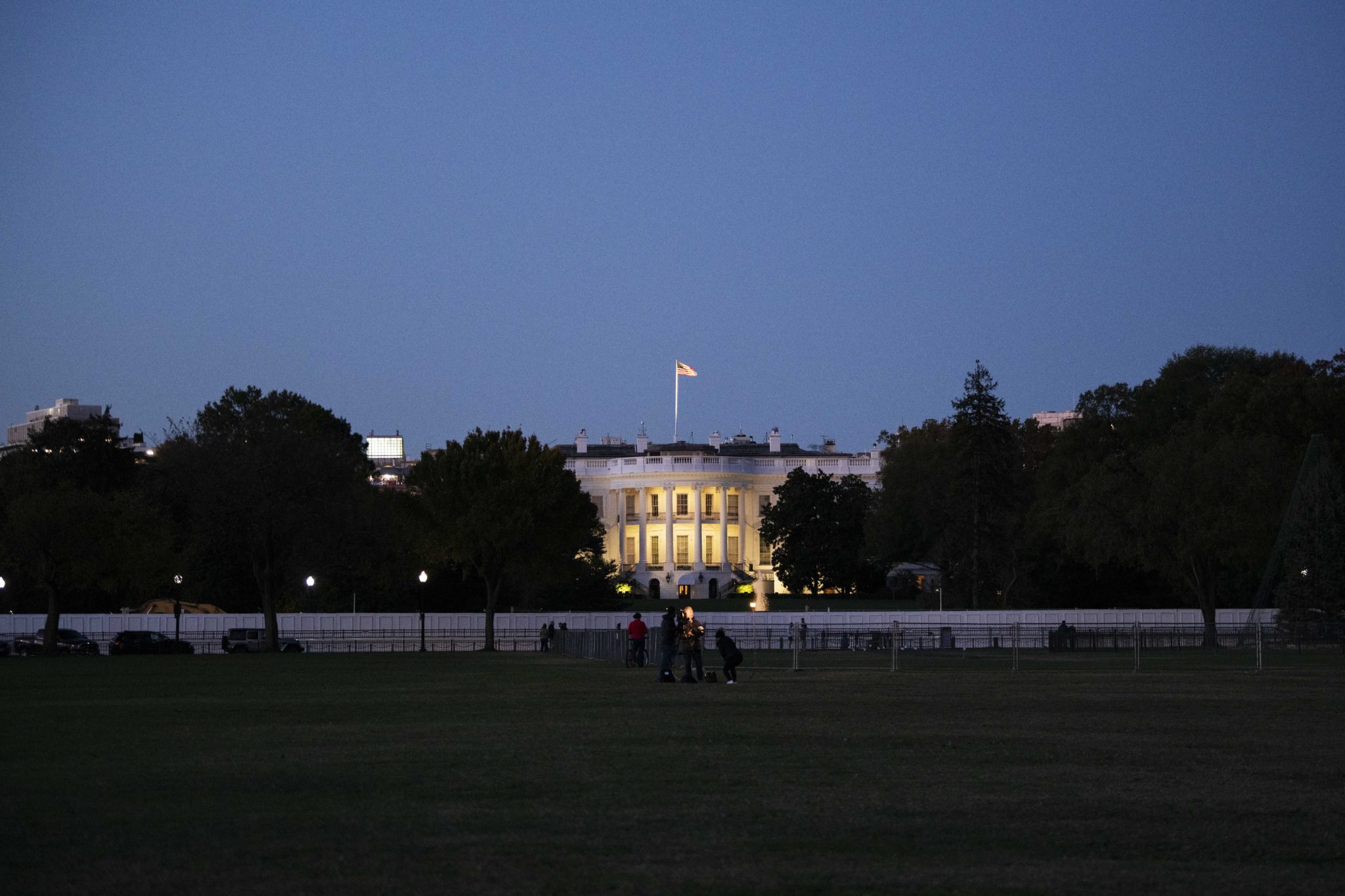 Also hanging in the balance are Michigan and Pennsylvania, but state officials have warned a final declaration could be days away due to the large amounts of postal votes.

But while the results have not yet been announced, one projection shows Mr Trump is on course to hold on to Ohio.

And 'ruby red' Texas looks set to stay that way, the Republican incumbent is 6% ahead with 88% of all votes counted.

That means that so far, Mr Biden has failed to flip any so-called 'toss-up' states.

Mr Trump is waiting in the White House to discover if he will get four more years there or become the first one-term president since 1992.

He admitted earlier losing would not be "easy", but is still publicly optimistic about his chances.

He has made some progress being projected to win in Florida and he is also ahead in another key state, Pennsylvania.

Meanwhile protesters have clashed with police in Washington DC as cities across the US prepared for potential unrest in the wake of the election result.

Trouble flared on Black Lives Matter Plaza as police detained two men after hundreds of demonstrators had gathered close to the White House.

At least three people have been arrested during scuffles with officers, NBC News reported.

Fireworks could be heard being launched as the protesters walked through the city.

Much of the area had been boarded up ahead of potential election night unrest.

After the two men were detained, officers on bikes formed a barrier as protesters tried to force themselves through.

Chants of "f*** the police" and "no justice, no peace" broke out while demonstrators called on police to release the men.

Some protesters kicked police bicycles while others called for the crowd to not allow them to take away the two detainees.

Officers escorted the detained men out through the barrier of bikes. It was not clear why they were being held. 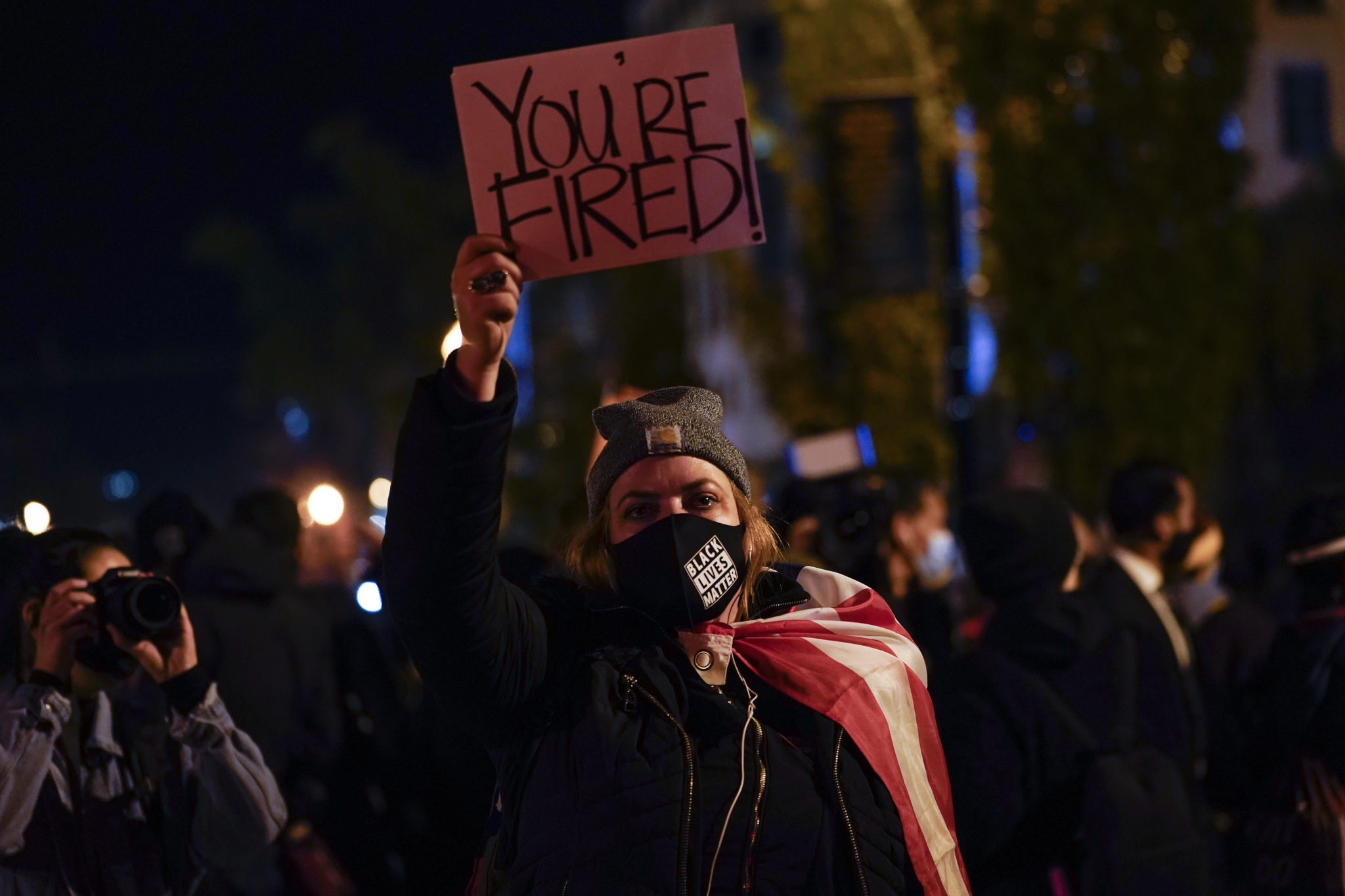 A demonstrator holds up a sign while watching election returns outside the White House in Washington DC. Picture by: Jacquelyn Martin/AP/Press Association Images

Earlier, protest group Shut Down DC said it had prepared for clashes with authorities should violence flare.

"Trump represents the worst in whiteness - and that's racism," one protester in Washington DC said.

"It's important I show my son that we must vote against it and we show Trump that we're all against it."

Ahead of the election, a "non-scalable" fence was erected to secure the White House complex, with 250 National Guardsmen on standby, NBC News reported.

"It is something we've prepared for," she said.

"We recognise that though it is a risk, it's a risk we're willing to take because of how important this moment is going to be for us."

The Los Angeles Police Department (LAPD) said it had a declared a "citywide tactical alert" to ensure sufficient resources were available "to address any incidents that may arise as a result of election day activities".

"The department is committed to ensuring that adequate resources are available to ensure all Angelenos are able to safely vote without interference," the LAPD added.

Meanwhile, the New York Police Department (NYPD) has prepared for a possible increase in protests in the days and weeks after the presidential election, NBC News reported.

The NYPD has anticipated that protests could last into the beginning of next year, according to a memo from a senior police official.

The memo from New York City Police Commissioner Dermot Shea said there "is a strong likelihood that the winner of the presidential election may not be decided for several weeks", according to NBC News.

Mr Trump had warned of "violence in the streets" as voters headed to the polls after criticising a Supreme Court decision to allow mail-in ballots in Pennsylvania to be counted up to three days after the election.