The Government has urged Irish citizens stay away from several regions in Turkey, after the count...

The Government has urged Irish citizens stay away from several regions in Turkey, after the country stepped up a ground and air offensive against Kurdish militia in northern Syria.

The military strike has forced thousands of people to flee.

Turkish President Recep Tayyip Erdogan said that so far, more than 100 "terrorists" had been killed in the fighting, although casualty reports from the area did not support his claim.

Meanwhile two people, including a child, have been reportedly killed in the Turkish border town of Akcakale by incoming mortar fire from Kurdish-held positions.

International aid agencies are warning of an escalating humanitarian crisis in the region.

Ankara launched its military operation after US President Donald Trump pulled out American troops from alongside their Kurdish allies.

The move drew swift international criticism, with Tánaiste and Foreign Affairs Minister Simon Coveney saying he was "deeply troubled" by the move.

"The fight against ISIS made decisive progress earlier this year.

"Any unilateral military action against those groups which played a decisive frontline role in the fight against ISIS risks undermining this progress.

"Such action could also lead to further protracted instability and have serious humanitarian consequences. We urge Turkey to refrain from this action."

.@FedericaMog at the @Europarl_EN “The Turkish operation into north-east Syria can open a new, dramatic chapter in the already very dark history of the Syrian war (…) We call upon Turkey to immediately stop its unilateral military actions.” pic.twitter.com/tDh4mjvs9w

The EU has also called on Turkey to "immediately stop its unilateral military action".

The Department of Foreign Affairs has updated its travel advice for Turkey.

It says Irish citizens should exercise a high degree of caution.

The department adds: "We strongly advise against all travel within 10 kilometres of the border between Turkey and Syria and to Diyarbakir city.

"We advise against all but essential travel to the remaining areas of the provinces of Diyarbakir, Gaziantep, Hatay, Kilis, Mardin, Sanliurfa and Sirnak.

"In addition, we recommend against all but essential travel to all areas of Siirt, Tunceli and Hakkari provinces."

On the military strike itself, the department says: "The offensive has increased political tensions within Turkey and the Turkish government has warned against what it terms 'terrorist propaganda', which can be interpreted broadly."

Seventy-eight people have been reportedly detained for making critical comments against the operation on social media.

Kurdish forces have halted all operations against Islamic State in order to focus on battling Turkish troops, according to Kurdish and US officials.

Syrian Kurdish fighters had along with US forces been tackling the remnants of IS, after the terror group was defeated earlier this year.

Urging moderation by Turkey during its assault, Mr Trump warned Ankara that it would be hit hard financially if it did not "play by the rules."

Writing on Twitter, the US president said: "I am trying to end the ENDLESS WARS. Talking to both sides.

"I say hit Turkey very hard financially & with sanctions if they don't play by the rules! I am watching closely." 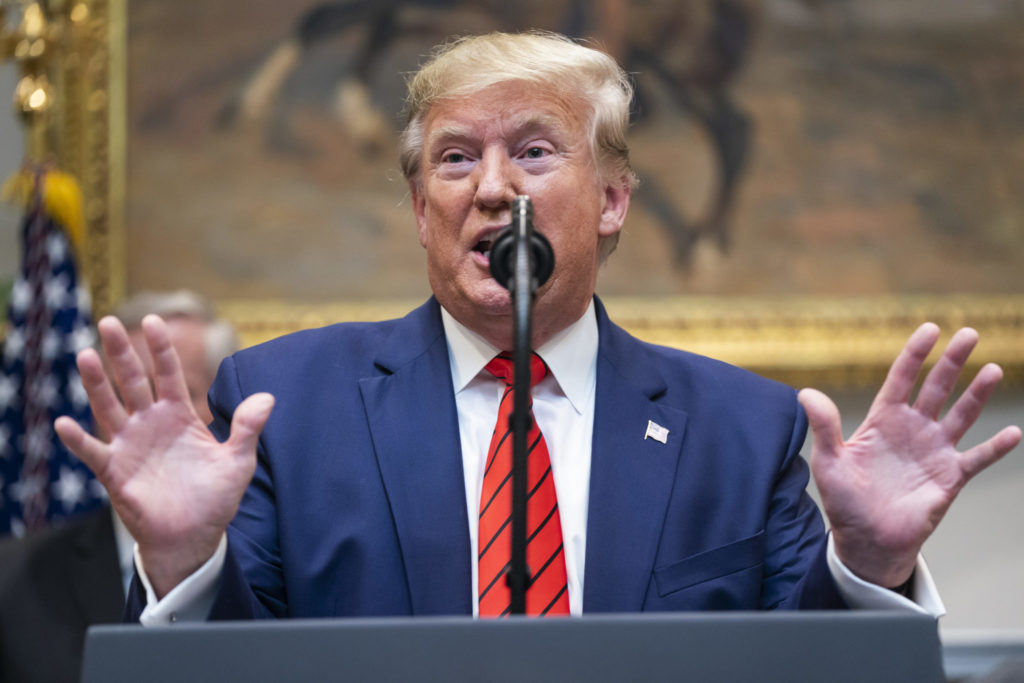 US President Donald Trump speaks to the media at the White House, 09-10-2019. Image: Jim LoScalzo/DPA/PA Images

The Turkish military said its jets and artillery had so far struck 181 targets.

Britain, France, Germany, Belgium and Poland have called a meeting of the UN Security Council and are preparing a joint statement condemning the assault.

The council will meet behind closed doors on Thursday.

Hamish De Bretton-Gordon, the former head of the British Army Chemical Weapons Unit, said European powers must not look the other way.

“The Syrian Kurds who have helped us – the coalition including the Americans – defeat Islamic State are now potentially being attacked by a NATO member,” he said. 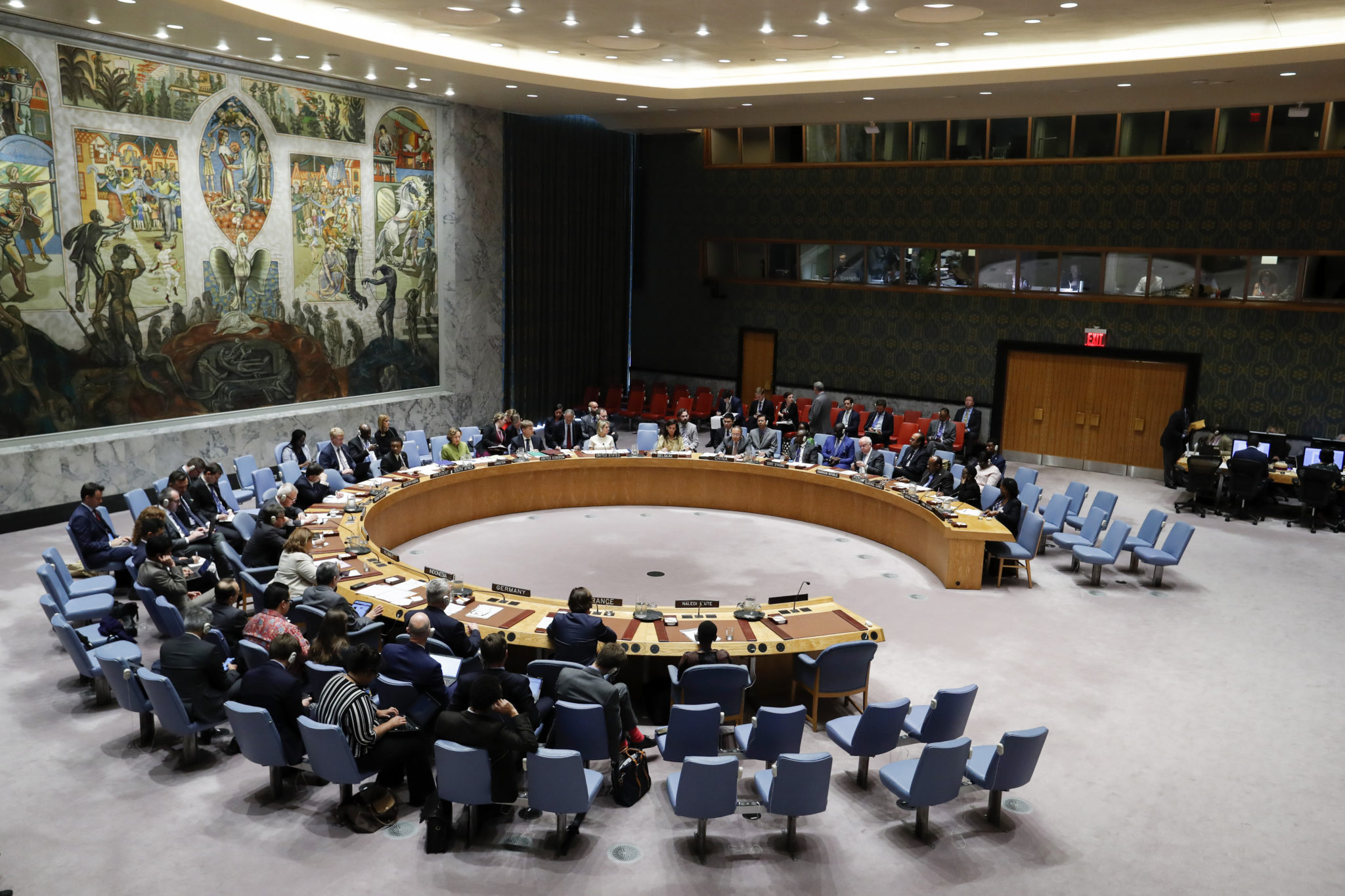 He said NATO members in Europe “should be really looking deeply on how they can help prevent a catastrophe.”

The invasion comes after President Trump began withdrawing troops from the region on Sunday.

Overnight, the US Secretary of State Mike Pompeo defended President Trump’s decision and insisted he had not given Turkey the “green light” to invade.

Speaking to PBS Newshour, he said that during US conversations with President Erdogan "it became very clear that there were American soldiers that were going to be at risk.”

“The president made a decision to put them in a place where they were out of harm's way,” he said. “That's what we've done.” 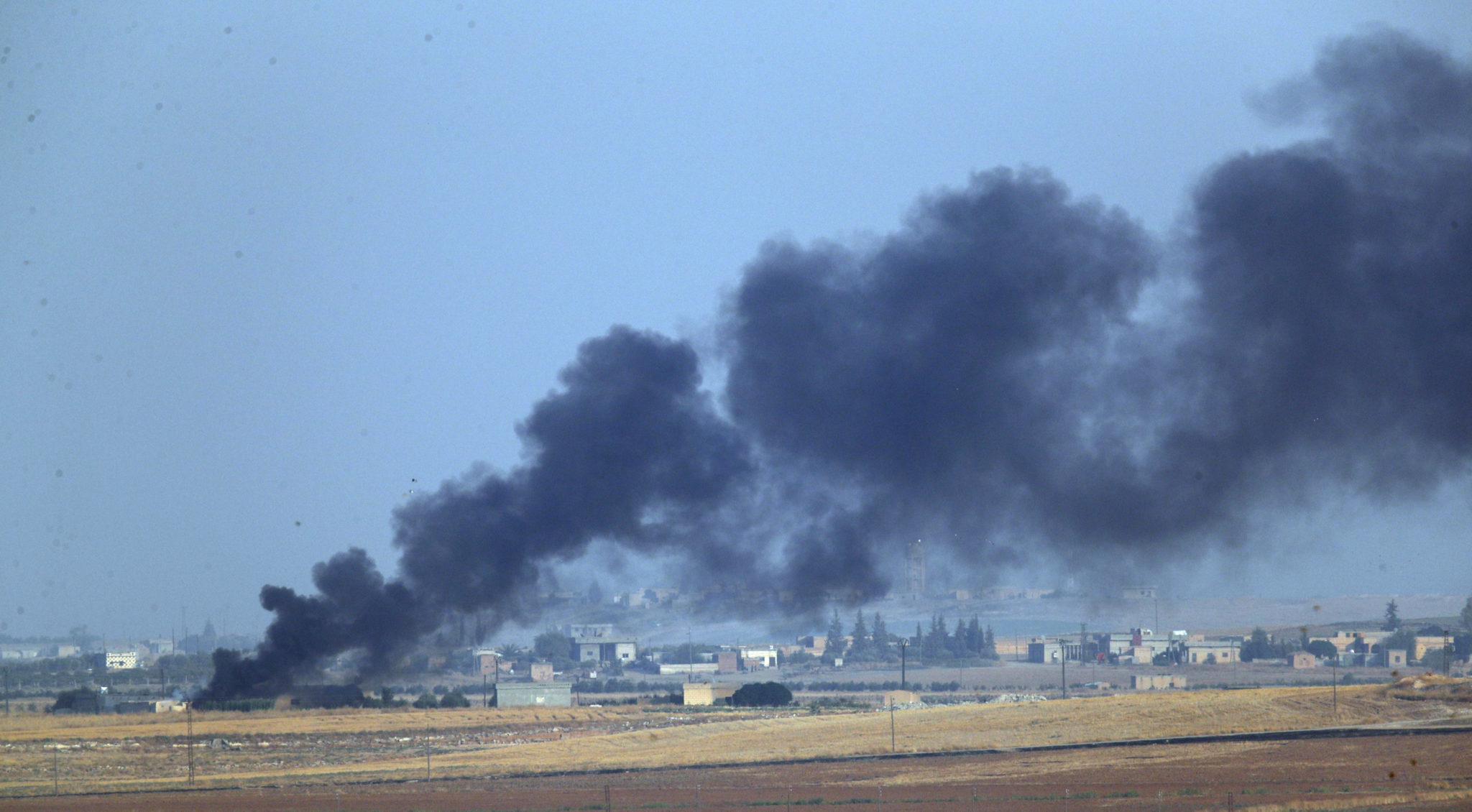 Smoke billows from a fire on the Syrian side of the border with Turkey during bombardment by Turkish forces, 09-10-2019. Image: Lefteris Pitarakis/AP/Press Association Images

He rejected warnings from the Republican Senator Lindsay Graham that the attack could lead to a re-emergence of Islamic State and said he believes Turkey has a “legitimate security concern.”

Senator Graham and Democratic Senator Chris Van Hollen have launched a bipartisan bill that would punish Turkey for the invasion – saying they expect wide support from both parties.

I am pleased to have reached a bipartisan agreement with Senator @ChrisVanHollen on severe sanctions against Turkey for their invasion of Syria.

While the Administration refuses to act against Turkey, I expect strong bipartisan support. pic.twitter.com/Ph5fIVt7k3

On Twitter the Republican Senator, normally a staunch Trump ally, said: "While the administration refuses to act against Turkey, I expect strong bipartisan support.

"Most members of Congress believe it would be wrong to abandon the Kurds who have been strong allies against ISIS."

The Turkish airstrikes hit the the towns of Ras al-Ayn and Tal Abyad, according to reports in Turkey.