Pro-choice campaigners in the US have sharply criticised Texas lawmakers for introducing some of the country’s most restrictive laws.

However, the Texas law - dubbed the 'heartbeat bill' - is specifically designed to evade the typical legislative scrutiny and challenges.

Instead, it introduces a sort of "bounty" system - giving ordinary citizens in Texas the ability to sue anyone involved in providing abortions from the sixth week of pregnancy.

The New York Times reports that those who successfully sue such providers can then receive cash payments of $10,000 plus legal fees.

However, those same people won’t have to pay the defendants' legal fees if they lose the case.

It in essence leaves enforcement of the law to citizens rather than the state.

The US Supreme Court controversially opted against stopping the law from going into effect by a narrow 5-4 majority, although the court may revisit it again if cases under the law are taken.

However, the Biden administration is now suing Texas in a bid to stop the state from enforcing the bill - one of many expected legal challenges.

The legislation has, meanwhile, mobilised both pro-choice and pro-life camps into action - especially amid expectations other conservative states will now seek to copy Texas. 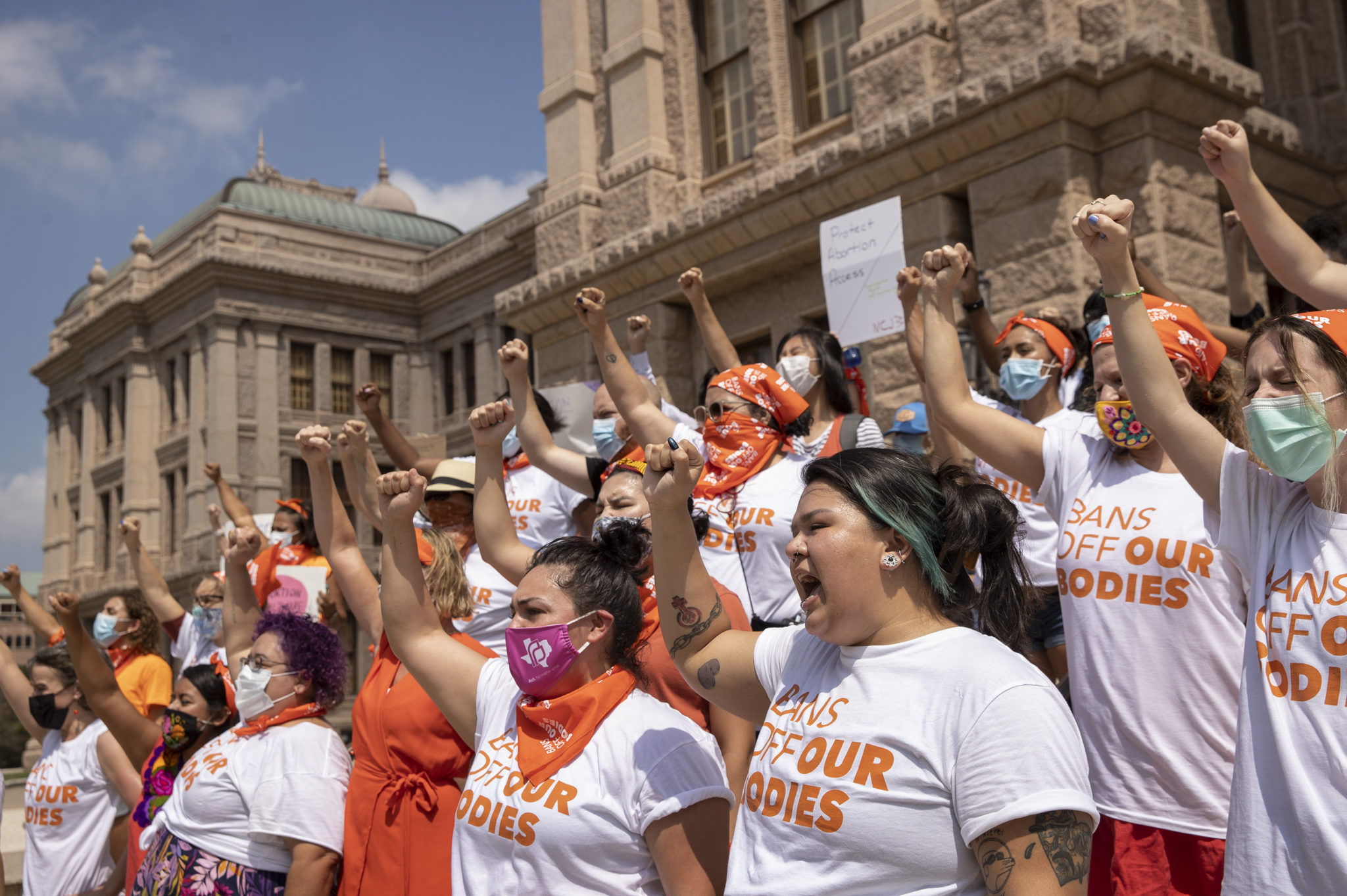 Women protest against the six-week abortion ban at the Capitol in Austin, Texas. Picture by: Jay Janner/AP/Press Association Images

Pro-choice campaigners are particularly concerned that such laws will ultimately put women's rights nationwide under threat if the Supreme Court - which now has a majority of Republican-appointed judges - decides to revisit Roe v Wade.

In terms of the Texas law specifically, campaigners say many women don't even know they are pregnant after six weeks.

The ACLU says the legislation is "uniquely egregious", and that the path local lawmakers have gone down is "sinister and blatantly unconstitutional".

It all comes after several years of other states such as Alabama looking to restrict abortions.

Dr Joe Pojman, the executive director of the Texas Alliance for Life, told The Pat Kenny Show the state "has decided the life of the unborn child - a life of a child with a beating heart - should be protected by law".

One concern around the law that women can travel to neighbouring states such as New Mexico to get an abortion - a situation that means poorer women who can't afford to travel could experience the most severe impact of the new regime.

However, Dr Pojman argued that's the same with any state-specific law.

He said: "The State of Texas has 29 million people, and their elected representatives have passed this law.

“We provide vast alternatives - not just after the baby’s born, but will help with free services for three years after the birth of the child. We have gone to great lengths to protect the unborn child and provide alternatives to abortion for that mother.”

“Any attempts by any of the 50 states to protect unborn babies from abortion before viability have been blocked by the federal or state courts.

“I think the legislature in Texas was frustrated - they wanted to try a new approach. It relies not on public enforcement, but private. Whether that’s going to work… I don’t know. There is quite a bit of legislation going on.”

Nonetheless, he said his organisation believes unborn children should be protected from conception - including in cases of rape, incest or fatal foetal abnormality.

He said: “In the case of rape, we all have to acknowledge rape is a terrible crime against the mother. But if the woman does become pregnant as a result of that terrible crime… we have to remember there are now two individuals involved - the unborn child and the mother.

"Why would a compassionate society advocate and encourage the woman to take the life of the unborn child for the crime of the father?"

He said the exceptions they do advocate for are cases where the pregnancy endangers the mother's life.

He added that stopping the use of the morning after pill is also not one of their goals.