Many parts of Ireland have been hit with strong winds today as a result of Storm Barra.

Videos and pictures from across Ireland have shown the impact of Storm Barra, as strong winds continue to hit parts of the country.

Gusts in excess of 130 km per hour have been recorded in the southwest, but many parts of the country have seen severe weather conditions since early this morning.

Back inland, fallen trees and other debris have been blocking roads in some of the worst-hit counties.

Unsecured garden trampolines are often considered a particular hazard during storms, and there have been reports today of trampolines being blown out of gardens (including one incident in Kilkenny).

As storm Barra continues to affect the country we would ask the public to ensure that all Garden / Patio furniture and trampolines are secured. These objects, if unsecured can cause serious risk to the public and traffic.#StormBarra #StaySafe pic.twitter.com/tvsLJ7WtYu

Irish Rail was forced to suspend train services in Waterford after significant flooding on the tracks. Services have since resumed.

Due to flooding on the line at Waterford Station bus transfers are in operation between #Waterford and #Kilkenny Stations until further notice #StormBarra #WeatherWatch pic.twitter.com/sD6qOjtvu4

Meanwhile, there was traffic disruption on the M8 after a truck overturned on the motorway near Fermoy. 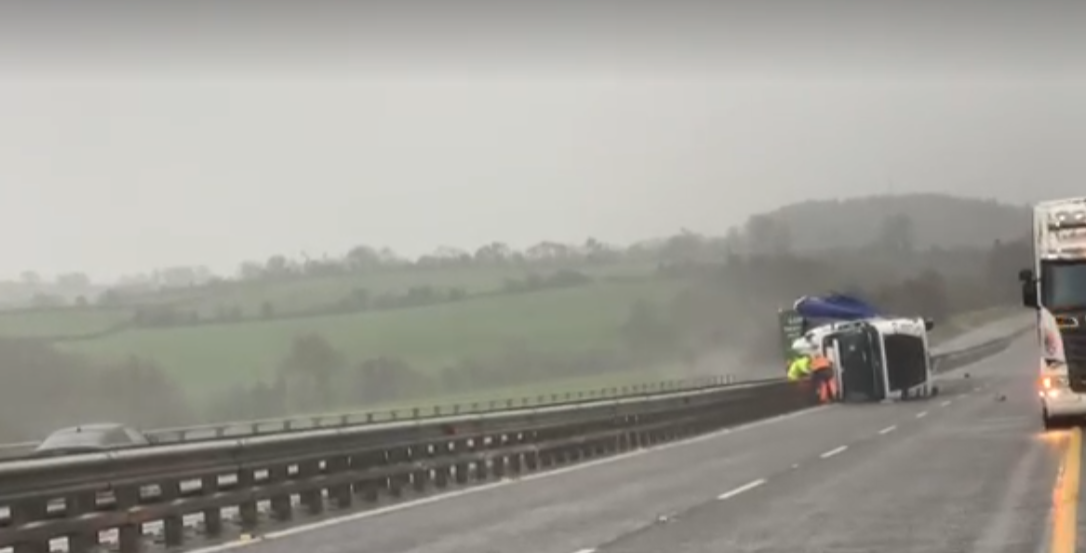 A truck overturned on the M8 near Fermoy. Image: Newstalk

As well as the strong winds, the storm has also brought heavy rain and flooding to parts of the country.

Parts of Donegal also saw blankets of snow this morning:

There had been fears Cork and some other areas faced the risk of significant flooding as a result of the storm.

However, Cork City Council says high tide passed this morning without significant damage to property, despite some flooding on the streets.

A red warning remains in place for the county until 9pm tonight, with authorities urging locals to exercise "extreme caution".

Main image: An unsecured trampoline wrapped around an electricity pole on Castlecomer Road in Kilkenny. Photo via Garda Twitter

ESB hoping to restore power to 30,000 homes and businesses by end of day