Updated 13:01pm Parts of the country are yet to see the worst of Storm Barra, according to Met É...

Parts of the country are yet to see the worst of Storm Barra, according to Met Éireann.

A decision on whether or not schools and colleges that were closed today should open tomorrow will be made by around 6pm.

A Status Red wind warning is due to remain in place for Cork and Kerry until 9pm this evening, with a Red warning due to come into force in Clare at 4pm.

An Orange warning will come into force in Leitrim and Sligo at 8pm and in Donegal at 2am tomorrow.

Wind speeds of 130km per hour have been recorded off the coast of Kerry this afternoon. 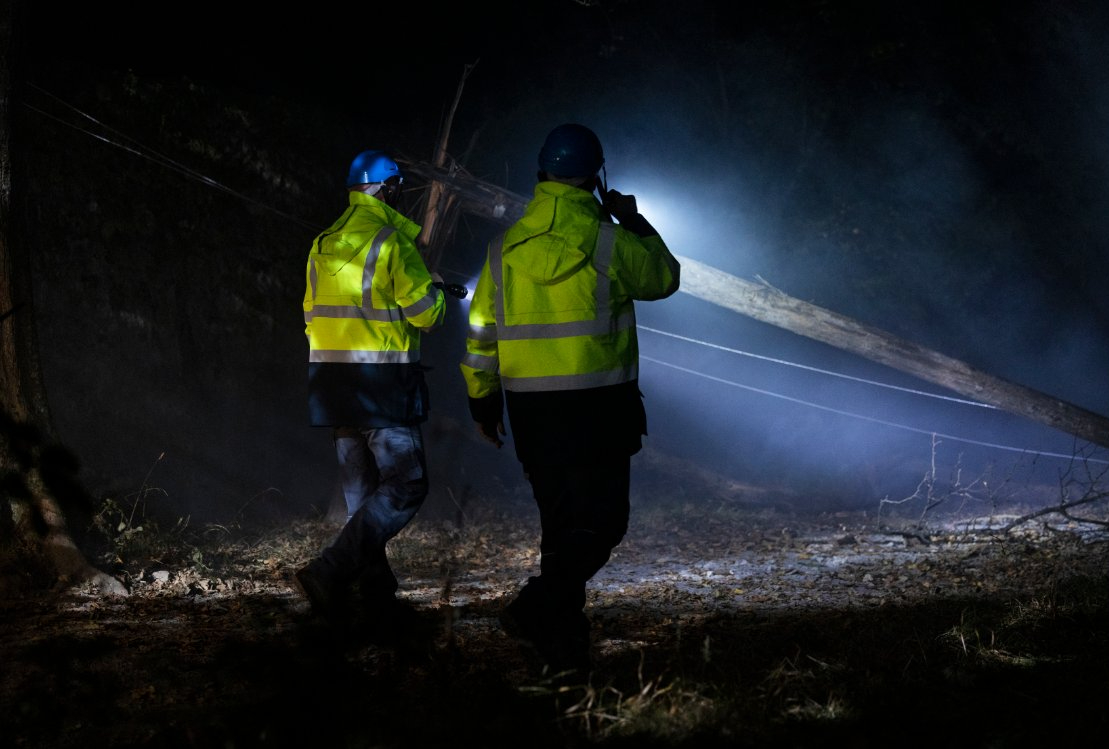 There are currently around 49,000 homes and businesses without power due to the storm.

Jim Hernan from ESB Networks told Newstalk that crews are working hard to restore power to those impacted.

“All of our available resources are mobilised since first light this morning so our full complement of internal staff and contractors are now available to respond to the storm,” he said.

“But given the nature of the alert this time - given that we are on red alert right the way through the day - we have had to kind of risk assess our response locally to make sure that our crews themselves are safe to get out and respond.”

Firefighters from North Strand are at trees down on Collins Avenue near Donnycarney Church, outside Scoil Ciaran.

Telephone cables have been pulled down.

The River Lee burst its banks in Cork city this morning as the storm brought wind speeds of over 110kph to the west coast.

Manager of the Imperial Hotel on South Mall in Cork City, Sinead Ryan, was among the staff rushing to divert floodwaters away from the building this morning:

“Just to get the flood barriers up before the water hits as you can see it is about two or three minutes away from getting into the hotel,” she said. “It just stops the lobby flooding and the café.

“The last time it flooded, it went up past our second barrier there which would be … I am only about 5”1’ and it was up past my ankles.”

The Housing Minister Darragh O’Brien told Newstalk Breakfast the storm has turned out to be 'as severe as predicted'.

“Preparations have been taking place for this event since late last week so we are well prepared and the local authorities have all the resources they need to carry out their really important work,” he said.

“I have just arrived n Dublin for Cabinet here and you can see that many people have heeded those warnings as well and are obviously working from home and staying in.”

The Chair of the National Directorate for Fire and Emergency Management crisis team, Keith Leonard, outlines what's happening along the west coast.

“In Clare, we have quite a few trees down and the winds are really picking up there,” he said.

“Galway city got off without too much … just some overtopping at the Spanish Arch. Limerick and Galway county are not too bad and Mayo has no reports of any serious issues yet.

“There is snow reported in some parts of Sligo and the wind is picking up now in Donegal as well.”

Schools in areas under orange and red warnings have been advised to close for the day, due to the ‘significant nature’ of the storm.

In a statement last night, the Department of Education said Met Éireann had warned of a ‘strong possibility or Orange warnings escalating to Status Red and as a result school in all orange and red areas should remain closed.

Gardaí are advising that all unnecessary travel should be avoided in the red and orange counties while the warnings are in place.

🛑⚠️Due to a red weather alert until 9pm this evening, the public are being urged to stay at home #StormBarra #CorkFloods pic.twitter.com/UFvWtct5ng

Last night, the National Directorate for Fire & Emergency Management’s Crisis Management Team said very strong winds and high tides would bring a risk of large coastal waves and the possibility of coastal flooding, particularly along southern and western parts of the country.

It warned that driving conditions will be dangerous with the fallen trees, fallen power lines and flooding from the heavy rain.

It said road closures are likely in western coastal counties.

The Road Safety Authority said people should avoid any travel in areas where a red warning is in place.

A number of COVID-19 test and vaccination centres in impacted counties are also closed, with full details on the HSE website.

People are also being advised to remain aware of the potential dangers once the storm has passed – with road users potentially having to seal with flooded roads and downed pylons, lines, trees, branches, and other debris which could block roads.

ESB hoping to restore power to 30,000 homes and businesses by end of day