Schools are finding it 'almost impossible' to find teachers.

With just a week to go before the back-to-school rush, principals are finding it ‘almost impossible’ to find teachers.

Yesterday, there were 378 classroom vacancies in Irish secondary schools and, when Special Needs Assistants (SNA) are included, that figure rose above 410.

The Association of Secondary Teachers in Ireland (ASTI) is warning that the majority of secondary schools have at least one vacancy as the summer holidays come to a close.

Around half the vacancies are in Dublin as teachers flee the capital in search of a lower cost of living.

“It is something that is countrywide, but it is exacerbated in Dublin and right out past the M50,” he said.

“The costs of living within Dublin - the cost of rental, the cost of travel - are making it much more attractive for teachers to move out of the city or maybe not even move in, in the first place.”

According to teacher’s jobsite EducationPosts.ie, there were 188 unfilled teaching posts in Dublin yesterday, rising to 206 when SNAs are included.

Cork had the second highest number of vacancies at 29, followed Meath with 21, Louth with 16, and Kildare, also with 16.

“They also may appoint somebody, and that person can leave the position within two to three weeks so, suddenly, with a week to go before schools open, you’re left with vacancies that you’re now scrambling to find people to take up.”

He said the difficulties in the capital are linked to a “perfect storm” of the city’s rental and fuel crises mixed with a secondary school population bulge that is adding to demand.

“Now we’re in critical situation that is going to be most challenging for schools over the next 12 months,” he said.

Mr McKenna said he has had to watch teachers leave because they simply couldn’t afford to live in Dublin.

“We would have seen situations where teachers, originally maybe from places like Wexford or Cork, are looking to move back,” he said.

“They can build down at home; they look for a position down at home so they’re leaving the cities where they really can’t get on the property ladder.

“The cost of fuel is now impacting as well, so people are not willing to travel distances because of that exorbitant cost at the moment.”

Mr McKenna has been a school principal since 2008 and said it has been “increasingly difficult” to fill teaching roles for the past five years.

“We are seeing a very, very challenging situation and no easy solutions,” he said

“It’s a major source of stress to senior leadership teams in schools to ensure they have an appropriately qualified teacher in front of a group of students beginning next week.”

The counties in Ireland with the lowest number of vacancies were Donegal, Monaghan, Roscommon, Kilkenny and Leitrim. 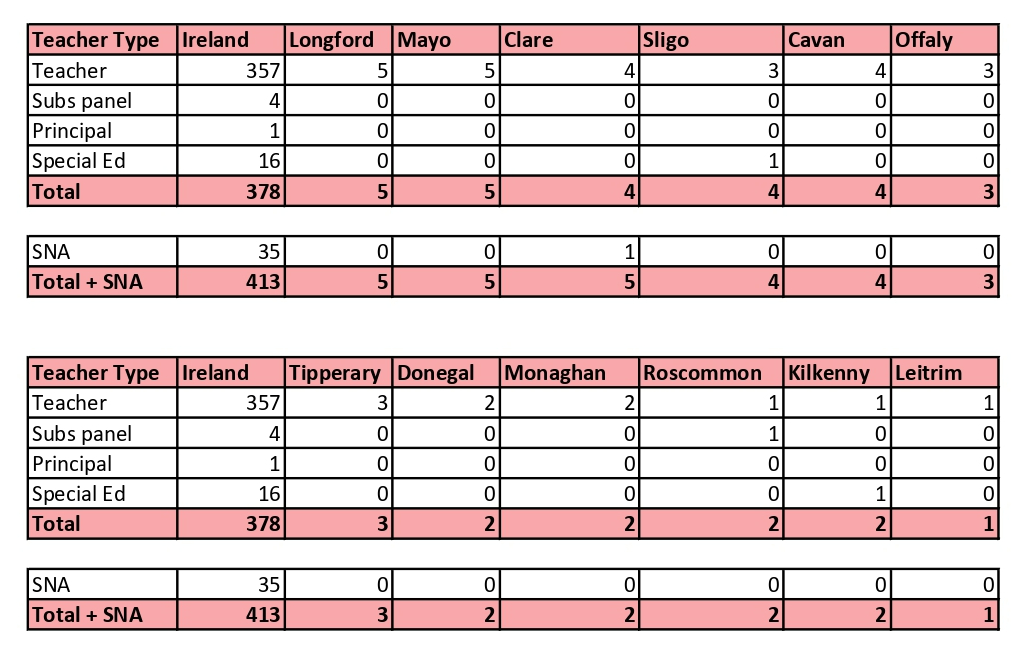 With reporting from Michael Staines.