Spanish riot police have clashed with protesters outside a football match between rivals Barcelon...

Spanish riot police have clashed with protesters outside a football match between rivals Barcelona and Real Madrid.

The match, held in Barcelona's Camp Nou Stadium on Wednesday, went off without a hitch and was halted only briefly when some fans threw balls onto the field bearing a message for the Spanish government to open a dialogue with Cataluña's separatists.

Thousands of police and private security guards were deployed in and around the stadium in a bid to keep the separatists from disrupting the game, which was viewed by 650 million people worldwide.

However violence erupted as riot police used batons to force the crowd back.

Some protesters threw missiles at officers who were lined up behind shields while others fought among themselves, and several plastic bags were set on fire.

Authorities later said at least 12 people were injured and two were arrested. 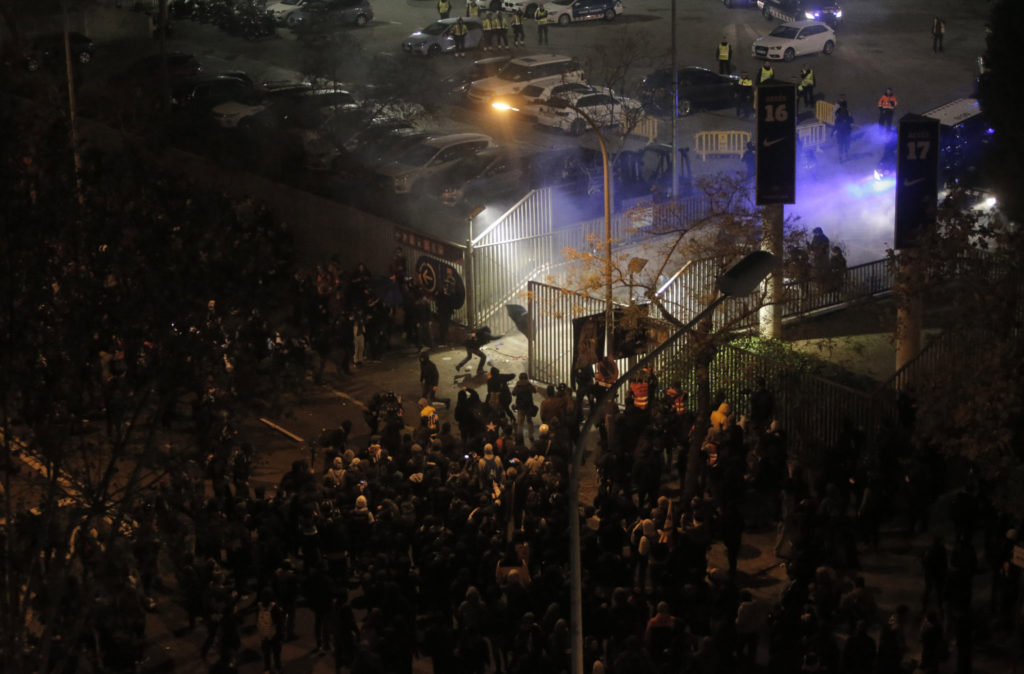 Demonstrators gather near the gates of the stadium toward the end of a Catalan pro-independence protest outside the Camp Nou Stadium in Barcelona, Spain | Image: Joan Mateu/AP/Press Association Images

When the game ended, some 100,000 spectators were directed to leave on the stadium's south side to avoid the clashes.

The match ended in a scoreless draw.

Known as El Clascio - the name given to any football match between the two - it had been postponed from October 26th amid violent protests by the separatists.

The rivalry between Spain's two largest cities is sometimes identified with opposing political positions - with Real Madrid viewed as representing the Spanish state and Barcelona seen as representing Catalan nationalism.

Security guards confiscated masks of Barcelona's Argentine star Lionel Messi from supporters as they entered the football stadium to ensure they could be identified on closed-circuit camera if they broke the law.

Fans held up blue signs saying "Spain, Sit and Talk" and "Freedom", while others chanted "Freedom for the Political Prisoners" in Catalan.

The messages and chants referred to the Spanish government's refusal to discuss the wealthy north-eastern region's independence, as well as the recent imprisonment of nine of the separatist movement's leaders, convicted for their roles in a failed 2017 secession bid.

Protest organisers said over 25,000 people signed up to demonstrate near the stadium in Barcelona, though it was hard to distinguish between protesters and fans. Some demonstrators briefly blocked main roads to the stadium before the game.

The Barcelona team asked its fans to behave with civility and not to affect the match.