A senior member of NPHET says he expects there to be an easing of COVID-19 restrictions from Apri...

A senior member of NPHET says he expects there to be an easing of COVID-19 restrictions from April or May.

Level five restrictions are set to be reviewed before April 5th after the Taoiseach announced the extension of lockdown measures last week.

Professor Philip Nolan, Chair of the Irish Epidemiological Modelling Advisory Group, says he expects widespread vaccination will be under way in the summer months.

It comes as 13 further deaths and 738 new cases of COVID-19 were confirmed by the Department of Health yesterday.

Speaking to On The Record with Gavan Reilly, Professor Nolan said restrictions can be relaxed once more people are vaccinated against the virus.

"I anticipate there will be some progressive easing of restrictions over time from April/May onwards," he stated.

"There will probably be a point at which we have quite widespread vaccinations and many of the restrictions call fall away quite quickly, particularly if vaccination is highly effective, as we hope it might be, in interrupting transmission.

"But really until we come close to eliminating this virus, probably through the impact of vaccination, there's certain settings that we're going to have to be really, really careful in."

We are likely to continue wearing masks, being careful with our hand hygiene and not being crowded into one setting "for a while", he added.

"But many of the other restrictions I really would hope can start to fall away in the course of the summer."

In assessing what kind of case numbers we need to be at in order to safely reopen society, Professor Nolan said we need to factor in "the time between any reopening and vaccination".

"Over the coming weeks, two things are going to happen," he stated.

"One, case numbers will continue to decline but two, we're going to get more certainty about when will people be vaccinated and how effective that vaccination is going to be.

"Right now we're in a vulnerable period where if we open up too much, we will get a really significant fourth wave of disease.

"So quite rightly, Government is being exceptionally cautious now not to trigger something that might have the disease back out of control again.

"But when we're looking particularly to May, June, July, at that point we should be seeing really widespread vaccination of the population under way and we should also know what is the effect of that likely to be on transmission."

The risk assessment to be taken by the Government then will be different from the risks now, he added. 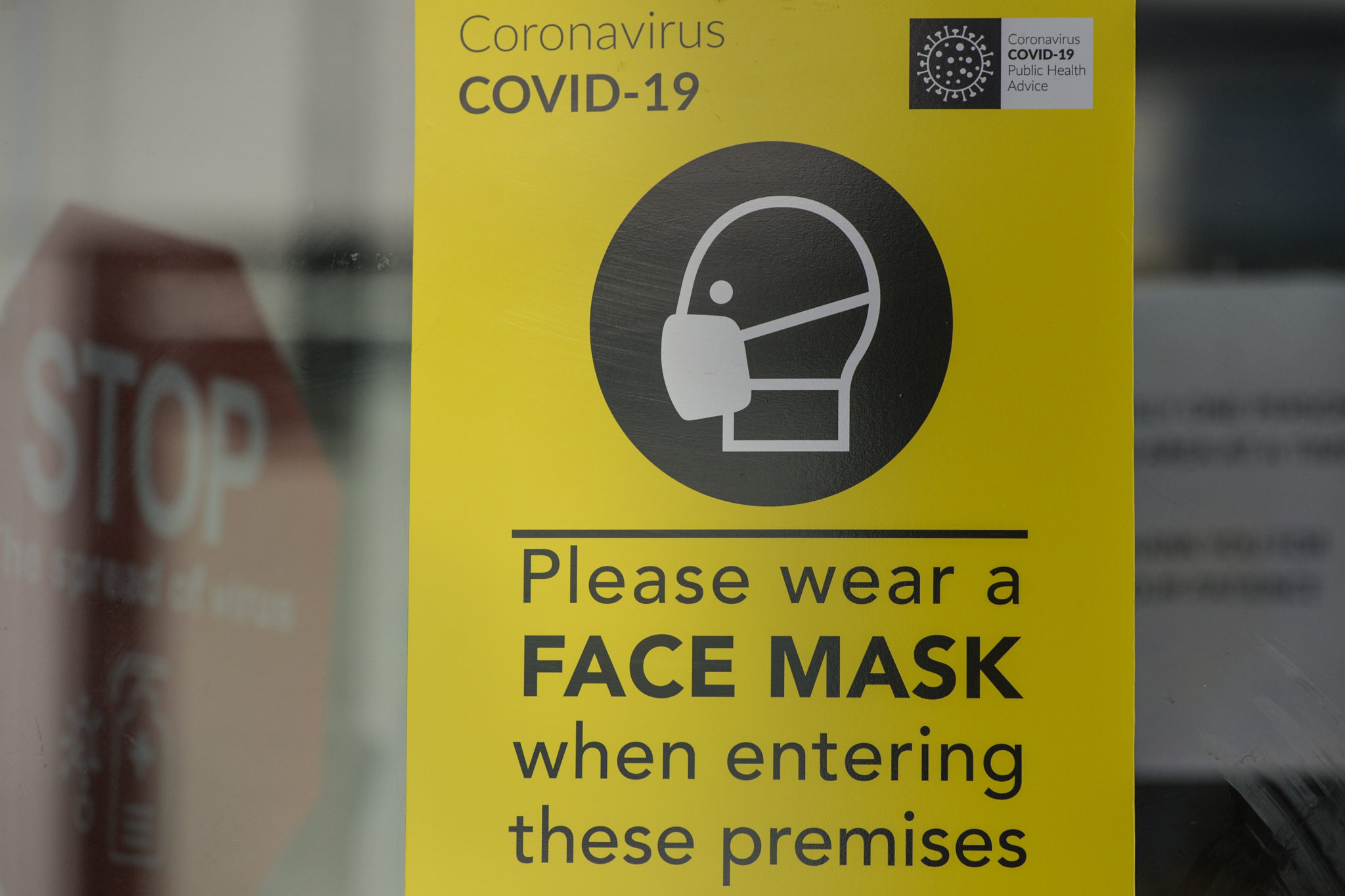 A 'please wear a face mask when entering these premises' sign seen at the entrance of a coffee shop in Dún Laoghaire area in Dublin. Credit: Cezary Kowalski / SOPA Images/Sipa USA

Professor Nolan continued: "So we do factor that in, and it is going to be transformative over the coming weeks as we become more certain about our options coming into the early and middle parts of the summer.

"The fact that we have several highly-effective vaccines rolling out in the spring is really quite extraordinary."

Meanwhile, speaking on the same programme, Tánaiste Leo Varadkar said the Government is not setting "a specific metric" or target number on when restrictions might be eased as case figures, hospitalisations and variants all need to be taken into account.

He said the numbers are coming down and it seems like "we're going in the right direction", even if it's "slower than we might have liked.