Northern Ireland has marked a milestone of 1,000 days without a working devolved government at St...

Northern Ireland has marked a milestone of 1,000 days without a working devolved government at Stormont.

Britain's Northern Ireland Secretary of State Julian Smith says: "Never has there been a greater need to get Stormont back up and running again."

In a tweet after the meeting, he said: "A useful meeting with @MaryLouMcDonald this evening.

"Tough issues to get through - will keep trying to find a way through."

Northern Ireland has been without a devolved government for #1000days. Never has there been a greater need to get #Stormont back up and running again. pic.twitter.com/7lRMdAiWXE

Elections were last held there in March 2017, but efforts to form a new executive have repeatedly stalled.

The executive collapsed amid the scandal over a botched renewable heating scheme.

If Stormont is not back up and running by October 21st, the British government will make legislative changes which will see abortion and same-sex marriage legalised in the region.

It has published guidance for the medical profession in Northern Ireland.

It was introduced in order to give more time for the Northern Ireland parties to agree to return to the executive.

The act requires that regulations are made to extend same-sex marriage and opposite sex civil partnerships to Northern Ireland by January 13th 2020.

It also gives effect to recommendations set out in a United Nations Committee report in respect of lawful access to abortion services by March 31st next year. 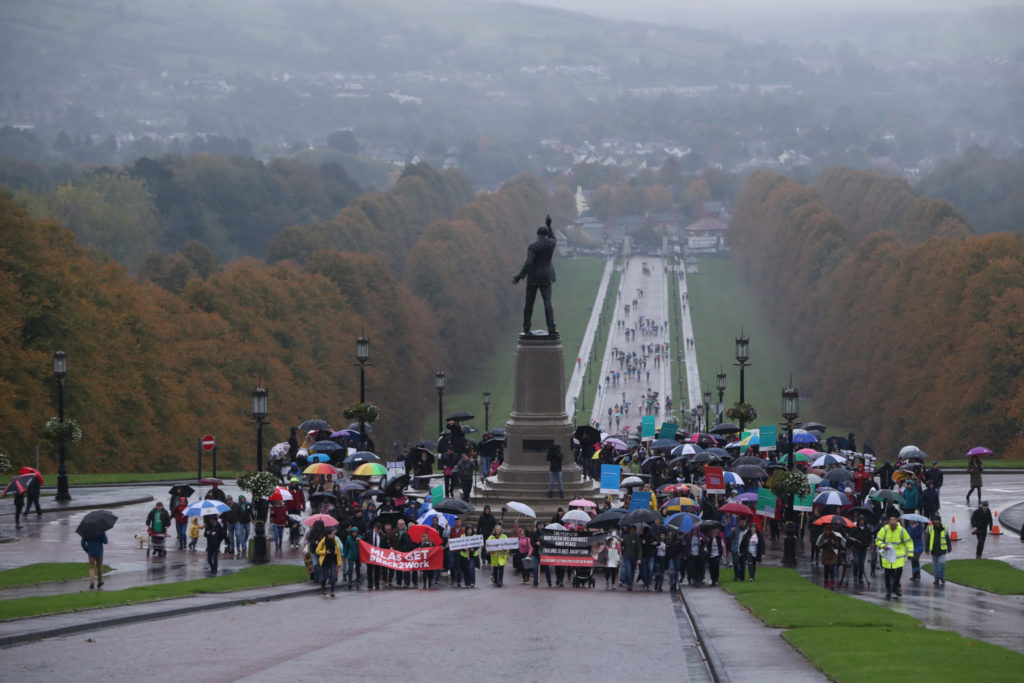 1,000 people march near to the Parliament Buildings at Stormont in Belfast, to mark 1,000 days since the devolved institutions there collapsed | Image: Niall Carson/PA Wire/PA Images

A public consultation on a proposed legal framework will open on or shortly after October 22nd.

Regulations will then be made to enact a new legal framework for abortion in Northern Ireland to come into force.

The British government says: "It has always been the government's strong preference for decisions on sensitive, devolved matters such as these to be taken by the locally elected representatives of the people of Northern Ireland.

"The restoration of the executive and assembly is of vital importance to the people of Northern Ireland.

"This is the top priority of the Secretary of State and he is continuing to work with the Northern Ireland parties to meet that objective."

If the executive is not restored by October 21st, London says it will provide more information as work to prepare these regulations continues - including the period to give notice of intention to marry or form a civil partnership.

The issue of a lack of devolved government was brought back to the fore in April, during the funeral of Lyra McKee.

Fr Martin Magill urged politicians to work together to produce a better life for young people in the North.

He was greeted with a standing ovation after he asked Northern Irish leaders why "in God's name" it took the "death of a 29-year-old woman with her whole life in front of her" for them to stand together.