A new app is being launched to help victims of domestic violence.

'Bright Sky Ireland' offers support and information for anyone who may be in an abusive relationship, or those concerned about someone they know.

It is a joint venture between Women's Aid and the Vodafone Ireland Foundation.

The free app includes various information and support tools, including a method for victims to capture evidence of abuse.

This  feature is designed to log incidents of domestic abuse without any content being saved on the device itself.

It enables users to send information about incidents in a secure digital journal, using a text, audio, video or photo function.

Evidence collated through this function will enable Gardaí to intervene and can help secure prosecutions.

It allows users to locate their nearest support centre by searching their area, Eircode or current location. 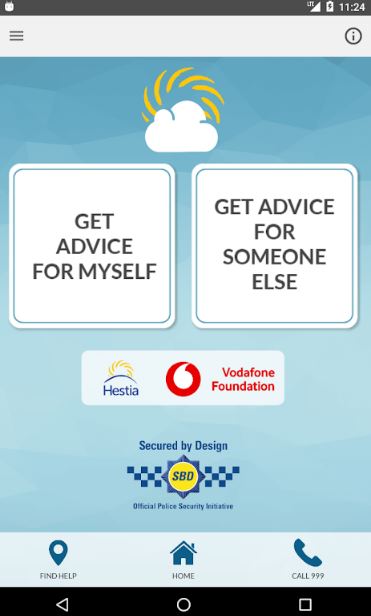 It also provides links and maps to services.

A short questionnaire will help users assess the safety of a relationship, while also providing information about different forms of abuse such as sexual violence, stalking and harassment.

The app also highlights the types of supports available, steps to consider if leaving an abusive relationship and how to help a friend affected by domestic abuse.

This follows the recent launch by Vodafone Ireland of a workplace policy for victims of domestic abuse.

Research conducted at the time highlighted that 31% of Irish workers had identified as having suffered from some form of domestic abuse or violence, and 57% felt safer at work compared to home.

Of the 500 men and women who participated in Ireland, the survey found that 31% had experienced some form of domestic abuse.

While Women's Aid revealed earlier this year that 20,722 disclosures in relation to domestic violence were made to it in 2018.

Its impact report detailed 19,089 contacts with direct services - including its 24 hour National Freephone Helpline and one to one support services.

During these contacts, 16,994 disclosures of domestic violence against women were noted.

There were also an additional 3,728 disclosures of child abuse made.

It found one-in-four women who contacted Women's Aid were experiencing abuse from a former husband or partner (27%).

Vodafone Ireland CEO Anne O'Leary says: "Unfortunately domestic abuse impacts many people across Ireland, with victims in some cases unable to get the support and guidance they desperately need.

"Following a successful rollout in the UK, I am extremely proud to launch Bright Sky in Ireland to provide victims here with a localised information and support portal."

"A very important feature of the app is the myth busting information as well as quiz to help people recognise the signs of abuse.

"However, our biggest hope is that the ability to log incidents of abuse whether it's photos, text notes or recordings, will help women experiencing abuse gather the pattern of evidence they need to avail of legal protection and secure convictions of the new crime of coercive control."