Over 20,000 domestic violence disclosures made to Women's Aid last year

The charity Women's Aid has revealed that 20,722 disclosures in relation to domestic violence wer...

Over 20,000 domestic violence disclosures made to Women's Aid last year

The charity Women's Aid has revealed that 20,722 disclosures in relation to domestic violence were made to it in 2018.

Its impact report has detailed 19,089 contacts with direct services - including its 24 hour National Freephone Helpline and one to one support services.

During these contacts, 16,994 disclosures of domestic violence against women were noted.

There were also an additional 3,728 disclosures of child abuse made.

It found one-in-four women who contacted Women's Aid were experiencing abuse from a former husband or partner (27%).

The organisation also released a new information guide to coercive control, which became an offence on January 1st.

The annual snapshot provides an insight into the level and nature of abuse experienced by women and children in homes and relationships across Ireland.

The charity has highlighted strong links between child abuse and domestic violence, and is calling for greater recognition of the risk to children - especially during access arrangements with domestic violence perpetrators.

The organisation also expressed "disappointment" at the recent Joint Oireachtas Committee hearings on Reform of the Family Law system failure to invite frontline domestic violence services to feed in the concerns of women and their children experiencing abuse.

Margaret Martin is the director of Women's Aid: "Women told our confidential services that they had been isolated from family and friends, called derogatory names, had their lives and their safety threatened.

"Women disclosed that they were hit, beaten with weapons, stabbed and cut with knives and strangled.

"For some women they were beaten and strangled while they were pregnant.

"We heard from women that their partners had raped them, coerced them into sex, had prevented access to family planning and some had explicit videos and images made and shared online without their consent.

"Many women said that because of financial abuse they were being forced to choose between staying in an abusive relationship and facing poverty.

"Financial abuse disclosed in 2018 included partners running up debt in women's names, women being denied access to the family finances and women's salaries or social welfare being controlled." 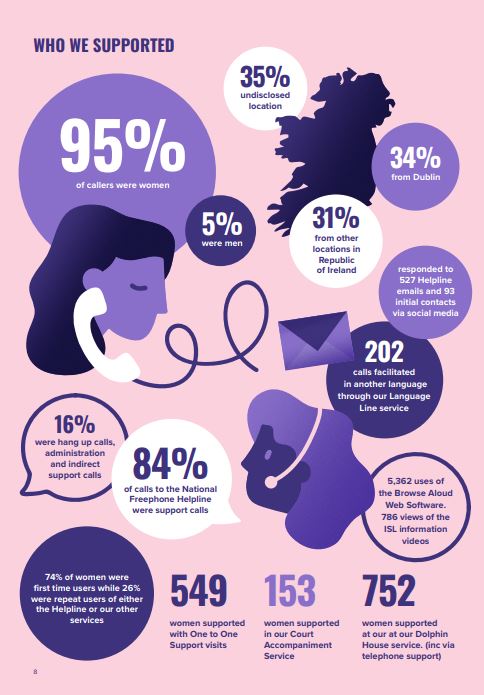 Last year, the group responded to 15,835 calls on its National Freephone Helpline - that is 44 calls per day.

It also met with just over 1,300 women in its Dublin-based one to one support services.

Ms Martin said: "During these contacts women revealed the horrific abuse by their boyfriends, partners and husbands and the impact on their emotional and physical well-being.

"Women were left with broken bones and teeth, bruising, head injuries and internal injuries as a result of rape.

"Some women experienced miscarriage because of an assault while others were experiencing post-traumatic stress, anxiety, depression and exhaustion."

Women said that on 3,729 occasions, their children were being hit, slapped, shouted at and called names, and in some cases sexually abused.

At times, the perpetrator of the abuse has deliberately targeted the children as a way to hurt both them and their mother.

But the charity has warned of "a scandalous situation" in Ireland, where refuge space for women and children is way below European recommendations.

Ms Martin said: "Currently, Ireland only has one third of emergency accommodation recommended by the Istanbul Convention and the refuge places that do exist are often full to capacity.

"When the National Helpline staff and volunteers have tried to find a refuge place for women and her children, on 52% occasions, the refuge was full.

"This is an unacceptable situation and leaves our support workers having to tell women and their children that there is no safe place to go on too many occasions."

Coaches 'cannot leave the same kids on the sideline week in, week out' - Kieran Cuddihy