Mica families from Donegal have launched legal proceedings in the High Court against suppliers of...

Mica families from Donegal have launched legal proceedings in the High Court against suppliers of the building blocks used to construct their crumbling homes.

The Government have announced a redress scheme for affected families but not all families are eligible - much to their consternation:

“So we have done a repair in 2017 and now our home is crumbling again,” one woman told Newstalk Breakfast.

“So we’re right back at the very start. We’ve spent €40,000, we can’t use the scheme that the Government are proposing because we’ll need possibly another €80 to 90,000 to rebuild our home along with the grant.

“So that money is out of reach.”

Another man wearily insisted that legal proceedings were “the only route” left for homeowners who wished to recoup their money.

“This is a nationwide [scandal]. It’s all over Ireland so if they think that €2.5 or whatever amount of billion they’re chatting about…” his voice trailed off. 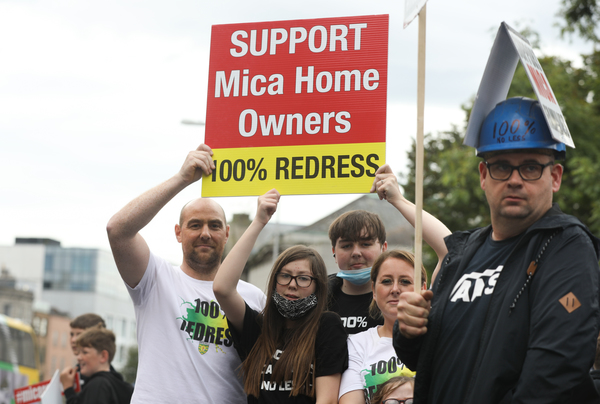 ‘My house is cracking’

Donegal is the most affected county in the country and even young children are intensely aware of the crisis that is keeping their parents awake at night. Kids sing about it in the playground and gossip about who lives in a mica house on the school bus.

The impact of the scandal will be felt for years to come and one father said it has put such pressure on his family finances that he did not think he would be able to afford to send all his kids to college.

“It has a big impact on the family,” he explained.

“I have six kids under the age of nine and I have a three-year-old outside singing, ‘My house is cracking.’

“So my three-year-old knows that my house is falling apart. That’s devastating to me.

“And as far as I’m concerned, is it college fees for six or fix the house? Because it’s not going to be both.”

The case is being funded by a not for profit group called Defective Blocks Ireland - founded by two businessmen, Shaun Hegarty and Adrian Sheridan, who are both originally from Donegal.

The group has guaranteed that plaintiffs will not be exposed to any adverse costs if their cases fail but for many it is not just about the money. After years of crumbling buildings, playground songs and sleepless nights, there is a burning desire for justice among the mica families of Donegal.

Number of people rescued after heavy rain in the north-west