Mary McAleese has criticised groups in the North for sticking to their "red lines" while asking ...

Mary McAleese has criticised groups in the North for sticking to their "red lines" while asking others to give up theirs.

The former Irish president was speaking in the wake of the killing of Lyra McKee.

The journalist's death has led to renewed calls for politicians in the North to focus on restoring power-sharing - and talks are now set to resume in the coming weeks.

One of the most high-profile calls for action came from Father Martin Magill during Lyra's funeral. 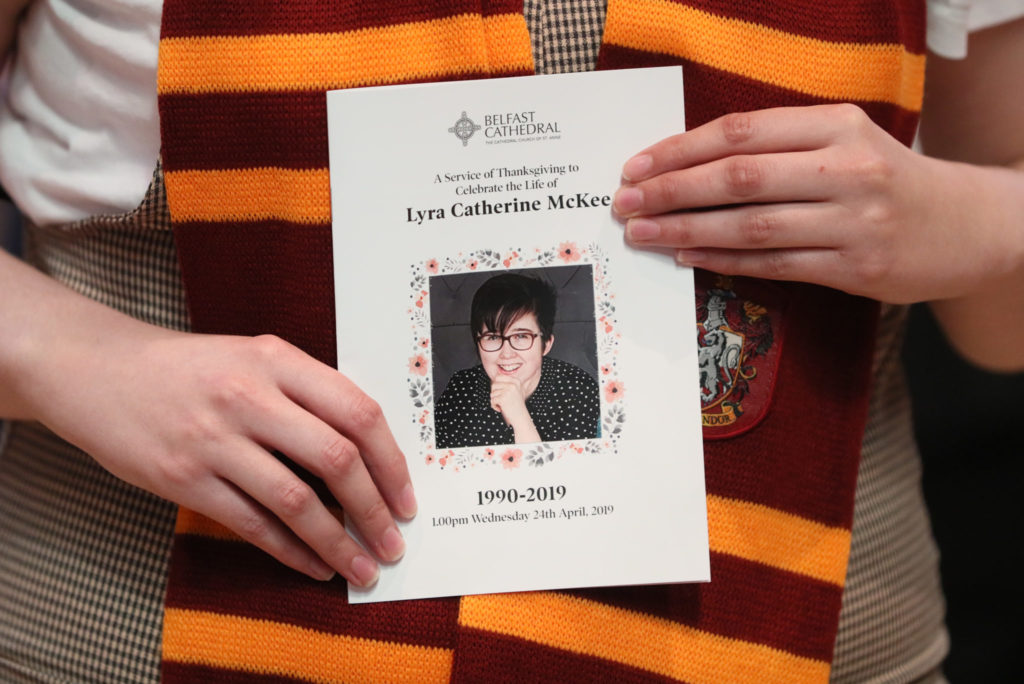 A mourner wearing a Gryffindor scarf holds an order of service as she arrives for the funeral of murdered journalist Lyra McKee at St Anne's Cathedral in Belfast.

In remarks that drew a standing ovation, Fr Magill asked Northern Irish leaders why “in God’s name” it took the “death of a 29-year-old woman with her whole life in front of her” for them to stand together.

Mary McAleese, who was in office when the Good Friday Agreement was signed, said she "wasn't as overwhelmed" as many others were with the speech.

Mrs McAleese suggested that if politicians could be 'embarrassed' into acting, that would have happened already.

She observed: "We've been here before many, many times before - after Omagh, after so many other events.

"The overwhelming majority of people in Northern Ireland are not wedded to the use of violence... they want to solve [problems] by consensus and debate.

"Do I think Lyra's death will change anything? Probably not unfortunately.

"Will it change, for example, Fr Martin Magill's church?... Will they get into a conversation about what [Lyra's] life was like when she had breath in her body thanks to the teachings that helped to conduce the homophobia she encountered in Catholic school and Catholic neighbourhood? I think there are profound questions there to be asked.

"We really need to unpack this complex situation a lot more profoundly and in depth than maybe one line in an emotional speech on an emotional day is capable of doing."

'Everybody has their red lines'

Mrs McAleese said the politicians showed up to show solidarity on the day of Lyra's funeral, but haven't gotten together for substantial talks on restoring power-sharing over the past year.

She observed: "The reasons for that are very, very well-known - because of the red lines that have been set, the failure to really enter into the spirit of the Good Friday Agreement."

She suggested many politicians' red lines are drawn from the community, and that others have similar red lines.

She argued: "Everybody has their red lines they are not prepared to sacrifice.

"It's easy, in a way, to stand on a platform and demand of others that they move without making the sacrifice of moving yourself. That's how it's always been, and the Good Friday Agreement was the big occasion when history changed that."

However, she added: "I have to say that in recent days, from all sides - Church and State, to be honest - I have heard people who want to hold to their red lines while asking others to give up theirs. And that's depressing, because it's not going to be enough."

Speaking more generally about the political situation in Northern Ireland, Mrs McAleese said the situation is growing more complex due to factors such as changing demographics and Brexit.

However, she also highlighted what she suggested is the "lack of political leadership" in the North.

She observed: "Ian Paisley, Martin McGuinness, Peter Robinson, David Trimble for example... these were all what I'm going to call weathered politicians.

"Leaders should be able to push out into the deep - out into places where they know their constituency is nervous about going, maybe even has been taught never to got to.

"We had that with those men. Unfortunately, when they left the political arena, the baton handed on to - it seems to me - to people who do not have that same level of experienced leadership, or that same confidence in pushing out into the deep."

Mrs McAleese added: "I think we are looking at an issue to do with political inexperience, and we really don't have the time for them to grow to the same level of political experience. As we can see, the wheels are beginning to come off because of the lack of that."