Administrators to Jamie Oliver's restaurant chain in the UK say 22 sites have closed, resulting i...

Administrators to Jamie Oliver's restaurant chain in the UK say 22 sites have closed, resulting in 1,000 redundancies, after the business collapsed.

KPMG said attempts to bring fresh investment into the celebrity chef's business - at a time of rising costs and fragile consumer confidence - had failed.

The business was left without enough cash to trade while in administration, meaning that all but three of its 25 eateries have closed.

Three sites in London's Gatwick Airport will continue to trade "in the short term", KPMG said.

Jamie Oliver said he was "deeply saddened" as the collapse was announced.

It will predominately impact the chef's Italian restaurant chain - which has 23 outlets in the UK - but also his Barbecoa steakhouse and Fifteen restaurant in London.

There is one Jamie's Italian restaurant in Ireland, located in Dundrum Town Centre - but the UK company has said that the firm's international restaurant franchise business will continue to trade as normal.

The Irish Times reports that the franchise operator here is still planning to expand in the coming months.

In a statement confirming the UK administration, Jamie Oliver thanked all staff and suppliers - saying he was "deeply saddened by this outcome". 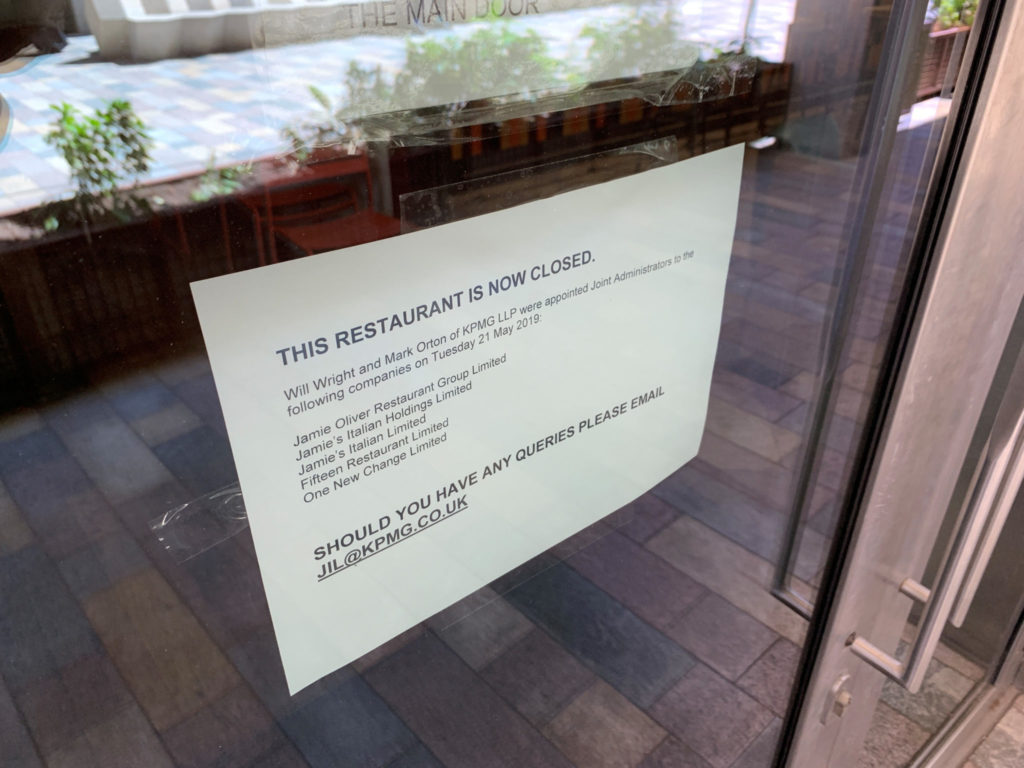 A sign in the window of a Jamie's Italian in Victoria, central London, as the restaurant chain founded and majority-owned by celebrity chef Jamie Oliver, has appointed administrators, putting as many as 1,300 jobs at risk. Picture by: Richard Canham/PA Wire/PA Images

He said: "I appreciate how difficult this is for everyone affected.

"I would also like to thank all the customers who have enjoyed and supported us over the last decade, it's been a real pleasure serving you.

"We launched Jamie's Italian in 2008 with the intention of positively disrupting mid-market dining in the UK high street, with great value and much higher quality ingredients, best in class animal welfare standards and an amazing team who shared my passion for great food and service. And we did exactly that."

I’m devastated that our much-loved UK restaurants have gone into administration. I am deeply saddened by this outcome and would like to thank all of the people who have put their hearts and souls into this business over the years. Jamie Oliver

Jamie's Italian has faced significant financial challenges in recent years, with Mr Oliver previously having invested stg£13 million (€14.8 million) to save the chain from bankruptcy.

Twelve of the company's outlets had previously been closed in a bid to save the business.