Activist and bar owner Panti Bliss - aka Rory O'Neill - has said homophobic graffiti painted near her bar shows why the country still needs to mark Pride.

Gardaí are investigating a report of criminal damage involving the graffiti on a building in Dublin city centre on Sunday.

It happened on Capel Street and no arrests have been made.

The news comes after Panti shared a photo of the Etsy building, painted with a homophobic slur, with an arrow pointing towards nearby PantiBar.

The graffiti has since been removed.

The #DublinTown clean team attended that straight away and it has now been removed. pic.twitter.com/BpprHcfidF

It comes as Ireland marks Pride 2021 - an annual celebration of inclusion and diversity.

Panti told The Hard Shoulder this is an example of why Pride still exists.

"Shane, the bar manager, saw it first and showed me the picture - and it was done sometime around midnight last night, just after we'd closed apparently.

"About two years ago during Pride was when somebody through a brick through our window, that they had gaffer-taped around and had written in poorly-spelt Irish 'Fags Out'.

"And so this happening during Pride now as well - I'm disappointed, and I have to say you can't help but be a bit gutted when you see it.

"But also, in some ways, it's a good reminder of why we still need Pride - which is something that people often throw at you.

"In that sense, maybe it reminds me of why we have Pride at all".

Panti said the building it was painted on, Etsy, is proudly flying the Pride flag.

"It's lovely to see that as soon as DublinTown came along and painted over it, the people in Etsy had Pride flags hanging out the window over it as well.

"So that also reminds me that there is mostly good people in the world." 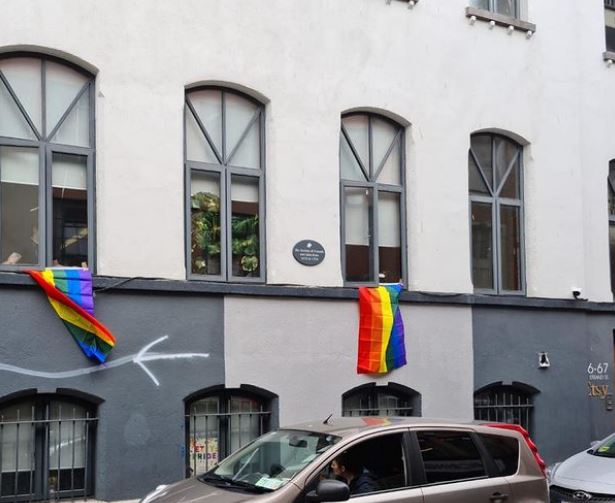 The painted over graffiti on Dublin's Capel Street. Picture by: Instagram/pantibliss

'Very much in the minority'

Panti said the people behind these incidents are in the minority.

"With the brick through the window thing we actually caught the guy - and often as is the case... when you see him you think 'He's got his own problems.'

"I think the kind of people who end up doing these things are very much in the minority and are isolated in many ways."

And she said she has also receives letters in a similar vein.

"It's very easy to write to me because people can just write to the bar, they don't have to go looking for an address.

"So I do get a lot of letters from people; very often they're nice, but also more than is nice they're horrible.

"I don't want to characterise them too meanly, but they're often scrawled, hand-written messages - often talking about 'We're all going to burn in hell' or these kind of things.

"We've been there for 13 years, so it's quite a long time, and in a couple of times over those 13 years we had to go to the police because the things were just a little more threatening than the standard.

"While is is rare that it sort of manifests in the real world, that sort of dull hate is still out there - and occasionally we're made aware of it".

But Panti added that the change here, since she gave her 'check yourself' speech in the Abbey Threatre in 2014, has been remarkable.

"We have made incredible, inspiring strides in this country.

"The change has been remarkable, and I think it's something we can all be very proud of.

"Just before the pandemic, I was down in the small Mayo town that I'm from because the local youth club was launching a little booklet that they had produced and written and everything - a guide to coming out.

"[It] was just mind-blowing - the journey and change has been really remarkable and incredible and worth celebrating.

"But that doesn't mean that every single person is onboard and is delighted for the gays.

"Mores a pity for them - but it is certainty worthwhile appreciating what we've managed to achieve, and giving ourselves a bit of a pat on the back sometimes.

"When Pride comes around, there's always a big discussion whether it should be a party and a celebration or a protest.

"I think it needs to be both: I think we can celebrate how far we've come, but we also have work yet to be done".

The incident also comes after Pride flags were twice vandalised in Waterford in less than a week.

The flags were cut down overnight and removed from flagpoles last Friday.

While earlier in the week, the flags were lowered and burned outside the council offices.

Once again it’s my sad duty to report that the Pride Flags were cut down overnight and removed from the flagpoles on The Mall. A truly despicable act.
It’s now once again in the hands of the Gardai. pic.twitter.com/cJgTrWqyOv