A new global report on news consumption has found Irish people are turning increasingly to digita...

A new global report on news consumption has found Irish people are turning increasingly to digital news media for information.

While TV remains the main source of news overall (33%), radio (13%) continues to poll strongly in Ireland - with more Irish consumers citing this medium as their main source of news than counterparts in the UK (10%), North America (6%) and the EU (8%).

Irish news consumers also have a stronger relationship with local news than elsewhere in the world.

But there is a large variation between the size and character of local news markets in these regions. 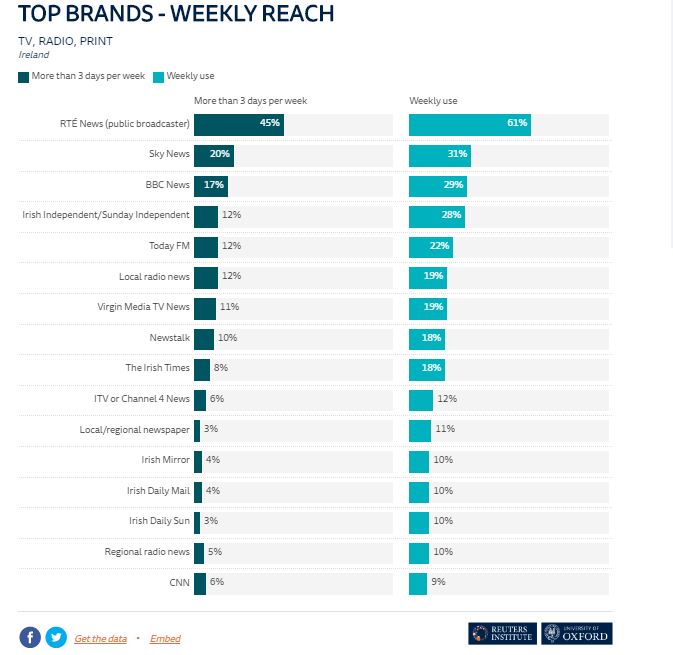 Local newspapers are the most used source of local news in Ireland, at 46%, with radio at 37%.

The research also found a growth in listening to podcasts in Ireland, up three percentage points to 40% since last year.

Those under-45s are the largest demographic listening to podcasts, particularly 18 to 24-year-olds, 72% of whom said they had listened to a podcast in the past week.

In terms of trust in news, 48% of Irish respondents agreed they could trust most news most of the time, with 27% claiming distrust in media. 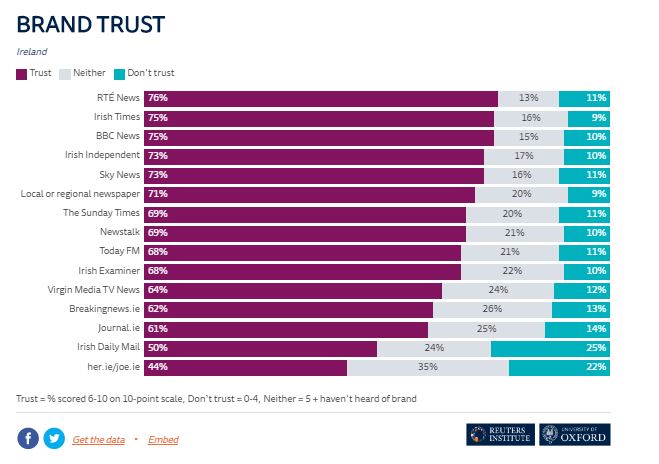 The majority of Irish respondents showed a preference for objective, balanced news - with 56% getting news from sources that do not have a particular point of view, and 14% seeking sources of news that challenge their point of view.

While 62% of Irish people said they were concerned about what was real and fake on the internet - the sentiment is similar in the UK and Europe.

The corresponding figure for North America was 67%, with the figure for those who were 'very concerned' at 29% - substantially higher than Ireland and the UK at 18%.

Just 7% said they were concerned about false or misleading information from journalists or news organisations.

Paying for online news in Ireland remains unchanged at 12%, which is in line with the rest of the EU. 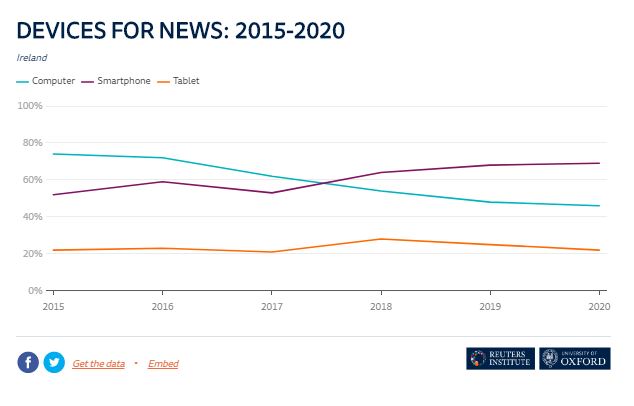 Younger people, however, are increasingly paying for news online - with the highest growth rate among the 18 to 34-year age group.

Taking out an online subscription to a news title is the most common way to pay for news (40%), but there has been an increase of five percentage points in the past year in those making a donation to a digital news service - up from 18% in 2019 - to 23%.

Generally, the report found that 66% of Irish respondents believe that journalism is either very or extremely important for the proper functioning of society.

Some 36% of that number believe it is extremely important – on a par with the EU average.

Five percent of Irish respondents believe that it is not important. 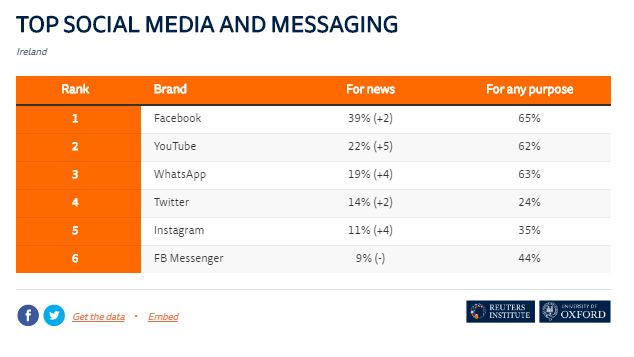 The Broadcasting Authority of Ireland (BAI) funded the inclusion of Ireland in the Reuters Institute Digital News study, which covers 40 countries.

Chief executive of the BAI, Michael O’Keeffe, said: "Much has changed since the data for the 2020 Digital News Report was collected a few short months ago.

"One of the recurring themes for public health officials during the pandemic has been the importance of accessing reliable information from trusted sources.

"Thankfully, this report shows that citizens in Ireland have access to, and rely on, credible information provided by established news sources.

"However, there is no room for complacency regarding the sustainability of our news provision ecosystem.

"The fragility of the funding model that underpins the provision of indigenous news in Ireland has been a recurring theme in the Digital News Report since it was first published in 2015.

"Traditional revenue sources have been eroded and sustainable new ones have yet to emerge.

"While there is some evidence that online subscriptions have increased during COVID-19, it’s not clear if these will be sustained or if any additional revenue from this source will replace lost advertising."