Ireland weather: One more day of 28C heat ahead of big change

Sunday is set to be the last day to enjoy the high temperatures brought by the tail end of the he...

Ireland weather: One more day of 28C heat ahead of big change

Sunday is set to be the last day to enjoy the high temperatures brought by the tail end of the heatwave in Ireland.

Some areas will continue to bask in heat reaching the high 20s today before conditions change from Monday onwards.

Met Éireann is forecasting a dry day in many areas today with spells of sunshine, but with mist and fog lingering on some western and northern coasts.

Scattered showers will develop in the afternoon, with the odd heavy or thundery shower likely in the west.

The national forecaster says it will be "very warm or hot with highest temperatures of 22 to 26C generally but reaching up to 27 or 28C in parts of the midlands".

Tonight will be mostly dry, but with cloud thickening in the west towards the morning, with lowest temperatures between 11 and 15C.

More rain will be expected from Monday onwards, with an unsettled week ahead.

Tomorrow will bring showery outbreaks of rain to western coastal counties through the morning and afternoon, spreading eastwards in the evening.

Dry & sunny in most areas today, some mist & fog will linger on western & northern coasts🌤️

Well scattered showers will develop in the afternoon, with a heavy or thundery shower likely in the west ⛈️☔️
Warm with highs of 22 to 26°C, locally hotter in the midlands 🌡️ 📈 pic.twitter.com/BjLo8RKdtS

Met Éireann said: "The rain will have embedded heavy or thundery bursts at times. Overall cloudy or overcast, with occasional bright or sunny spells in the east early on.

"Less warm than of late with highest temperatures of 19 to 23C generally, but cooler in western and northwestern coastal counties with highs of 17 or 18C."

The showers will be confined to the east of the country tomorrow night, with temperatures of 13 to 15C.

The conditions associated with the cooler and unsettled week will become more apparent on Tuesday thanks to the arrival of more rain and even some thundershowers.

"Becoming largely cloudy on Tuesday with scattered showers spreading across the country from the west, turning heavier and more frequent as the day goes on with occasional thundery bursts," Met Éireann added.

"A cooler day than of late with highest temperatures of 16 to 20C in a light to moderate northwest breeze."

The showers will continue on Tuesday night, with clear spells also, and lowest temperatures of 10 to 13C.

Wednesday will bring "a mix of showers and sunny spells, with the showers again turning heavy and possibly thundery through the day", and highest temperatures of 15 to 18C.

Scattered showers will continue on Wednesday night before a spell of showery rain moves into the northwest towards morning, with lowest temperatures of 10 to 13C. 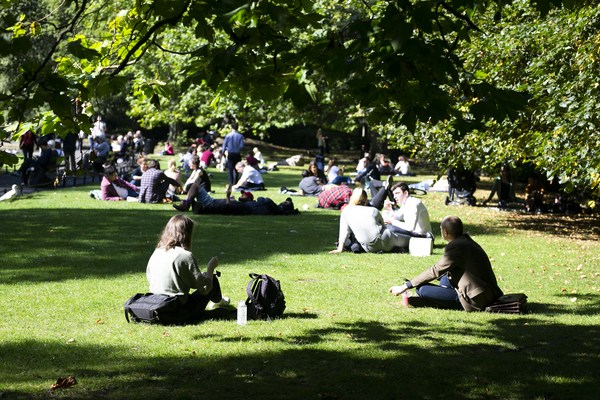 Met Éireann forecasts that Thursday will be a largely cloudy day with showery rain moving southeastwards across the country, occasionally turning heavy.

The mercury will rise to between 16 and 20C.

Looking ahead towards the end of the week and the weekend, it will remain "generally unsettled", with showers feeding in from the northwest and temperatures staying around normal in the mid to high teens.

It comes after scorching temperatures hit several regions nationwide during the week, including on the hottest day of the year on Wednesday.

The mercury reached 30.8C at Mount Dillon in Co Roscommon, while temperatures of 30C were also recorded at Newport in Co Mayo.

Northern Ireland also had its warmest day of 2021 on Wednesday when highs of 31.3C were recorded at Castlederg in Co Tyrone.