Hurricane Dorian makes landfall in the US

Hurricane Dorian has made landfall in the US state of North Carolina.

The storm hit the islands of Cape Hatteras with maximum sustained winds of around 90 mph earlier on Friday.

The strand of islands arch out into the Atlantic Ocean and then back toward the US mainland.

There were no immediate reports of major damage or deaths.

However life-threatening storm surges and dangerous winds are continuing along portions of the North Carolina and Virginia coasts.

We're getting some pictures and videos of the severe flooding due to storm surge on the Outer Banks. This is Ocracoke, NC. Our hearts go out to ALL impacted by #Dorian. #nws pic.twitter.com/OAVxjJkUjj

The storm is now forecast to move up towards Canada.

Strong winds will arrive on Saturday in Nova Scotia and Prince Edward Island.

There will also be dangerous conditions overnight on Saturday and Sunday in Newfoundland.

It comes after the number of people killed in the Bahamas from Hurricane Dorian has risen to at least 30.

Authorities there are expecting that number to rise.

Abaco Islands and Grand Bahama suffered direct hits from the powerful storm, with some areas said to be "decimated".

However, access to the impacted areas remains "very limited" due to the scale of the damage. 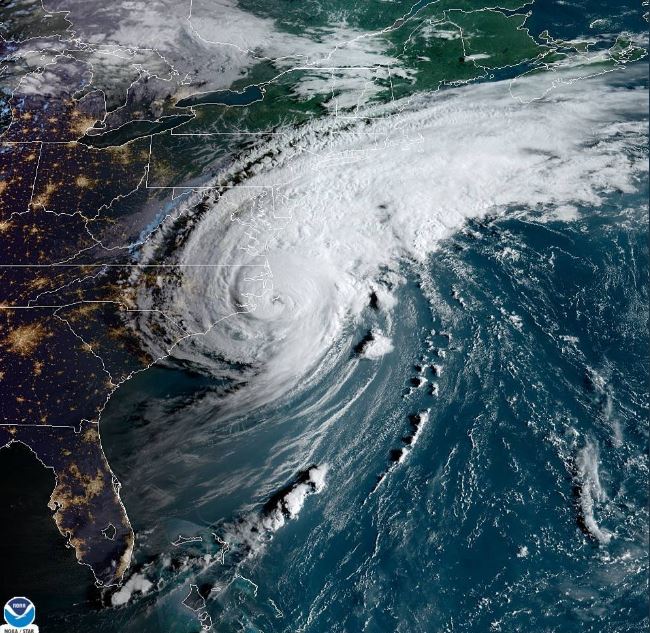 The centre of Hurricane Dorian is seen near Cape Hatteras, North Carolina | Image via @NHC_Atlantic on Twitter

The United Nations (UN) has said an estimated 70,000 people in the Bahamas are in need of urgent aid.

The UN's relief chief Mark Lowcock travelled to the Bahamas earlier this week.

He said there was "vast devastation" on the islands.

He explained: "It's very unusual, for 20% of the population of a country to be very severely impacted by a single event like this.

"The Bahamas has certainly never seen anything on the scale."

"If you imagine in other places what it would be for 20% of the population of the country to have their lives turned upside down and their homes devastated... just imagine something of that order and you get a sense of what the scale of the challenge facing the Bahamas is now."