The CEO of the HSE Paul Reid has said he is concerned about the increase in COVID-19 hospital adm...

The CEO of the HSE Paul Reid has said he is concerned about the increase in COVID-19 hospital admissions this weekend.

As of 8am this morning, 360 people are receiving treatment for coronavirus in hospital, compared to 328 yesterday.

There are 82 patients in ICU with the virus, a decrease of one person over the 24-hour period.

It comes amid an increase in the reproductive number of the virus and in the number of people being referred to GPs for tests.

The 14-day incidence rate per 100,000 of the population has also been stalled at around 150 for the past seven days.

Speaking to On The Record with Gavan Reilly, Paul Reid said the hospitalisation figures have been "stuck" in recent weeks.

"Overall, it has come down hugely well for us over the last few weeks from almost 2,000," he said.

"But we do need to remind ourselves, that number of 360 is actually the same number of the peak of the second wave that we had so we're at no way normal levels in our hospital.

"And certainly in the last week when we saw the numbers just stuck for the past few weeks, they had come down for the past five or six weeks very well.

"We've a lot more to go through with our hospitals before we're back at any normal levels.

Mr Reid said "everyone can sense the frustration and anger" in the last few days about the public health guidelines.

However, he added: "All we can do is tell the facts of where things are at the minute, and you would be concerned with what you see happening across Europe.

"From the HSE's perspective, we still see a very high positivity rate." 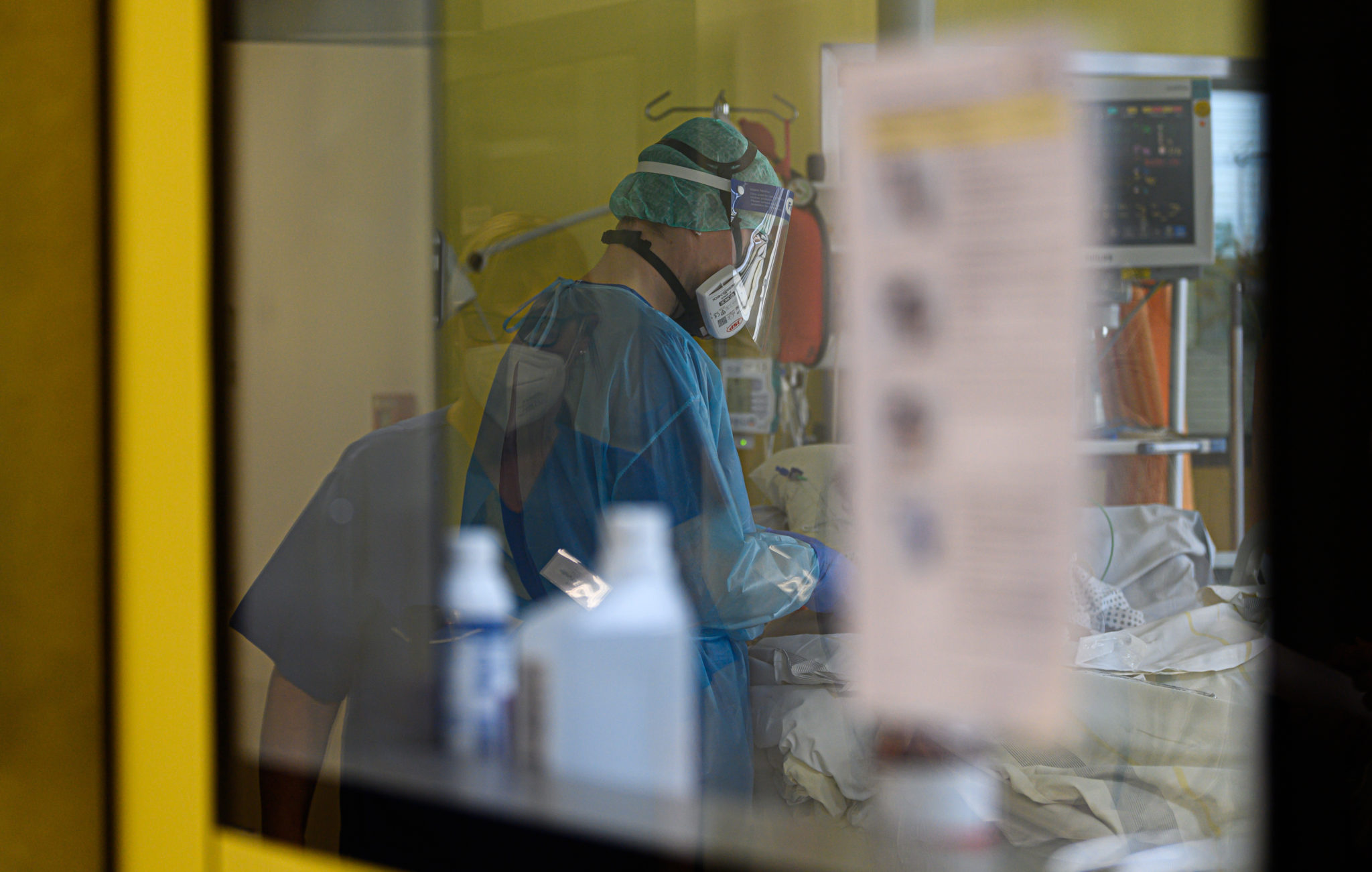 An intensive care nurse in a COVID ward at a hospital in Germany. Image: Robert Michael/DPA/PA Images

A person who is a close contact of someone who tests positive for COVID-19 has a 25% likelihood that they will have contracted the virus, he stated.

If that individual is within your household, the likelihood goes up to 33%.

"We know the transmission levels, particularly of this B117 variant, are still very strong and the positivity rate is still very high so it is important that everyone protects themselves, ups their guard, it's still transmitting at too high a level in the community," he added.

Mr Reid also responded to questions over the anger and frustration voiced by some members of the public this week with comments made by Dr Ronan Glynn.

The Deputy Chief Medical Officer asked on Thursday for people to “do a little bit more than you’ve been doing over the past week or two” to suppress the virus.

Dr Glynn then issued apologetic and clarifying remarks, with the initial public response described by one NPHET advisor as a "lightning rod of frustration".

As a fellow public health official, Mr Reid said that in his role, he "has to be open to criticism" and to listen to people's challenges on a variety of issues.

"That's part of my role, that's part of leading the HSE, and it might not always feel fair but that's the reality of the role," he said.

"My experience of meeting people is really positive, people are understandably concerned about recent transmission again.

"But really positive about seeing the light ahead and relaying that back to me and vaccination programmes, would like more, but positive."

The HSE CEO added that social media "can be a different world altogether".

"There is a high level of nastiness emerging, I think," he said.

"It is a great tool for relaying information but you can see how some young people really get impacted by some of the stuff that's publicly said on social media.

"But I expect it in my role, I'm open to challenge and I have to take it, and generally I experience really good engagement with people, but social media can be quite toxic."