Canadian wildlife photographer Lee-Anne Carver has been keeping tabs on Carrot the deer for sever...

Canadian wildlife photographer Lee-Anne Carver has been keeping tabs on Carrot the deer for several years.

But earlier in December, she found the animal with a crossbow through his head - though he was still alive.

She told Sean Moncrieff she has known the deer since he was a fawn, and he wonders through their small community.

"He just meanders through the residences and pays visits to people".

"My husband - who is 72 - was outside and Carrot's a good friend to him, and he came in the house crying that Carrot had the bow through his head". 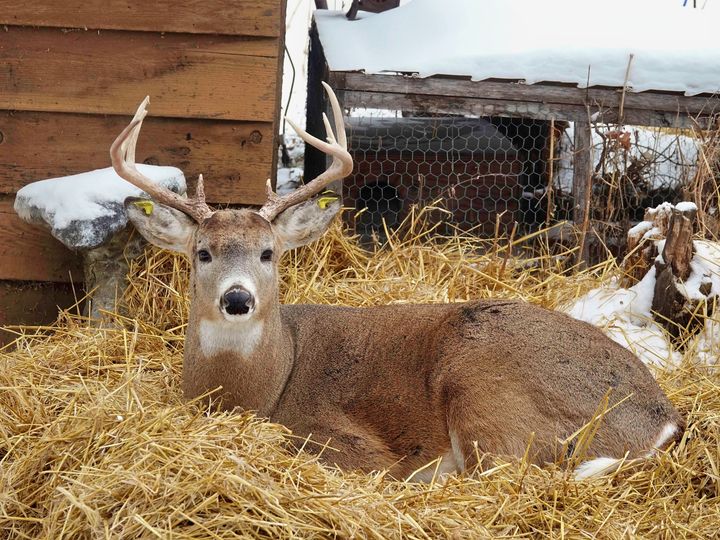 Picture by: Facebook/Carrot the Magic Deer and the Orange Heart Club

She says she went out to see and that it was "very disturbing".

"However his personality was completely unphased - he was eating well, he didn't seem to be troubled in that way at all - so I was confident he would be fine".

She says they thought taking the bow out could do more harm than good.

But the experts believed otherwise: "They completely took it out, it was completely removed."

"A deer has never, ever been tended to in Ontario before in this way - a deer's never been darted or helped - this is a first".

"They had a veterinarian on the phone guiding them from Ottawa, which is about a three-day drive from where we are".

'We thought we lost him'

"Everybody just dove in and did the best they could, and they were successful".

"For a while it was really, really iffy for Carrot - he was down for about six hours and we thought we lost him a few times."

"There was no operation... once they had him down, the arrow was just pulled out".

She said Carrot is now giving hope to people.

"I went looking for him everyday, monitoring him for infection and that was crucial".

"Also, I don't lean to lend a morbid note to this, but he had so many chemicals in him that had he perished he was also a threat to other animals who may have fed on him".

"People around the world have gathered around him, it's unbelievable, I couldn't have predicted that response.

"But obviously he really is a magic deer".

"People are checking on his Facebook page every day - and the common theme is that he's giving people hope around the world".

"It seems that Carrot's become a beacon of hope".