US President Donald Trump is in Ireland for a short visit between Wednesday and Friday. He and hi...

US President Donald Trump is in Ireland for a short visit between Wednesday and Friday.

He and his wife Melania arrive in Shannon Airport and will be staying at the Trump International Golf Links and Hotel.

While the first couple are here, a major security operation is underway - involving almost every arm of the State.

Some 1,500 uniform Gardaí are being deployed every 24 hour period from the Western, Southern, South Eastern and the Dublin regions.

These will be supported by approximately 500 members attached to specialist units.

All this translates to approximately 8,500 meals each day for members of the force, and 40,000 bottles of water.

As well as the human element, some 3 kms of barriers and another 3 kms Harris Fencing - around 6ft high - are being erected in the area.

A temporary Strategic Control Room is also being installed at Shannon Garda station - as well as a backup facility at Ennis Garda station, and video feed to Garda Headquarters.

Permanent upgrading of telecommunications and tetra radios infrastructure in the Clare division has also taken place.

An Garda Síochána have said traffic restrictions for the visit will be kept to the minimum required and should "not impact greatly" on normal traffic in Shannon and Doonbeg.

While normal operations will continue at Shannon Airport, additional security checks and a Garda presence are ongoing.

No on-street parking is allowed anywhere within Shannon Airport, except in designated areas.

Passengers travelling to the airport are advised to allow extra travel time, as additional security measures will be in place.

All visitors to the airport during the period are advised to have photo ID, and intending passengers should have valid flight documentation available.

Gardaí have said they are engaging with a number of protest groups who wish to attend over the duration of the visit.

"Protests will be facilitated and every effort will be made to minimise disruption to the local community and patrons of Shannon Airport", they said.

It is anticipated that some protest activity will take place at the entrance to the Shannon Airport and An Garda Síochána will advise members of the public when further information is available. 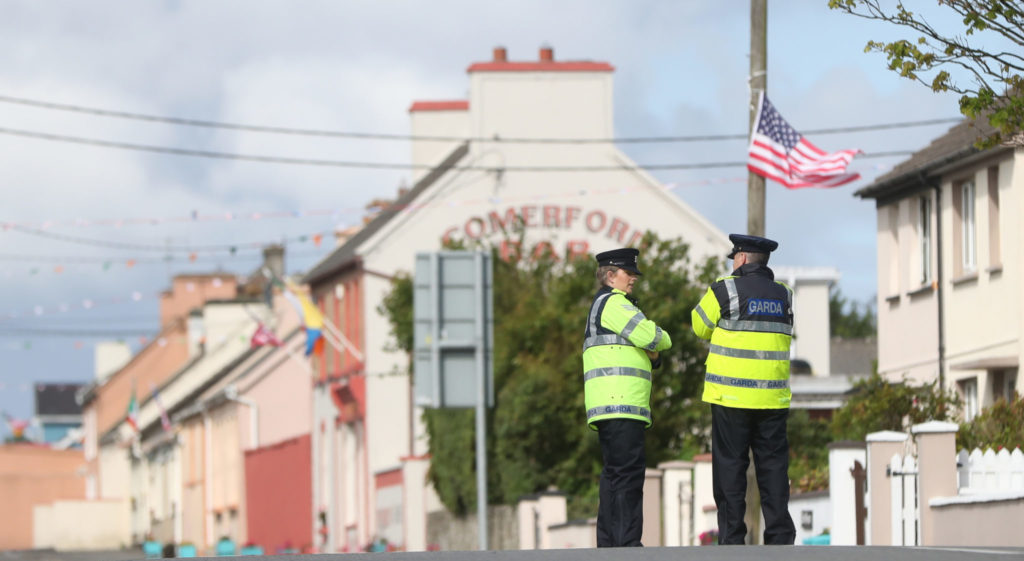 Gardaí in the village of Doonbeg in Co Clare as a huge security operation swings into operation ahead of the arrival of US President Donald Trump | Image: Niall Carson/PA Wire/PA Images

Access to Doonbeg village itself is not restricted and it remains open for business as normal.

Trump International Golf Links and Hotel has been closed to the public from Tuesday June 4th.

There will also be restricted access for traffic along the N67, between Clonadrum Cross (north) and Doonbeg (south) from Monday evening.

Southbound traffic is diverted along the R483 to Creagh and Cooraclare and into Kilrush.

Northbound traffic from Kilrush is diverted on the R483 to Cooraclare, Creagh, Quilty and Miltown Malbay.

Gardaí will be patrolling these diversion routes and have said free flow of traffic will be maintained.

Access for local residents inside the N67 diversion route will also be maintained.

Local residents have been issued with passes, and are also advised to carry photo identification and proof of address.

There will also be temporary rolling road closures across June 5th to 7th on the following routes: M18, N18, N19, N85, N68, N67 also through Ennis and the environs of Limerick city.