Tusk: EU will listen to 'realistic' Brexit ideas that are acceptable to Ireland

European Council President Donald Tusk has said any Brexit proposals from Britain must be accept...

Tusk: EU will listen to 'realistic' Brexit ideas that are acceptable to Ireland

European Council President Donald Tusk has said any Brexit proposals from Britain must be acceptable to all EU member states, including Ireland.

He was speaking as he arrived at a G7 summit in France, which he said would be a "difficult test of unity and solidarity".

Leaders of some of the world's most industrialised nations will discuss several issues at the three-day event in Biarritz.

Climate change, inequality and security are likely to dominate the summit, which is attended by the leaders of Canada, France, Germany, Italy, Japan, the UK and US.

The EU is represented at the gathering by Mr Tusk.

Speaking to reporters, he said: "This is another G7 summit which will be a difficult test of unity and solidarity of the free world and its leaders.

"There is still no certainty whether the group will be able to find common solutions, and the global challenges are today really serious, or whether it will focus on senseless disputes among each other.

"The last years have shown that it is increasingly difficult for all of us to find common language when the world needs our cooperation more, not less.

"This may be the last moment to restore our political community." 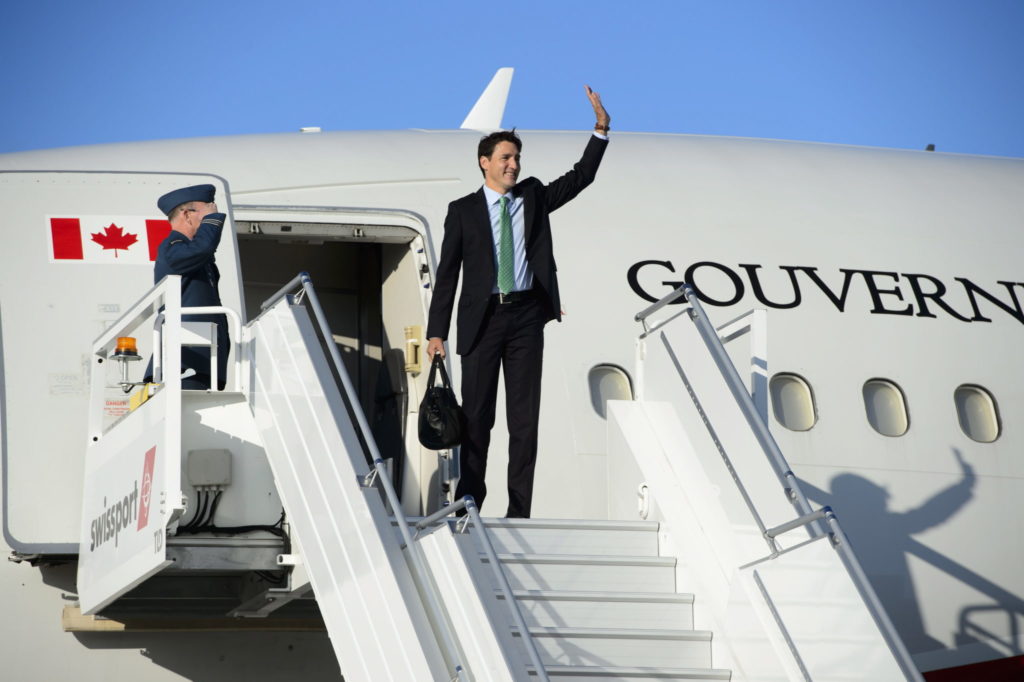 It will also be the first G7 appearance for Boris Johnson as British prime minister.

Mr Tusk will hold meetings with Mr Johnson on Sunday to discuss Brexit.

On this, Mr Tusk said: "He will be the third, British Conservative prime minister, with whom I will discuss Brexit.

"The EU was always open to cooperation, when David Cameron wanted to avoid Brexit, when Theresa May wanted to avoid a no-deal Brexit, and we will also be ready now to hold serious talks with PM Johnson.

"The one thing I will not cooperate on is no deal. And I still hope that PM Johnson will not like to go down in history as 'Mr No Deal'.

"We are willing to listen to ideas that are operational, realistic, and acceptable to all member states including Ireland, if and when the UK government is ready to put them on the table." 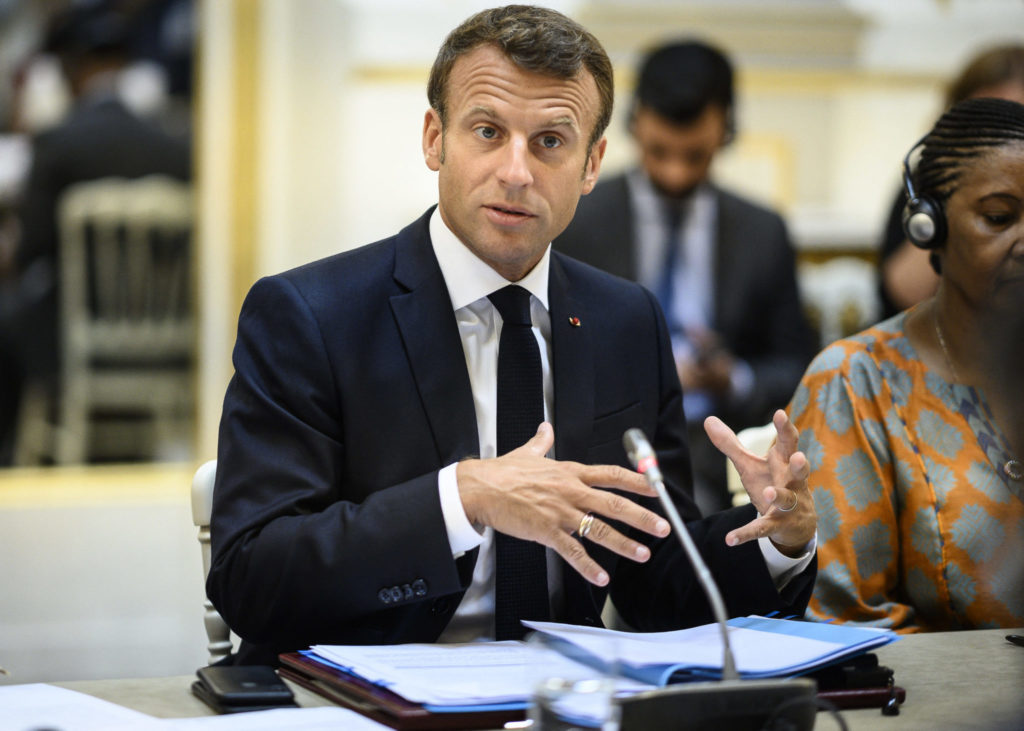 French President and G7 host Emmanuel Macron during a meeting with members of the G7 Advisory Board for Gender Equality at the Elysee Palace in Paris | Image: Blondet Eliot/ABACA/ABACA/PA Images

The summit is taking place under the French presidency of the G7, which is centred around the fight against inequalities.

G7 leaders are to focus on relations with Iran following the country's decision to reduce the implementation of certain aspects of the nuclear deal.

They will also discuss the global economic outlook and issues related to trade, as well as international taxation - especially in the digital sector.

Leaders will also look at how to safeguard the rules-based trading system - while the summit is seen as an opportunity to discuss ways to de-escalate current trade tensions. 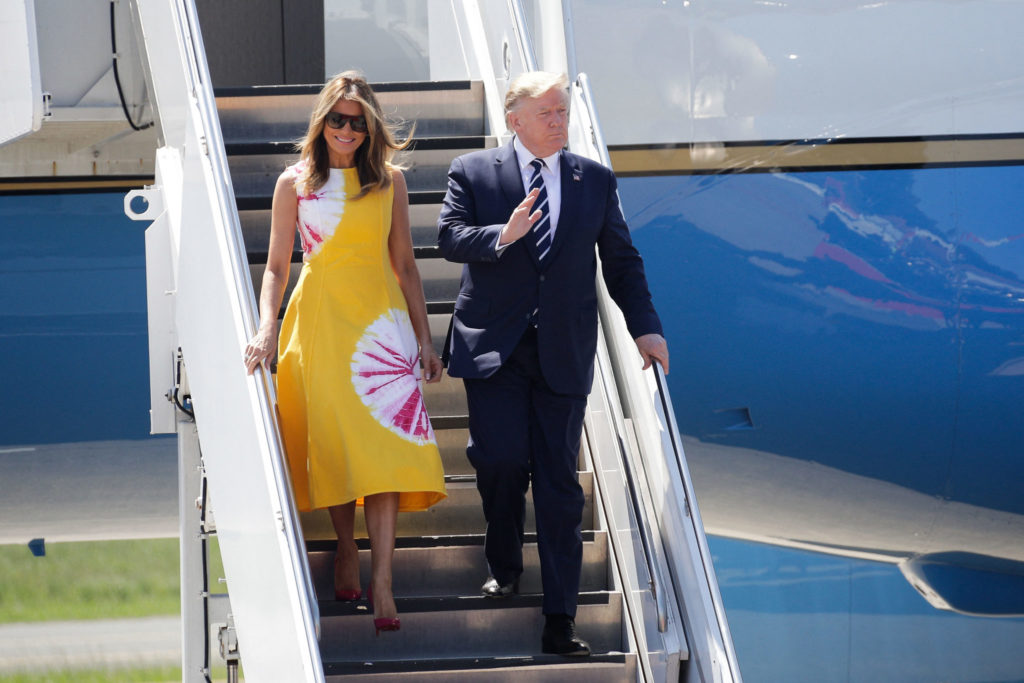 US President Donald Trump and his wife Melania arrive in Biarritz, France for the G7 summit | Image: Moritz Thibaud/ABACA/ABACA/PA Images

The reform of the World Trade Organisation (WTO) is also on the agenda, following the commitment made at the G20 summit in Osaka to modernise the body.

G7 leaders are expected to endorse a new framework between the G7 and Africa, seeking to co-develop concrete tools to support sustainable economic development across the continent.

The EU will also announce financial support to the African Development Bank's 'Affirmative Finance Action for Women in Africa' (AFAWA).

The summit host, French President Emmanuel Macron, has already sought to put the environment on the agenda, calling for leaders to discuss how to tackle fires in the Amazon rainforest.

But that is one of a number of topics that could cause arguments between Mr Trump and other world leaders. 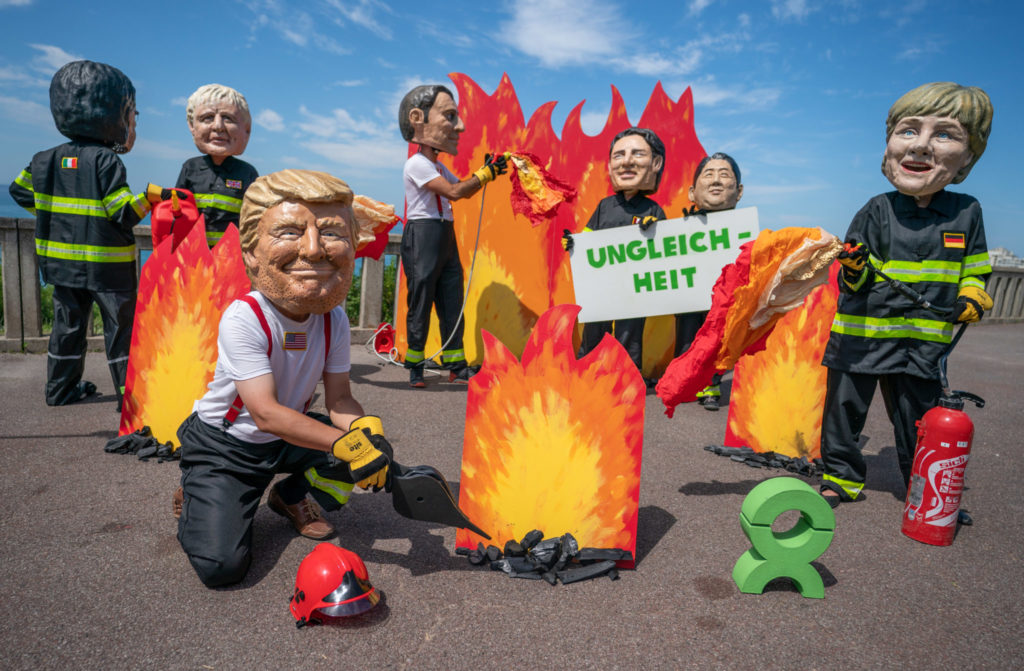 Oxfam activists are dressed in firefighters' uniforms and masks of heads of state and government at the 2019 G7 summit during a protest to point out world-wide inequality | Image: Michael Kappeler/DPA/PA Images

Security and economic issues, such as how to handle Iran and Russia as well as the ongoing trade war between China and the US, may also prove to be flashpoints.

Protesters have arrived in the south of France and have set up a 'counter-summit' to discuss the environment and capitalism.

Speaking in Biarritz, Cecile Duflot, director general of Oxfam France, said "inequalities and climate change are two fires on the planet" adding they are "big threats for us all".

Campaigners are being kept away from the world leaders by more than 13,000 police officers, alongside soldiers and drones.