A delegation from the European Parliament's Directorate-General for Translation is to visit Irela...

A delegation from the European Parliament's Directorate-General for Translation is to visit Ireland this week.

The visit - on Tuesday and Wednesday - will focus on the Irish language, as well as briefing educators on the parliament's future job prospects.

They will also update key stakeholders - such as the Department of Culture, Heritage and the Gaeltacht and representatives from the School of Languages and an tAcadamh in NUI Galway - on the European Parliament's priorities.

Director-General Valter Mavric will be among those in the group.

Ahead of the visit, he said: "The European Union's motto is 'United in Diversity'. This resonates particularly strongly with our translators who work through all 24 official EU languages, including Irish to which we are strongly committed.

"We are therefore particularly looking forward to briefing educators on the future needs of the European Parliament in the hope of enabling more Irish speakers to pursue careers as translators in the European institutions".

The European Parliament has also announced an expanded role for translators, as reflected in the new job title 'Intercultural and Linguistic Professional'.

Mr Mavric added: "The new job title of intercultural and language professional reflects the true nature of the role, which extends beyond merely translating words but also includes communicating parliament's role in citizens' lives by giving cultural and local context". 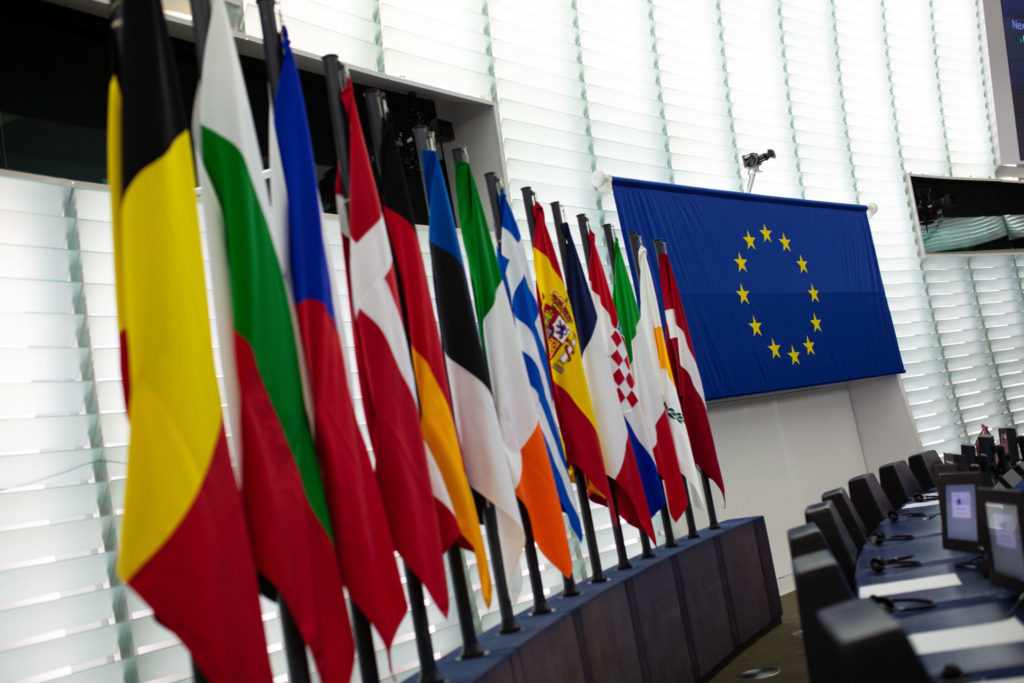 A European flag hangs on the wall in the plenary hall of the European Parliament in Strasburg, France | Image: Philipp von Ditfurth/DPA/PA Images

On Wednesday, officials will meet with the Higher Education Authority (HEA) and Gaelchultúr in Dublin.

The aim of the visit is to highlight the parliament's commitment to the Irish language and to promote careers for linguists.

They will discuss building the parliament's Irish-language translation capacity, both in-house and freelance.

They will also provide an update also on new IT tools used by translators.

And the group will highlight new changes to the format of recruitment competitions for EU translators, and the skills needed.

English has been an official language of the bloc since 1973, and will retain this status even after Britain leaves the European Union.

In their proposed budget for 2021-27, the European Commission said: "The withdrawal of the United Kingdom will result in a limited reorientation of some functions within the administration but the scope of activities will not change - and in some new priority areas will be intensified.

"Translation and interpretation services in the English language will also remain unaffected."

Once Britain leaves, English will be an official language in just two member states: Ireland and Malta.