The cost of missing our greenhouse gas emissions target for 2020 could be up to €150 million.

The State will have to buy 'carbon credits' for around 16 to 17 million tonnes of carbon emissions.

A carbon credit refers to a permit that allows a country to produce a certain amount of carbon dioxide and greenhouse gases.

Environment and Climate Action Minister Richard Bruton says the cost could escalate if we don't act.

Speaking in Dublin today, he explained how much Ireland will have to pay for missing our 2020 targets.

He said: "You can do the sums yourself - it's probably somewhere between €100-150 million, that sort of order of magnitude.

"Those penalties will escalate dramatically in the years ahead if we continue to fail.

"So my determination is that we get back on track, that we hit our targets for 2030, and that we do it having delivered the carbon abatement."

Last year, the Climate Change Advisory Council warned that Ireland is "completely off course in terms of achieving its 2020 and 2030 emissions reduction targets".

It said greenhouse gas emissions are rising rather than falling, and that urgent action is needed. 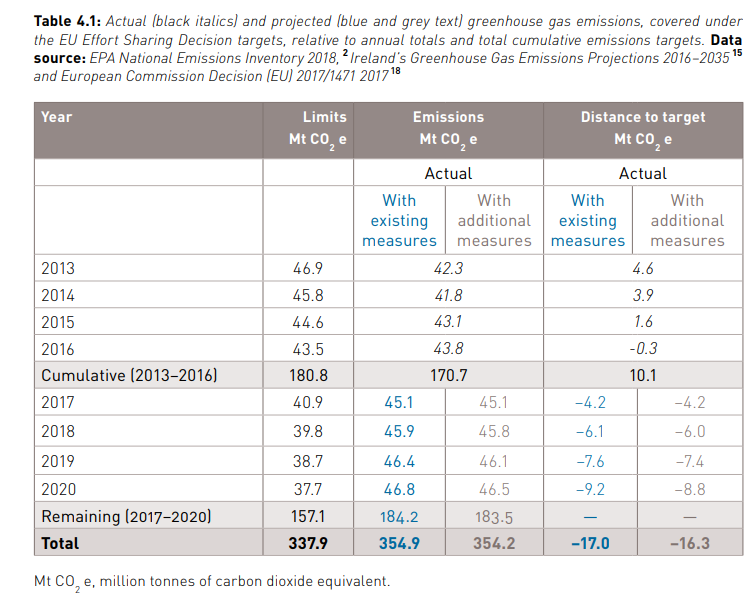 Campaigners have accused the Government of inaction on environmental issues.

Minister Bruton has repeatedly insisted that work is underway on "all of government" plan to "make Ireland a leader in responding to climate change".

UN Secretary-General António Guterres warned that the world is "not on track" to achieve objectives set out in the Paris Agreement.

The UN wants increases capped at 1.5°C above pre-industrial levels, which it said is necessary to prevent "irreversible changes".