The sons of US President Donald Trump have made the most of their time in Co Clare - by going on ...

The sons of US President Donald Trump have made the most of their time in Co Clare - by going on a pub crawl.

As their father held a bilateral meeting with the Taoiseach Leo Varadkar in Shannon on Wednesday evening, Eric Trump and Donald Junior paid a visit to all the pubs in Doonbeg.

The town is also where President Trump and his wife Melania are staying during their visit: the Trump International Golf Links and Hotel.

The Trump sons drew large crowds as they toured venues - even trying their hand at serving pints behind one bar.

Eric Trump bought pints for everyone, while Donald Jr shook hands and posed for selfies. 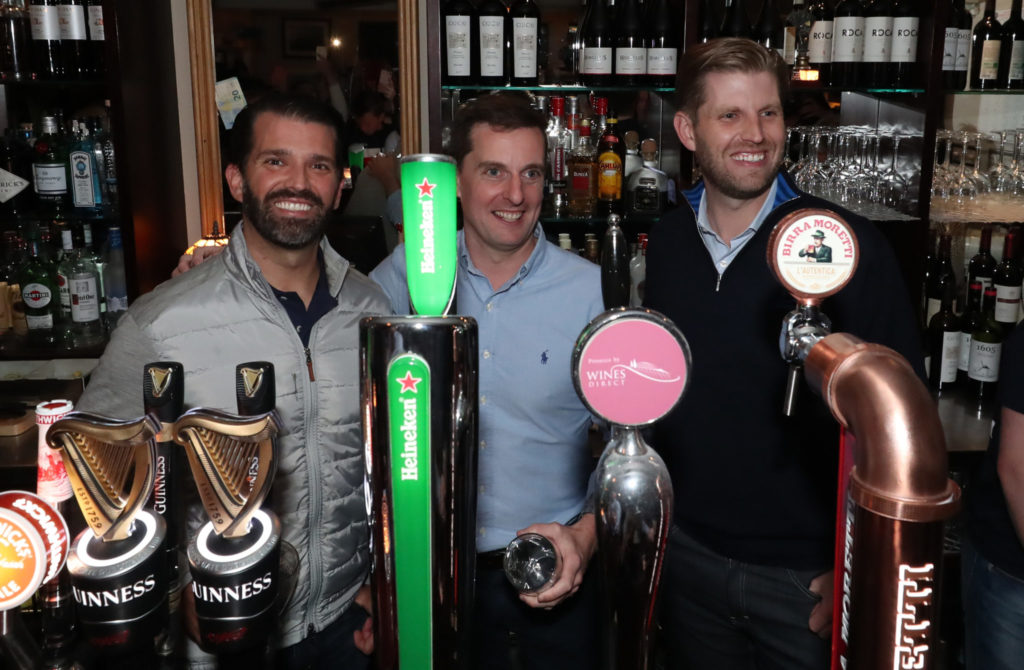 At Comerfords, Eric told the crowd: "At every bar that we've gone to we've bought everybody drinks - so we're buying you guys all drinks".

"Drink up and have a great time". 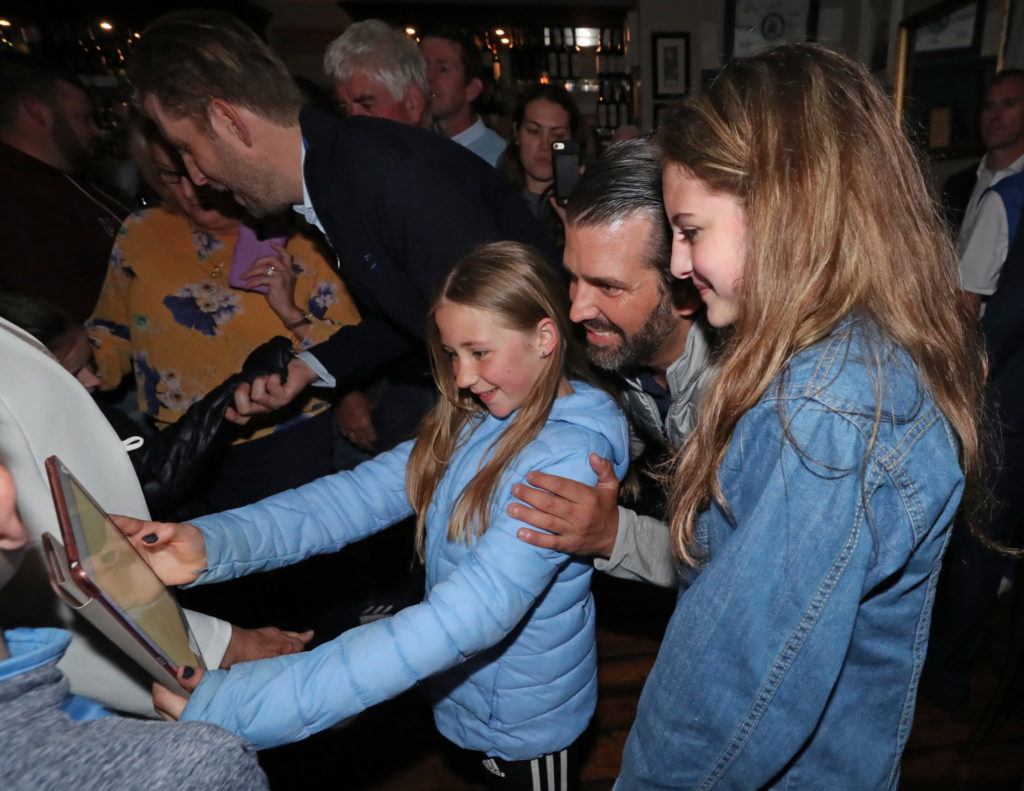 Donald Jnr added: "Thank you so much for everything guys - the support around town from day one has been incredible.

"But it's only growing stronger, so we really want to thank you for that.

"Every time we're here we get such a warm welcome, it's truly amazing and you guys have been the best - it's really touching to us".

The crowds seemed appreciative, with one woman saying: "They're lovely gentlemen - it's great to have them."

Another said: "They're very humble, so we weren't expecting that... and they have a tab on, so we all have free drink - so thankful for that!" 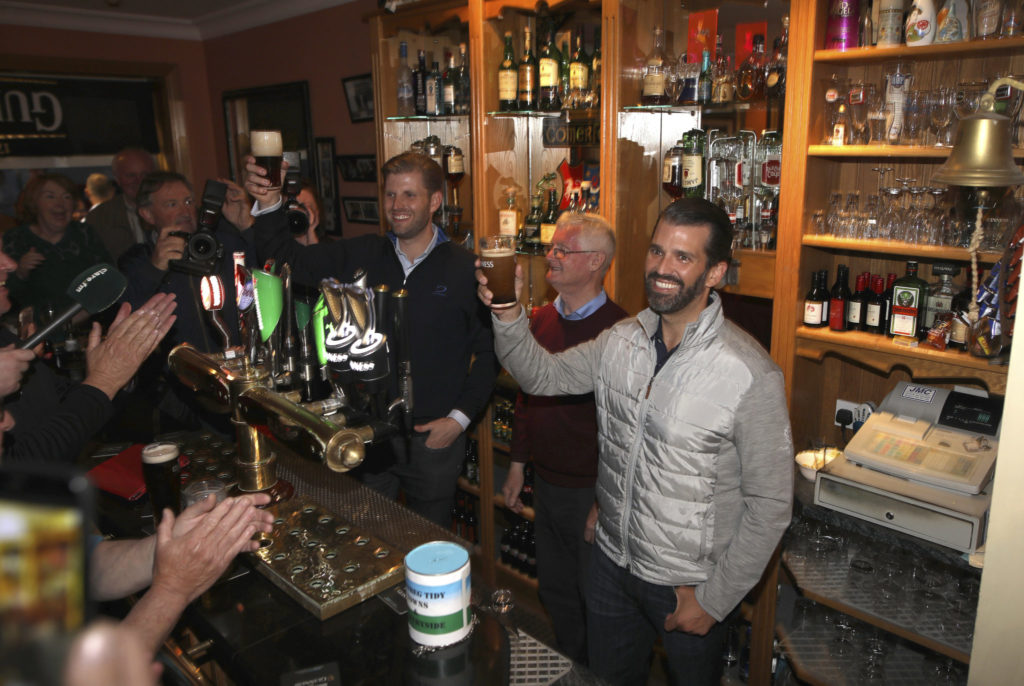 In Tubridy's bar, owner Tommy Tubridy praised the Trump family for their investment in the golf course and hotel.

"On behalf of the people of Doonbeg and the county of Clare, a big Cead Míle Fáilte to the Trump family", he declared.

Eric replied: "We came off Air Force One earlier and everywhere we looked between Shannon and here is all American flags with Irish flags. 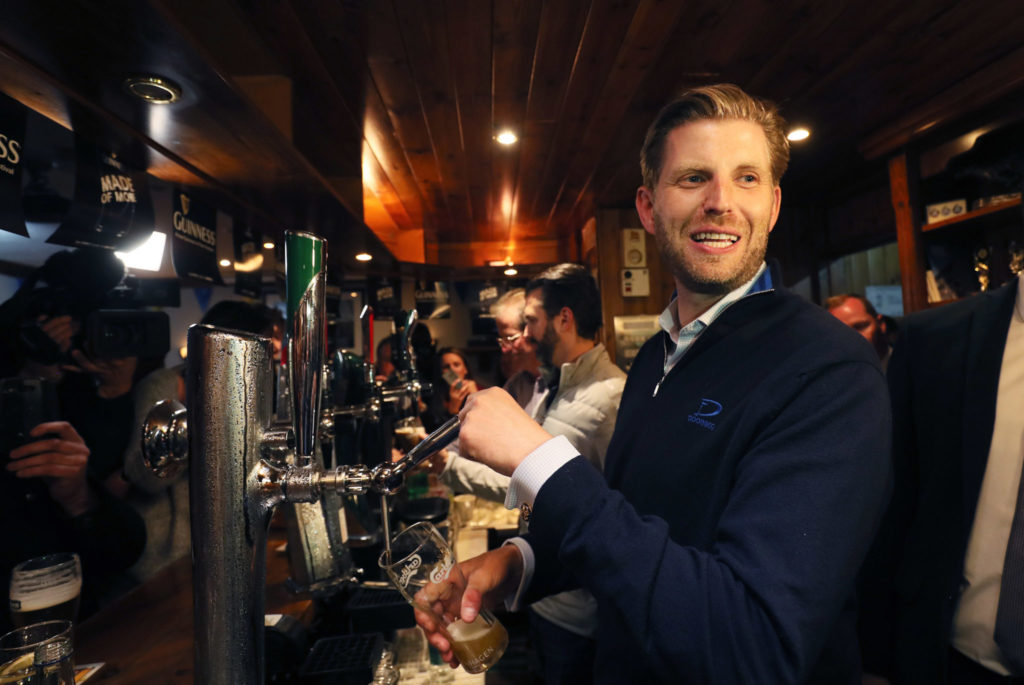 Eric Trump, son of US President Donald Trump, behind the bar in Madigan's pub in the village of Doonbeg, Co Clare | Image: Brian Lawless/PA Wire/PA Images

Another man asked the Trump brothers to think of the Irish immigrants in America.

He asked Eric: "Just on that note - our immigrants in America, maybe you'll think of them in your heart", he said.

"They're just what you see around here, and they're in America - just to think of our immigrants".

Tommy Tubridy heralds the Trumps while another man pleads with the brothers to think of all the Irish emigrants in America. #Trump #TrumpInIreland #Doonbeg #emigration pic.twitter.com/uFvq8yIS8G