An extended interview with Paschal Donohoe as part of the Breakfast Business Summer Series.

People often forget the “absolutely profound uncertainty” facing the Government at the start of the pandemic, the Finance Minister has told Breakfast Business.

In an extended interview as part of the programme’s Summer Series, Paschal Donohoe said the onset of the Pandemic was a much bigger challenge than the current cost-of-living crisis.

Minister Donohoe also told Joe Lynam and Gavin McLoughlin that, while there is a risk of recession in the coming months, he does not expect to see it happen.

He also insisted he has no interest in ever becoming Taoiseach.

Asked whether he found it harder to respond to the Pandemic or the inflation crisis we’re currently facing, he chose the Pandemic “by some way”.

“If I look at the challenges we’re confronting now, our history and modern economic history does provide some guides regarding how these scenarios can unfold and what the appropriate policy response is.

“With the pandemic, there was little history that was of help in guiding an economic response.

On Breakfast Business this morning: @JoeBLynam and @gavmcloughlin caught up with @Paschald to discuss a range of subjects, including whether he would like to become Taoiseach and new corporation tax rules and they began by asking whether SMEs receive enough support...

“The last time we had a pandemic that shaped the world was the Spanish Flu in 1913/1914 and even though that was a globalised economy, it was profoundly different kind of globalisation to the one we have now, with economies that were in a very different shape and level of modernisation than we have now.

“So, by some way, the pandemic posed the greater shock and while our inflationary challenges, of course, are also severe and pose a challenge to many, the pandemic not only posed a gigantic economic challenge and a profound one, it was killing people.

“So, for all those reasons, the pandemic was the moment of test.”

He said the Department of Finance had to react quickly in those early weeks of the Pandemic.

“We had a number of different reactions that were playing out simultaneously,” he said. “The first one was that we were in an atmosphere of absolutely profound uncertainty.

“I think, with the passing of time and the return of health to many, we can occasionally - and I think, by and large, this is a positive thing - can retrofit into periods of great uncertainty, feelings of certainty that weren’t there at the time.

“The reality is, across that period from March up to July and August, we were in an atmosphere of profound challenge with the real risk that we were facing an Irish, European and global disruption to which the only comparison would have been the Great Crash that took place after World War One. 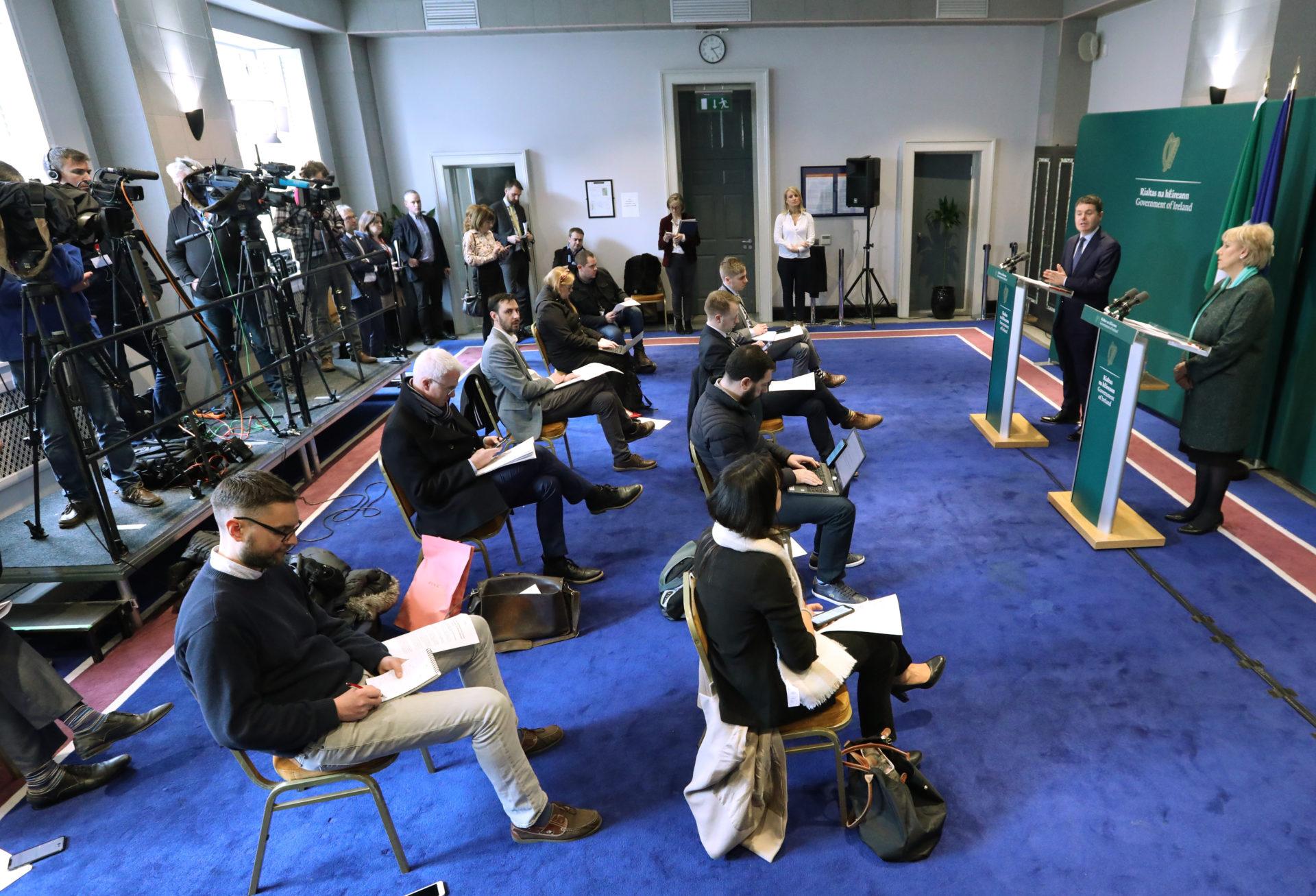 3/03/2020 COVID-19 press conference. Members of the press are seated 1.5 metres away from one another for safety reasons, as Minister for Finance and Public Expenditure and Reform, Paschal Donohoe TD, and Minister for Business, Enterprise and Innovation, Heather Humphreys TD hold a press conference today in relation to COVID-19 in the Department of the Taoiseach, Government Buildings. Video: RollingNews.ie

“The return of violence and wars is something that has been associated with pandemics – I didn’t feel that was likely then, but I did feel we were facing into a complete global economic disruption.

“There was that feeling there but also running alongside that was also the sense that this is the time in which having healthy public finances and a credit-worthy State, this is the moment in which these things have to count

“So, what we were trying to do really quickly was figure out how we would respond back and how we could critically do it really quickly.”

He said the country is likely to see “significantly lower levels of growth” rather than recession over the coming months but warned that recession is still a risk.

“Is it a risk that is materialising at the moment?” he asked. “No.”

“Is it a risk that we believe will happen next year with the risk that are currently occurring within our economy? No.”

“But could things happen elsewhere in the global economy later on this year that could trigger these risks? The answer is yes, and I have been saying that now for some months.”