Donald Trump calls off Iran strikes with 'minutes' to spare

US President Donald Trump has said the US was "cocked and loaded" to retaliate after Iran shot do...

Donald Trump calls off Iran strikes with 'minutes' to spare

US President Donald Trump has said the US was "cocked and loaded" to retaliate after Iran shot down one of its drones - but called off the strike because too many people would die.

He had signed off on three separate targets, but cancelled the operation after military advisers warned up to 150 people could die.

He tweeted: "10 minutes before the strike I stopped it, not proportionate to shooting down an unmanned drone.

"I am in no hurry, our Military is rebuilt, new, and ready to go, by far the best in the world.

Mr Trump had been asked on Thursday what his response to Iran might be and he said: "You'll soon find out."

The words came after he had spent most of the day discussing Iran with national security advisers, having earlier said that Iran had made a "very big mistake".

Iranian state television on Friday showed what it said were retrieved sections of a US military drone shot down on Thursday.

Amirali Hajizadeh, head of the Revolutionary Guards aerospace division, told a reporter the wreckage was proof the drone had been over Iranian territorial waters when it was shot down by his forces.

It comes as Democrats in the US have raised concerns that the Trump administration could 'bumble' into a war with Iran.

Republicans and Democrats met at the White House on Thursday.

The US Federal Aviation Administration (FAA) issued an emergency order on Thursday banning US operators from flying over part of airspace over the Strait of Hormuz and Gulf of Oman. 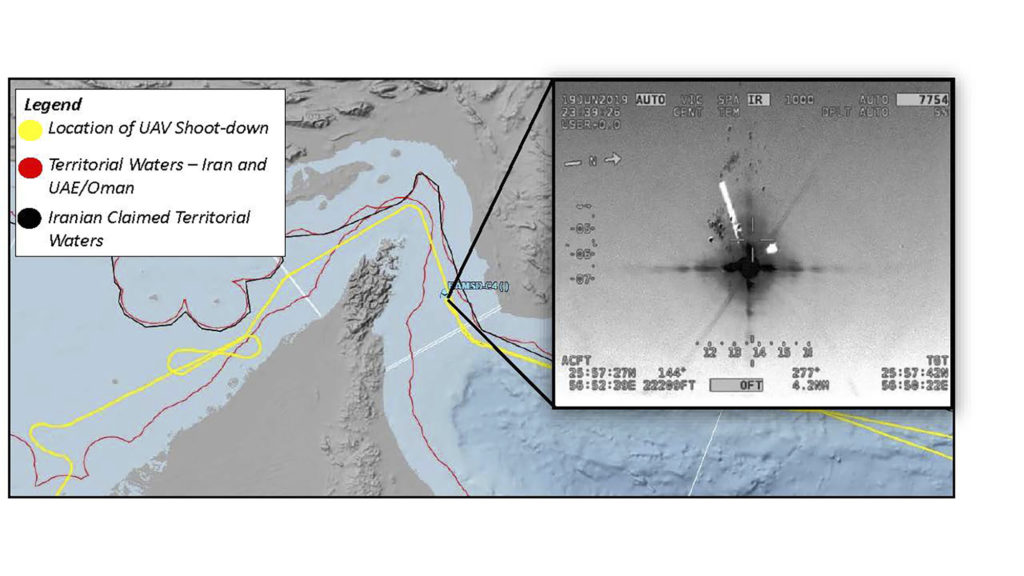 This image released by the US military's Central Command shows what it describes as the flight path and the site where Iran shot down a US Navy RQ-4A Global Hawk in the Strait of Hormuz | Image: AP/Press Association Images

It said that the nearest civil aircraft had been around 45 nautical miles from the Global Hawk drone when it was shot down and it was concerned about escalating tensions in the area.

It added: "There were numerous civil aviation aircraft operating in the area at the time of the intercept."

A  spokesman for US airline United said customers flying from Mumbai to Newark would be booked on alternative flights back to the US, while American Airlines and Delta Air Lines said they do not fly over Iran.

The FAA's order does not affect non-US carriers - but several international companies said they were re-routing flights away from the Strait of Hormuz.