The Taoiseach Leo Varadkar has corrected the US President over his reference to a “wall” and ...

The Taoiseach Leo Varadkar has corrected the US President over his reference to a “wall” and a “border” in Ireland.

Speaking after he arrived at Shannon Airport this afternoon, Donald Trump insisted Ireland is “going to be in great shape” regardless of what happens with Brexit.

“I just left some very good people that are very much involved in Brexit as you know and I think that will all work out very well and also for you with your wall; your border,” he said.

The Taoiseach Leo Varadkar then had to jump in to point out: “The main thing we want to avoid of course is a border or wall between both sides.”

President Trump then agreed that “the way it works now is good.”

“We want to try and keep it that way and I know that is big point of contention with respect to Brexit, is your border, and I am sure it is going to work out well.

“There are a lot of good minds thinking about how to do and it is going to be just fine.

“I think ultimately it could even be very, very good for Ireland – but the border will work out.” 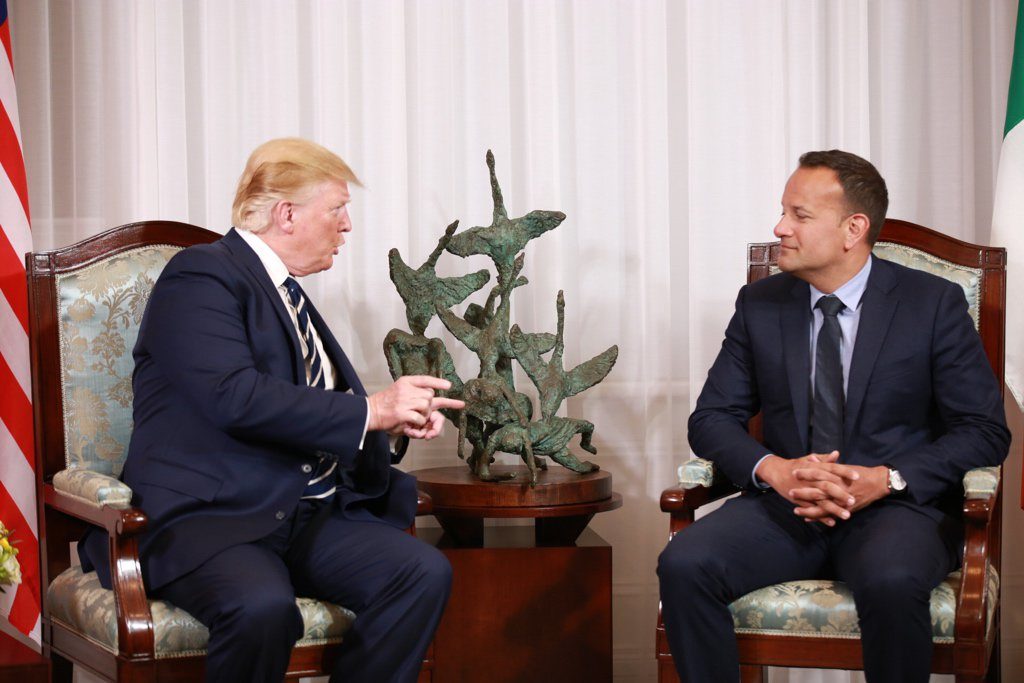 He said the “decision number one” with regards to the process will be the appointment of a successor to Theresa May as UK Prime Minister.

“Once that happens that person will get in and try and make a deal,” he said.

“Maybe if they don’t make a deal, they can do it a different way – but I know one thing; Ireland is going to be in great shape.”

He met with the Taoiseach at the airport before moving on to spend the night at his hotel in Doonbeg.

Mr Varadkar was expected to bring up Brexit, Northern Ireland and trade during the talks - along with access to the E3 visa for Irish citizens.

He was also under pressure to discuss climate change after the President Michael D Higgins slammed his US counterpart’s climate stance as “regressive and pernicious.”

The US President brought a huge entourage with him for his trip to the West with the Irish Government ordering a major security operation – involving almost every arm of the State.

Some 1,500 uniform Gardaí are being deployed from the Western, Southern, South Eastern and the Dublin regions.

These will be supported by approximately 500 members attached to specialist units.

Marine One being prepped to take Trump from Shannon to Doonbeg pic.twitter.com/hq9GrrXQCe

Protests are taking place around the country throughout the two-day visit - with demonstrators voicing opposition to his policies on climate change and a range of other other issues.

Ed Horgan, from the Shannonwatch anti-war group, is among those demonstrating at Shannon airport.

“The whole idea is to give a message to Donald Trump that he is not welcome and to Leo Varadkar that he shouldn’t have invited him in the first place,” he said.

“In particular, he shouldn’t be meeting him at Shannon Airport where Irish neutrality is being abused on a daily basis by the US military.”

However locals in Doonbeg insist he is welcome to the area. Tommy Tubridy runs a bar and restaurant in the village:

“I back him to the hilt to be honest with you and that is it,” he said.

“And of course I am very proud that the president of the United States is coming to our village and our parish.”

The Trump baby blimp to fly over Dublin tomorrow as protests get underway in the capital.

The Dublin protest, organised by the Stop Trump Ireland Coalition, will begin at the Garden of Remembrance and will be attended by Junior Minister Finian McGrath.

Modest crowd so far for the anti #Trump protest at Shannon Airport. It’s been organized by Shannonwatch, Extinction Rebellion and Futureproof Clare. #TrumpInIreland. More on @IvanYatesNT after 5 pic.twitter.com/Dpr5PtGqgb

Other protests are also planned for Galway, Cork and Sligo - and will be attended by a number of civil society groups and political parties.

With reporting from Sean Defoe in Shannon ...