There have been 1,837 new confirmed cases of COVID-19 in Ireland. Latest available figures show t...

There have been 1,837 new confirmed cases of COVID-19 in Ireland.

Latest available figures show there are 208 patients hospitalised with the virus - 31 of these are in ICU.

The Department of Health says daily case numbers may change due to a future data update.

The five-day moving average has continued to rise, now standing at 1,650. 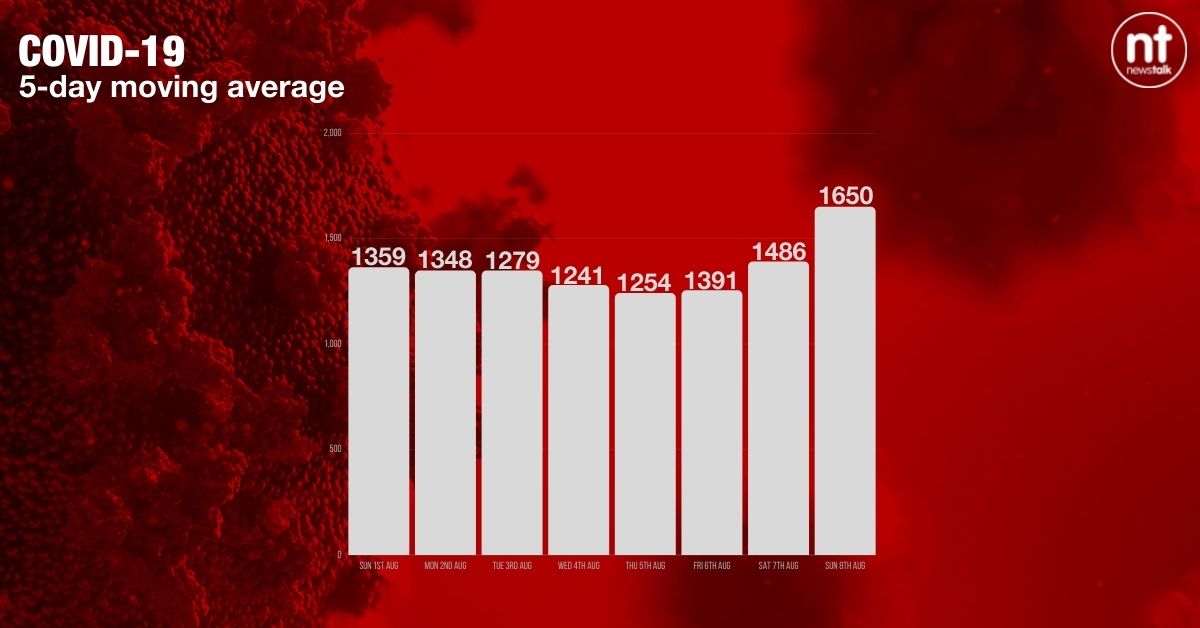 It comes as some 5,000 people have received vaccines at walk-in clinics this weekend.

The head of the HSE, Paul Reid, says this means over 89% of adults are now partially vaccinated and more than 77% are fully vaccinated.

Our walk in vaccination centres continue today. So far this weekend another 5,000 people have availed of them to receive their first vaccination. Now over 89% of adults are partially vaccinated and over 77% fully. We're getting there. @HSELive

Mr Reid has previously said he expects Ireland's adult population to be fully vaccinated by the end of this month.

He told Newstalk on Friday: "Certainly during August we expect that the vast majority of the Irish adult population who come forward for a vaccine will have received it.

"We'll be certainly by the end of August/early September have completed the adult population.

"And probably about four weeks ahead of where we thought we would be".

On the portal for 12 to 15-year-olds, which opens on Thursday, he says vaccines should start early the following week.

Meanwhile there are concerns that without vaccinating developing countries, we are 'no way near' getting out of this pandemic.

That's according to pharmacist Laura Dowling, who says getting developing nations vaccinated makes sense for us all.

She earlier told Alive and Kicking: "I think that it's great that we have such a buy-in to the vaccines... we have 57.37 of people in Ireland have had one or more vaccines - which is brilliant.

"But Nigeria have only had .68% of vaccines - now that is just crazy that we are slapping ourselves on the back and wanting to go back out socialising.

"We've all had a very tough year and I get that, and it has been so tough; but unless our other humans in the developing world are vaccinated, we're no way near getting out of this.

"If the virus is allowed to spread throughout our developing countries, because they're not vaccinated, then we're just going to be in a constant cycle of lockdowns, of fear, of variants, of mutations.

"And there's going to be no point in it all - we actually do have to look after our developing countries".