Dublin seems to want to create a sustainable city before 2035, which is just not possible.

That's according to Brian Caulfield, associate professor at the School of Engineering at Trinity College Dublin.

He was speaking after delays to plans to pedestrianise part of College Green in the city centre.

Work is not expected to begin on a plaza at College Green until 2024, almost a decade after it was first proposed.

An attempt in 2018 to introduce the traffic-free zone in front of Trinity College was rejected by An Bord Pleanála.

This was over concerns about the impact it would have on buses and traffic. 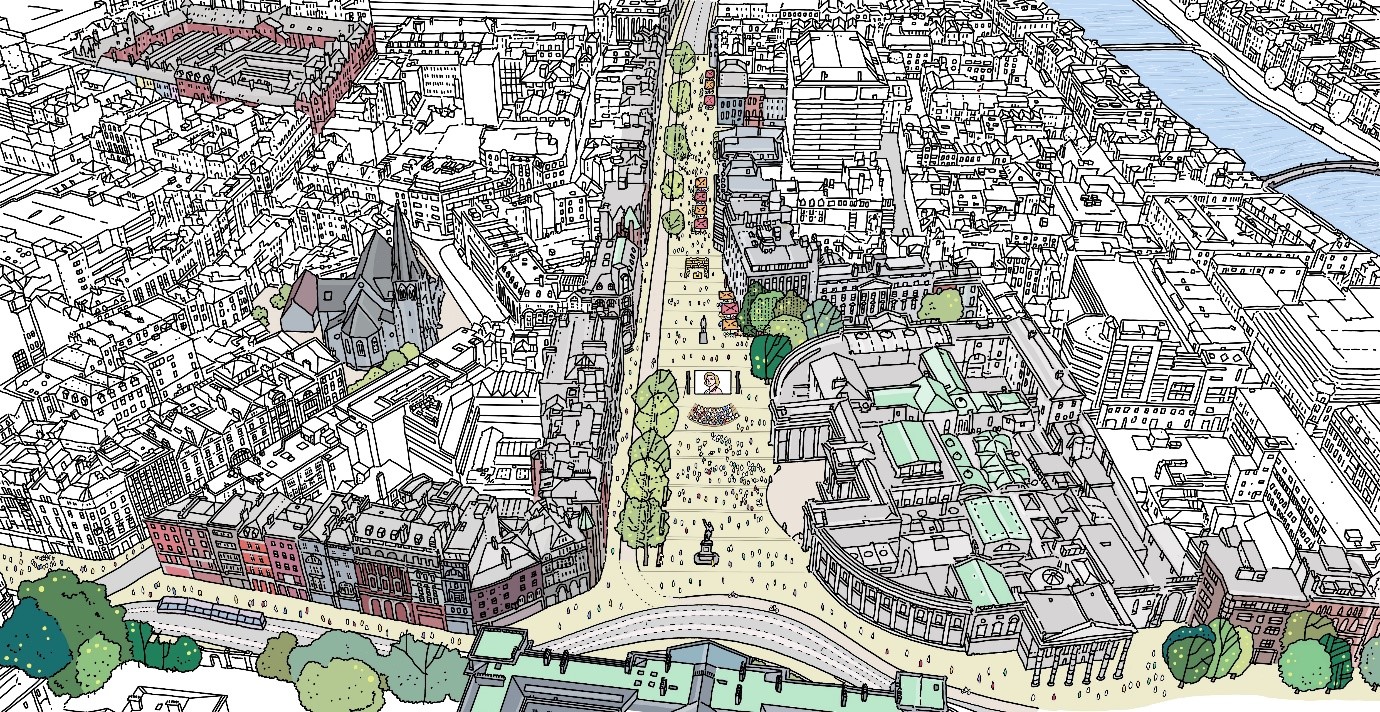 The proposed plans for the pedestrianisation of College Green in Dublin. Image: DCC

Dr Caulfield told The Hard Shoulder he fears more delays on this.

"It would seem that it's almost paralysis by analysis.

"Definitely better get it right than rush it, but we're not putting new railway tracks through College Green: we're putting buses through that could be re-routed if needed.

"The trials that were done a couple of years ago on this worked really well.

"So I don't see why there isn't the urgency around delivering a project like this.

"I think people in the city are fed up of hearing projects being delayed, kicked into the next decade, and more reports needed".

But he believes we could be trying to do too much too soon.

"We're trying to make a very sustainable city at breakneck speed - cities around Europe have done this over decades.

"And we seem to want to do it all before 2035, which is just not possible.

"I'm worried that it will be delayed further again, like many other projects.

"We did declare a climate emergency - I just don't feel that we're acting like we are in an emergency".

'Too far for people to walk'

While Richard Guiney, chief executive of DublinTown, believes we may be rushing this one.

"80% of the buses that come into Dublin city use that spine that goes from O'Connell Street, up Westmoreland Street and on to College Green.

"Our concern is that before the pandemic, 42% of people coming into Dublin city to shop and socialise, used the bus to get here.

"We have the redesign with the BusConnects, and I do think we need to work out how we're going to get the buses into the city.

"The original plans were for having buses in places like High Street, which is down by Christchurch.

"That's simply far too long for people to walk, especially people who may have mobility needs, to get to the likes of Grafton Street and College Green.

"There's definitely more work that needs to be done between Dublin City Council, the NTA and the bus companies to figure out how do we get those buses closer to where people need to be".

Main image: The proposed plans for the pedestrianisation of College Green in Dublin. Image: DCC