This weekend marks the 50th anniversary of Bloody Sunday when 13 innocent people were shot dead b...

This weekend marks the 50th anniversary of Bloody Sunday when 13 innocent people were shot dead by British soldiers while marching for civil rights.

Widely considered one of the darkest days of the Troubles, relatives of the victims have met regularly to mourn their loss and campaign for justice.

Liam Wray, whose brother Jim was killed that day, told The Anton Savage Show, that even after half a century the anniversary remains deeply painful:

“The pain does go away over the years but every anniversary obviously brings back the memories,” Mr Wray said.

“The biggest pain that we feel is that we’ve been campaigning for 50 years to bring those who are responsible for the murder of our relatives into the courts of justice.

“We were hoping that we would get recourse to justice for our dead family members and that hasn’t happened.”

In the aftermath of the atrocity, the British Government announced the Widgery inquiry which was widely considered a whitewash by families; it concluded that there was “no reason to suppose” the British Army would have fired on the marchers had they not been shot at first.

Years later, the Saville inquiry overturned Widgery’s findings and stated that, “none [of the marchers] was posing any threat of causing death or serious injury.”

Prime Minister David Cameron tells MPs that the Saville Inquiry into the Bloody Sunday killings found the actions of British soldiers were 'both unjustified and unjustifiable'. Image: PA/PA Archive/PA Images

For the Nash family, whose father, Alexander, saw his son, William, fatally shot in the chest, the aftermath of Bloody Sunday compounded their hurt:

“We were getting letters of hate. Plus, we’ve got a lot of lovely letters too from people in England.

“But the British press were putting out stories… We were described as a ‘pro-republican, violent family’. Nothing of the sort.

“They said that we weren’t close to our father, trying to make my father look like a mad man.

“They also said about him, implied and this is something we still deal with… they said he had an extensive criminal record. No he did not!”

“My brother, his name has been cleared, but those responsible for this act are just going to get clean away with it and that is so wrong… What kind of a country would put certain people above the law and give themselves carte blanche for their security services to go out and kill and shoot innocent people?

“And that’s what could happen in the future if they allow themselves these amnesties.” 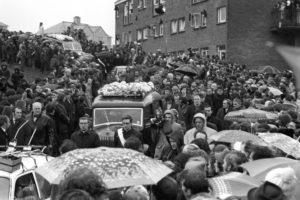 A silent crowd lines both sides of the road as the funeral procession of those who died Bloody Sunday passes, 02-02-1972. Image: PA/PA Archive/PA Images

The British Government favours an amnesty for all Troubles related killings but this is something Mr Wray fiercely opposes:

“We can’t bring back our dead relatives, nothing will ever do that… but if we don’t pursue this and don’t make people accountable, the danger is this will happen again.

“And I don’t want my children or my grandchildren growing up in a society where their lives are expendable to political or military thinking.”

Main image: A Bloody Sunday mural in Rossville Street in the Bogside in Derry. Picture by: Chris Parker/Zuma Press/PA Images.