The head of the Advertising Standards Authority for Ireland (ASAI) says a tampon advert, which wa...

The head of the Advertising Standards Authority for Ireland (ASAI) says a tampon advert, which was removed after 84 complaints, can be reinstated in a different form.

The TV ad for Tampax Tampons Pearl Compak was set in a fictional studio of a talk show.

It featured a female host and a young girl sitting in a chair waiting to be interviewed.

The two then began to talk about tampons and their correct insertion, which was accompanied by an on-screen demonstration.

"You gotta get 'em up there girls", the host said.

The ASAI committee upheld complaints in relation to general offence - but rejected others on the grounds of the ad being demeaning to women, that it contained sexual innuendo or that it was unsuitable for children.

Orla Twomey, chief executive of the ASAI, told Ciara Kelly on Lunchtime Live: "We are open to working with the advertiser to see how the ad can be brought back to market - because the requirement is that it be amended or withdrawn.

"So there is the option to look at the advertising and see whether or not it can be amended".

But she believes the right decision was made: "I think we've made a decision based on the evidence that was presented to us.

"We have an independent complaints committee which is made up of people with a broad range of experience, and they looked at this and they considered that in the terms of the code there was a breach.

"And so therefore I fully support that decision". 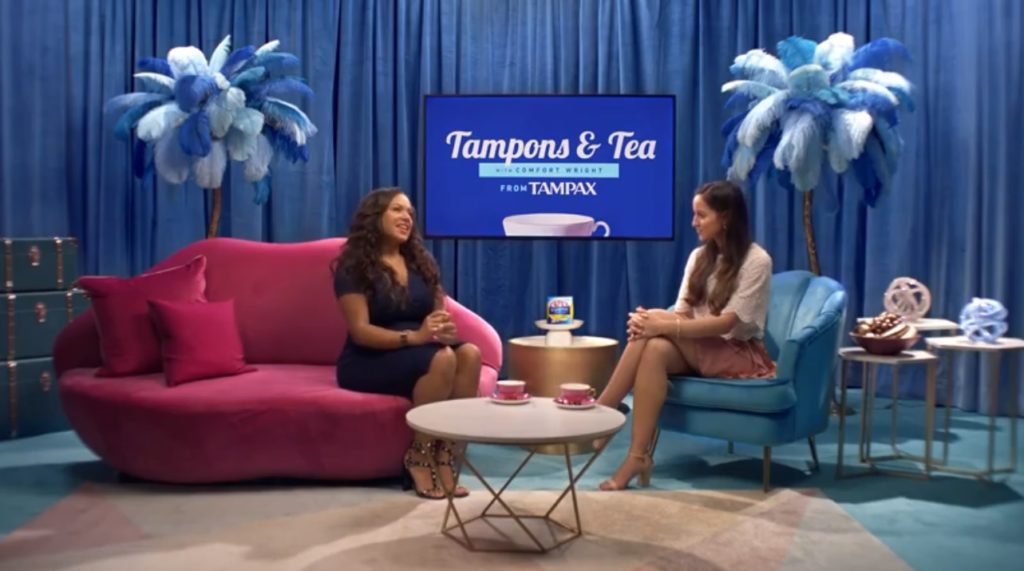 A scene from the Tampax Tampons Pearl Compak advert.  Picture by: YouTube/Candide McDonald

Explaining the decision, she said: "Over the last four and a half years or so, we've received complaints about 5,200 advertisements - and in that time only seven ads had more than 60 complaints.

"So it's quite unusual for us to get this number of complaints about an advertisement.

"The code requires that advertising shouldn't cause grave or widespread offence: the committee didn't consider that it had caused grave offence, but they considered that the evidence was there to show for the purposes of the code based on our experience that it was causing widespread offence".

Asked if an ad with two gay men kissing would be rejected if it received 84 complaints, Ms Twomey said: "I don't think we would get 84 complaints about it, to be honest with you.

"I think we got complaints in this particular context because of the content of the advertising, and that people were concerned and offended by it.

"You'll have known when you looked at our adjudication that there were a number of complaints made, a number of issues that we raised.

But Ms Twomey told Ciara: "I think I agree with you that if there was advertising that showed two gay men or women kissing, I don't think that we would uphold the complaints - depending on the context of the ad".

"And we're also not saying, I think it's important to say, that we're not saying that educational advertising - where a company seeks to provide more information about use - that in itself that that is a problem.

"It's not a problem, in this particular advertisement it was how they delivered that message is what has caused offence."

Ciara Kelly asked: "When you say widespread: you're saying 'widespread' and what you're doing is comparing it to other levels of complaints.

"You are not saying 'widespread' and comparing it to the population of Ireland - and I think that is a deep flaw with the ASAI".

On this, Ms Twomey replied: "One of the things that we take into account is that not everybody who sees something that they're upset about, or that they feel is wrong, takes the time to make a complaint.

"It is a case that in this issue, people were concerned about it and they did take that time. It is subjective", she added.

Main image: Packages of Tampax brand tampons on a supermarket shelf in New York in 2016. Picture by: Richard B. Levine/SIPA USA/PA Images