An advert about tampons has been banned by the Advertising Standards Authority for Ireland (ASAI)...

An advert about tampons has been banned by the Advertising Standards Authority for Ireland (ASAI) for causing elements of general offence.

The TV ad for Tampax Tampons Pearl Compak was set in a fictional studio of a talk show.

It featured a female host and a young girl sitting in a chair waiting to be interviewed.

The two then began to talk about tampons and their correct insertion, which was accompanied by an on-screen demonstration.

"You gotta get 'em up there girls", the host said.

In its latest bulletin, the ASAI said it received 84 complaints in relation to the advert.

Some of the words used by the complainants to describe the language used were 'offensive', 'crude', 'vulgar' and 'embarrassing'.

Two complainants said that they had no issue with the message of the advertisement, and one of them considered that the educational content may be beneficial to some.

But they both considered that the message could have been delivered in a discreet manner that was less crass.

Some complainants considered the advert to be demeaning to women, and that it belittled them and implied they may be ignorant when it came to using tampons.

Other complainants considered the phrase "get 'em up there, girls" to have sexual connotations.

They considered the advert to be sexualising the wearing of a tampon, and that the language used was 'suggestive, over-descriptive and provocative'. 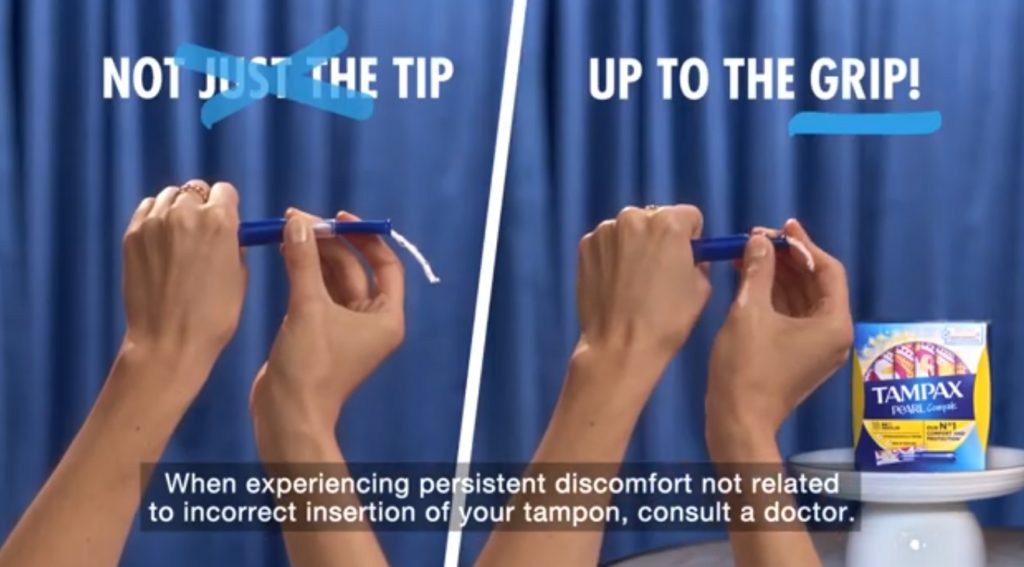 A scene from the Tampax Tampons Pearl Compak advert.  Picture by: YouTube/Candide McDonald

One complainant said that the language and imagery may give the false impression to young men that 'if young girls were using tampons that the likelihood was that they were having sex.'

And some complainants considered the advert to be unsuitable for daytime television while children may be watching.

The advertisers said although they had acknowledged internally that the copy idea might provoke a small number of complaints, they believed it was in the best interests of consumers to help them understand how to make the best use of tampons - and to explain how the product should be used.

The ASAI committee upheld the complaints in relation to general offence, noting that "the advertisement, although light-hearted in nature, provided factual information in a manner that was neither explicit nor graphic.

"They did not consider that the advertisement had caused grave offence.

"They noted, however, the level of complaint that had been received and the concerns expressed by complainants about the advertising and considered that it had caused widespread offence."

But it rejected complaints on the grounds of the ad being demeaning to women, that it contained sexual innuendo or that it was unsuitable for children.

It concluded that the advert should not run in the same format again.

It featured the person standing by a fridge, bare chested and wearing shorts.

The fridge door was open and the shelves inside the door were filled with bottles of different flavours of LeCoq Cocktails.

The person was drinking one of the cocktails by the neck with text underneath the picture which read: 'Taking a sip from my first coq*! .."

The ASAI found that the sexual innuendo in the advert was in breach of the code.

But as the post in question had been removed, no further action was required.

And a TV advert by phone company Three promoting an offer of certain models of Huawei, iPhone and Samsung smartphones is also to be removed.

It comes after an existing customer complained that an offer was only available to new customers.

The ASAI considered that the language used was unlikely to have been clear enough and was 'insufficiently familiar' to consumers to indicate that the product was available to only one category of customer.