The Oireachtas spent more than €426,000 on barristers' fees in defending the cases taken by Ang...

The Oireachtas spent more than €426,000 on barristers' fees in defending the cases taken by Angela Kerins.

The costs for the Supreme Court case, which the former Rehab chief executive won, were more than €192,000.

In 2014, Angela Kerins appeared before the Public Accounts Committee, which was looking into payments to Rehab.

She claimed the conduct of the hearings amounted to a 'witchhunt', where she was asked about her €240,000 annual salary and other matters.

Ms Kerins sued the PAC in the High Court, which said it could not intervene in how the hearings were conducted.

After sittings in the Court of Appeal, she appealed the decision to the Supreme Court - which largely found in her favour in February.

Details released to Newstalk under the Freedom of Information Act show the Oireachtas spent €426,000 on barristers' fees in the cases.

Nearly €234,000 was paid to senior counsels Paul Gallagher and Brian Kennedy and junior counsel Catherine Donnelly for the High Court and Court of Appeal proceedings.

The same barristers were paid a total of €192,000 for the Supreme Court action. 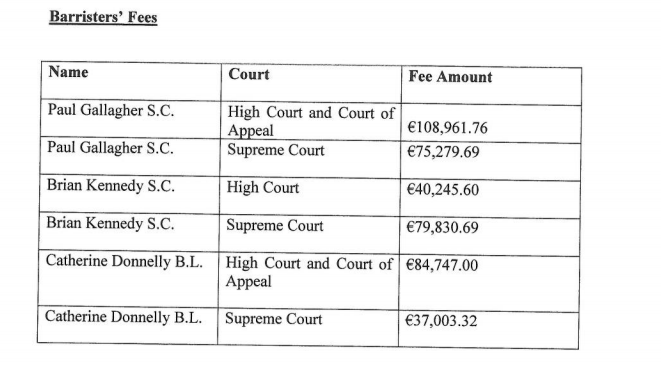 The Oireachtas says solicitors' work was carried out by in-house legal advisors, with no external solicitors employed.