Dara Calleary has admitted attending a golf dinner undermined the work of the health service in t...

Dara Calleary has admitted attending a golf dinner undermined the work of the health service in tackling COVID-19.

The Agriculture Minister resigned earlier today, after attending the function for 80 people on Wednesday.

Gardaí say they are investigating the event which was held in Co Galway on Wednesday, for alleged breaches of public health legislation.

Speaking to Midwest Radio, Dara Calleary said he understands the anger that was expressed towards him, and that the resignation was his decision.

He said: "I needed to put my hand up, I needed to stand up, and I needed to say 'I've messed up here, and damaged the national effort to try and take on COVID'.

"It was my call and my judgement at the end of the day."

Mr Calleary had earlier  apologised "unreservedly" for attending the function for 80 people.

He said he "should not have attended" the Oireachtas Golf Society event at a hotel, which took place just 24 hours after the new COVID-19 measures were introduced.

Current public health guidelines say that no more than 50 people should gather indoors.

In a statement, Mr Martin said: "This morning Deputy Dara Calleary tendered his resignation as Minister for Agriculture, Food and the Marine, following his attendance at the Oireachtas golf dinner on Wednesday evening.

"His attendance at this event was wrong and an error of judgement on his part.

"I have accepted his resignation.

"People all over the country have made very difficult, personal sacrifices in their family lives and in their businesses to comply with COVID regulations.

"This event should not have gone ahead in the manner it did given the Government decision of last Tuesday." 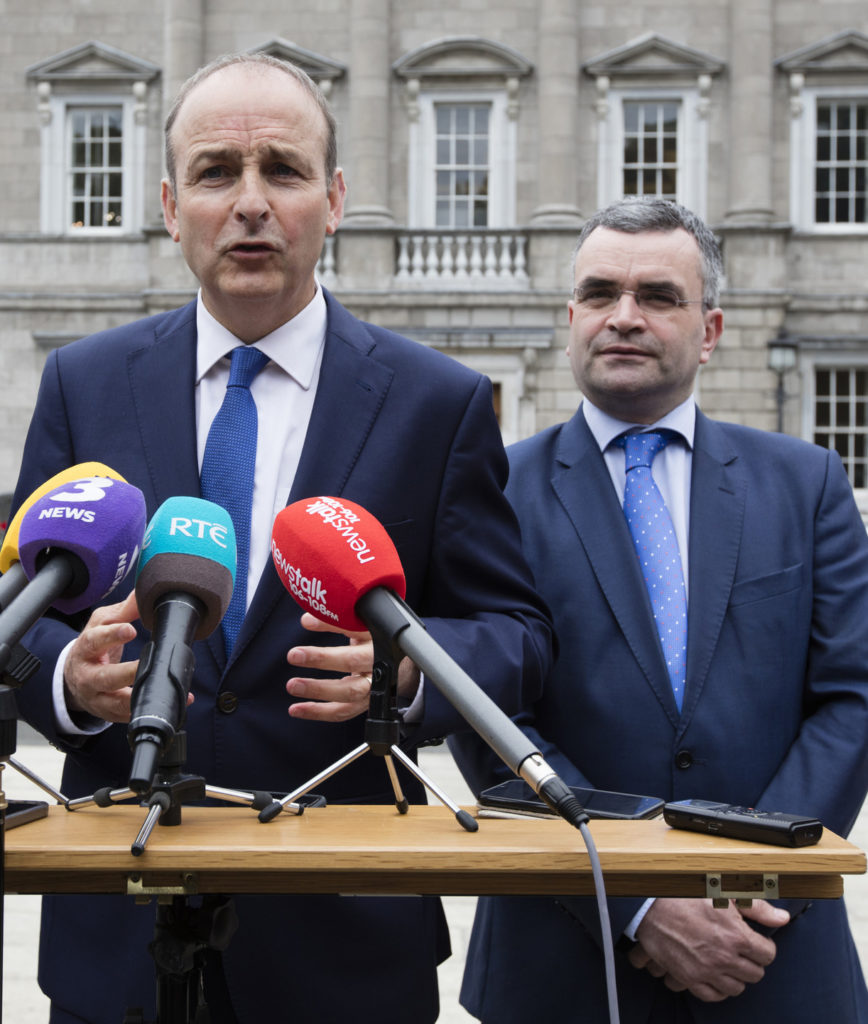 Micheal Martin and Dara Calleary are seen at Leinster House in 2017 Picture by: Eamonn Farrell/RollingNews.ie

In his resignation letter to Mr Martin, Mr Calleary said: "Further to our conversation last night I have reflected on my position in Government overnight.

"The overriding objective of this Government is to protect our people against COVID-19.

"It’s destructive path has left grief and illness across our island.

"There has been a major national effort to do this since March and people are making huge sacrifices and suffering economic loss to do this.

"My attendance at Wednesday evening's event has undermined that effort. I certainly never intended this to be the case."

"I re-iterate my apology to the people of our island. Their work and their commitment in this great effort has been immense.

"I apologise in particular to health care workers and their families and to public health officials who’s [sic] jobs I have inadvertently made more difficult.

"And again I apologise to you and all colleagues in Government.

"Whilst I mean that apology most sincerely, it is not sufficient and accordingly I am tendering my resignation to you as Minister for Agriculture Food and the Marine.

"It has been a privilege to serve in this department - if even for a short few weeks.

"It is an outstanding organisation with incredibly dedicated public servants serving our agriculture, food and marine communities both here and abroad."

Later, Senator Jerry Buttimer resigned as Leas-Cathaoirleach of the Seanad for attending the same event.

He described it as a "serious lapse of judgement".

"I apologise unreservedly for my actions this week," he said.

'Dysfunction at the heart of Government'

"I have to say it's just another example of the dysfunction at the very heart of this Government.

"We've had this week a not-so private row between the Taoiseach and Tánaiste, we've had the most hastily announced set of restrictions measures, huge contradictions.

"And now we have not just one minister, but possibly other senior politicians and former politicians breaching both the old and the new rules.

"What we need is we need the Dáil to be convened as a matter of urgency.

"And we need Micheál Martin and Leo Varadkar not only to make statements on all of these issues, but to take questions.

"And that needs to happen as quickly as possible."

Mr Callerary is the second agriculture minister to leave the Cabinet since the new Government took office.

His predecessor, Barry Cown, was sacked after just 17 days for failing to give further public statements on a 2016 drink-driving offence.