In ‘Class Rugby’, producer Jane Farley unfolds a classic tale of underdogs taking on an insti...

New documentary shines a spotlight on Leinster Schools rugby and life in Dublin in the 1980’s and today.

In ‘Class Rugby’, producer Jane Farley unfolds a classic tale of underdogs taking on an institution of privilege and might.

In a blast of music, memories and politics and we’re taken back to the 1980’s to travel the road with a band of Churchtown teenagers as they take on the established rugby-playing private schools of Leinster.

The radio premiere of ‘Class Rugby’ airs on Newstalk 106-108fm on Sunday 5th April at 7am, with a repeat broadcast airing on Saturday 11th April at 9pm. Podcast goes live after first broadcast.

In the world of Leinster school’s rugby, the most coveted prize is the Senior Cup- ‘it’s the holy grail’. The top fee-paying schools of Dublin tend to pass it around amongst themselves and have done so since it’s inauguration 133 years ago. But in 1983, De la Salle College, a non-feepaying school in the newly developed suburb of Churchtown, was the ecstatic and unlikely winner of the Senior Cup. 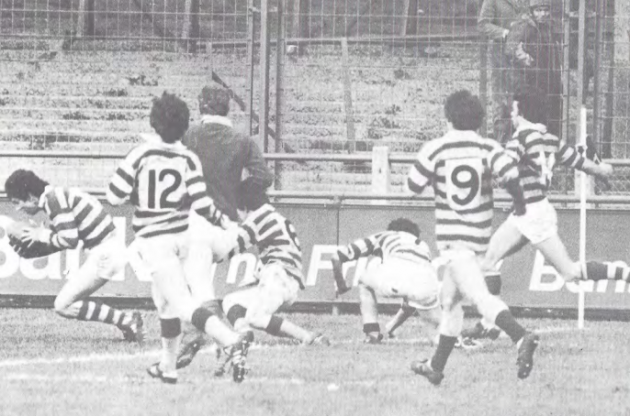 Everyone had written the 1983 team off, but their coach Brian Farley - also the producer’s father - knew that they had the potential to be a great team. Alan Mooney, wing forward remembers the humiliating defeats they suffered during the pre-season run of friendly matches but saw that ‘we had talent all over the place.’

In a decade that was coping with the arrival of AIDS, a heroin epidemic and the threat of nuclear war, ‘Class Rugby’ follows the Churchtown boys through the knock-out rounds and on to the final. Front row Diarmuid Coogan remembers wearing a black armband in support of the hunger strikers ‘I probably got a name for being a bit of a radical from that stage onwards,’ and reveals his own personal experience as a consequence of the 1983 Abortion Referendum.

With a soundtrack of Depeche Mode, Kajagoogoo, Phil Collins, The Clash, Abba and more, ‘Class Rugby’ immerses the listener in the lighter side of the 80’s. The men remember their teenage angst and excitement, going to victory parties, fancying girls and ‘having a first drink, the first drink of many for some’.

‘Class Rugby’  examines why it is that a cluster of Dublin’s elite fee-paying schools keep winning the cup year after year. How much do money and tradition really matter and how did the abolition of 2nd level fees and then 3rd level fees impact on people…and rugby?

Tom Leigh, a teacher in De la Salle today, highlights that the numbers of adult men continuing to play rugby after school are in free fall at the moment. He wants his pupils to have a sport for life and questions how much pressure is put on schoolboy players and how rugby becoming a professional game has impacted on the game at all levels.

Class Rugby shines a spotlight on Leinster Schools rugby and life in Dublin in the 1980’s and today.

The radio premiere of ‘Class Rugby’ airs on Newstalk 106-108fm on Sunday 5th April at 7am, with a repeat broadcast airing on Saturday 11th April at 9pm. Podcast goes live directly after first broadcast.

PODCAST: Class Rugby is broadcast as part of the Documentary and Drama On Newstalk Series, which showcases the best of original, homegrown and groundbreaking Irish Radio features. Podcast full series here: