The author of a new report into the Irish rental sector says big drops due to the coronavirus pan...

The author of a new report into the Irish rental sector says big drops due to the coronavirus pandemic are just the start of the effect.

Rents have seen their biggest one month fall since early 2009, according to the latest report from Daft.ie.

There was a 2.1% fall in rents between March and April.

Dublin was the exception, where rents were on average 3.6% higher in the first three months of 2020 than a year previously.

Nationally rents fell by 2.1% on average in April compared to March, which Daft says reflects the economic fallout from the COVID-19 pandemic.

With increases throughout much of the last 12 months, rents in the first quarter of 2020 were 3.8% higher than a year previously - this marks the lowest rate of inflation since late 2012. 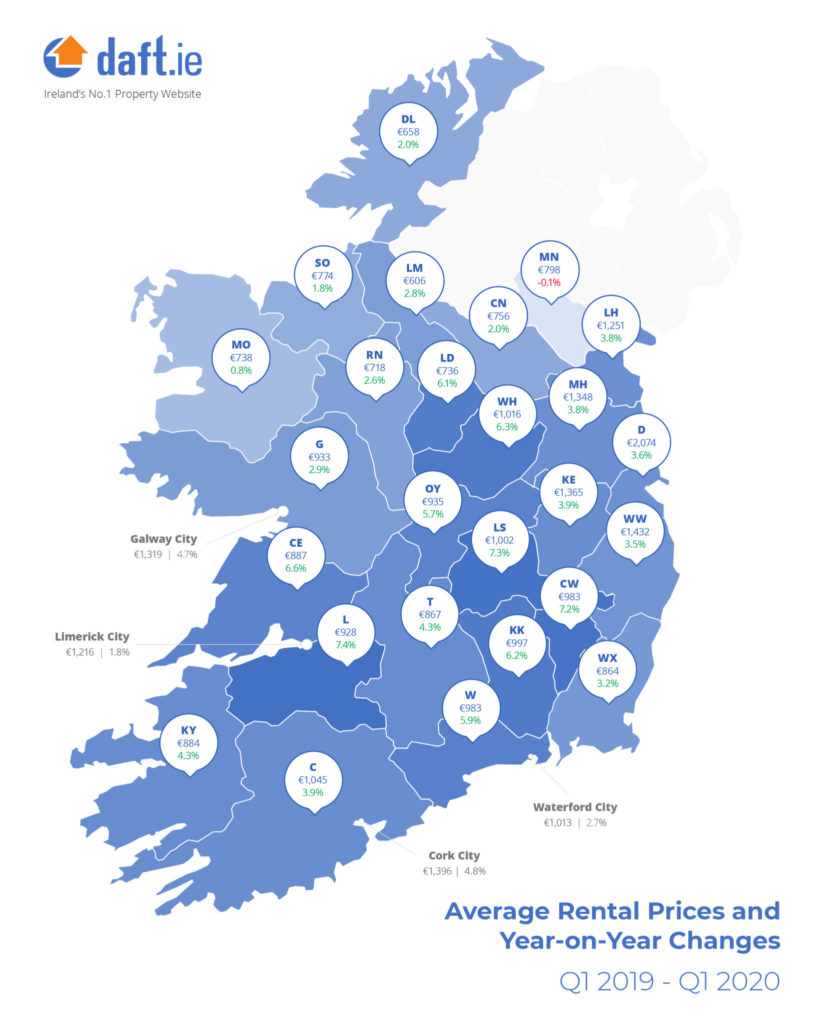 The average monthly rent nationwide stood at €1,418 in the first quarter of this year - €676 per month higher than the low seen in late 2011.

The early 2020 trends have been broadly similar across the country, with rents rising by close to 4% in many parts of the country in the year to March, before falling up to 2% in April.

In Dublin, rents fell by 2.5% in April, compared to March, while in the four other major cities they fell by an average of 2%.

In Leinster outside Dublin rents fell by 1.5% between March and April, while in Munster and Connacht-Ulster they fell by 1.8% and 1.4% respectively.

The number of homes available to rent nationwide on May 1st was almost 40% higher than on the same date a year earlier, with almost 3,800 homes on the market.

This increase comes even as the number of rental ads being posted dropped sharply.

Over the course of April, there were almost 15% fewer homes advertised than a year ago.

Dublin again bucks this trend, with a small increase in the number of listings during the month of April.

Economist and author of the report, Ronan Lyons, told Newstalk Breakfast:"It's pretty clear that COVID-19 and its economic effect anyway are being felt in the rental market."

"What we're seeing is just the start of the effect.

"And of course the sale and rental markets will be slightly different.

"This is a report that is just concentrated on the rental market - the sales market is potentially more frozen, if you want to use that description.

"The volume of listings, the number of properties coming on to the sales market, is down by about 60 or 70% - depending on which part of the country you're looking at.

"The rental market...by and large the number of properties being advertised for rent is down - and down quite a bit.

"Down by about a third across the country".

"The exception to that is central Dublin and also central Galway - where there appear to be properties moving over from the short-term letting market to the long-term rental market.

"What we're seeing more at the moment is the quantity effects, the price effects will take time".