Dublin City Council has said it is investigating the removal of four statues from outside Dublin...

Dublin City Council has said it is investigating the removal of four statues from outside Dublin's Shelbourne Hotel by management.

The statues have stood outside the famous hotel for more than 150 years.

The hotel said the statues were removed 'in light of recent world events' and their association with slavery.

However Dublin City Council said it is "not aware" of permission being granted to remove the statues.

It said the matter is now under investigation by its Planning Enforcement Section.

Their removal has been branded an 'illegal' and 'nonsensical' move.

Frank McDonald is former environment editor with The Irish Times.

He told Newstalk Breakfast earlier: "I've been around a long time and I've seen a lot of shocking things happening in Dublin - including the blowing up of Nelson's Pillar - but this is really bizarre.

"The four bronze statues were cast in Paris and... they've been standing in front of the hotel holding up their torches for more than 150 years.

"They're part of the heritage and cultural memory of Dublin, and so what if they depict two Nubian princesses and two slave girls from ancient Egypt because that was 4,000 years ago.

"So they had nothing to do with modern slavery and the demand for the removal of statues associated with the 18th century slave trade, such as the one that was dumped in Bristol Harbour last month". 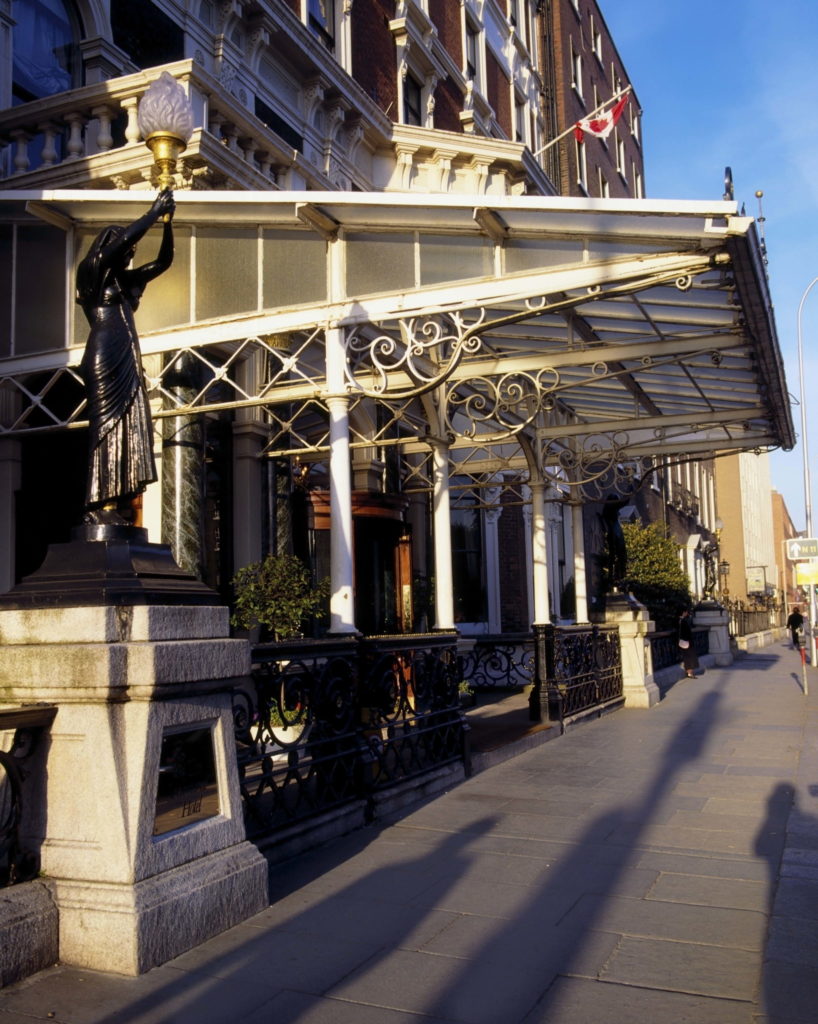 A view outside Dublin's Shelbourne Hotel on St Stephen's Green in 2007. Picture by: The Irish Image Collection/Zuma Press/PA Images

"The hotel admits itself that there had been no complaints about them, it was just a decision made by the Shelbourne itself and its owners - Kennedy Wilson - and the operators of the hotel, Marriott International.

"Both of them are US companies and it seems to me that what they've done in this case was to foist American cancel culture on Dublin's oldest grand hotel, in what I can only describe as a high-handed exercise in so-called political correctness.

"And this was done without any public debate and, more importantly, with no planning permission".

"There's nothing on file to show that they applied for planning permission for this - if they had, there would have been a public debate of course".

"The basic point is that the Shelbourne is a protected structure and any material changes to the building must have planning permission, and that includes its curtilage".

"It's illegal to make changes to a protected structure without planning permission.

"I've lodged a complaint with the Planning Enforcement Division of Dublin City Council, asking for an immediate investigation and urging them to serve a warning notice on the hotel as soon as possible."

"But that doesn't mean that you suddenly turn around and say 'what about these statues, they're Nubian princesses and slave girls and we have to get rid of them because of this' - this is just nonsensical".

The Irish Georgian Society also said it was not consulted about the removal of the statues.

It added that any such works require planning permission, which it believes was not sought.

It has contacted Dublin City Council urging them to address the matter.

Further to reports and in the interests of clarity, the IGS was not consulted about the removal of statues from The Shelbourne Hotel. Such works require planning permission which we believe was not sought. The IGS has contacted DCC Planning urging them to address the matter. pic.twitter.com/2cftDLbffr