The village straddles Co Donegal and Co Fermanagh, divided by the River Termon. The river marks the boundary between the Republic and the North. Tullyhommon, which is part of Pettigo, is on the Fermanagh side. 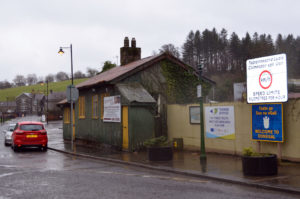 08 February 2019, Pettigo: A barrack on the Irish side of the village once served as a border post.  Photo: Christoph Meyer/dpa

The village straddles Co Donegal and Co Fermanagh, divided by the River Termon. The river marks the boundary between the Republic and the North. Tullyhommon, which is part of Pettigo, is on the Fermanagh side.

Our reporter Aideen Finnegan visited the town to gauge whether or not residents see a hard border returning. Postmaster James Gallagher, mechanic Mervyn Johnston (pictured above) and Father Joe McVeigh from Border Communities Against Brexit are amongst the voices you’ll hear in this report. Listen here:

In the event of a hard Brexit, the village would be in the bizarre situation where the Pettigo part would remain part of the EU, while the Tullyhommon part would be outside. It brings up unwelcome memories:

We were stopped anytime we were going up the road. You'd stop [again] coming down the road, asked the same senseless questions all the time. You'd have to travel maybe 10 miles to go four miles if you understand me like.

The village witnessed The Troubles, at time first-hand. A bomb which was planted on the Tullyhommon side failed to go off at the same time as the Enniskillen bomb in 1987.

There were a few killings around here [...] My cousin's pub out the road was blown up the next year, the roof was blown off it. On the other side there was a Protestant UDR man, he was shot dead. 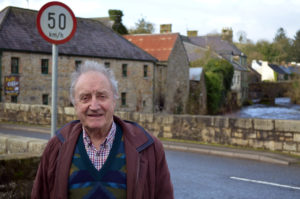 08 February 2019, Great Britain, Pettigo: Mervyn Johnston standing in front of the bridge that connects the Northern Irish part of the village with the Irish part. Photo: Christoph Meyer/dpa