Jordan Larmour has deputised with aplomb for Ireland at full-back in a couple of the Rugby World ...

Jordan Larmour has deputised with aplomb for Ireland at full-back in a couple of the Rugby World Cup pool games.

He was particularly impressive against Samoa on Saturday, also scoring a late try.

But will Larmour keep his place in Joe Schmidt's side for the quarter-final against New Zealand?

The Irish Independent's Ruaidhri O'Connor joined us from Japan to discuss that and Bundee Aki's three-week ban after his red card against Samoa on Saturday.

Having listened to Joe Schmidt's answer on Larmour from today's press conference (check it out on the YouTube above), Ruaidhri feels Rob Kearney is likely to return at 15.

"My translation of that long Joe Schmidt answer is that Rob Kearney is coming back in at 15 next week," he said.

"That Jordan Larmour played very well. 'Back on the bench, if we need you, we'll call on you'. And he may be called on to make an impact. In fairness, he could be putting the wingers under pressure. Because Keith Earls and Jacob Stockdale have hardly been lighting it up this tournament. Neither of them have scored yet.

"Stockdale wasn't really in the game at the weekend after that big head collision earlier in the game. I think Larmour has done really, really well and I'd say Andy Farrell has earmarked him as his full-back of the future once this World Cup is over. But I think Joe Schmidt has earned his right to select his tried and trusted for this game. And if you think about the way the All-Blacks play and the way they picked apart South Africa with their cross-field kicking game with their clever kicks in behind, there's no-one like Rob Kearney to give you that assurance in the back-field. He's scored two tries at this tournament as well, don't forget." 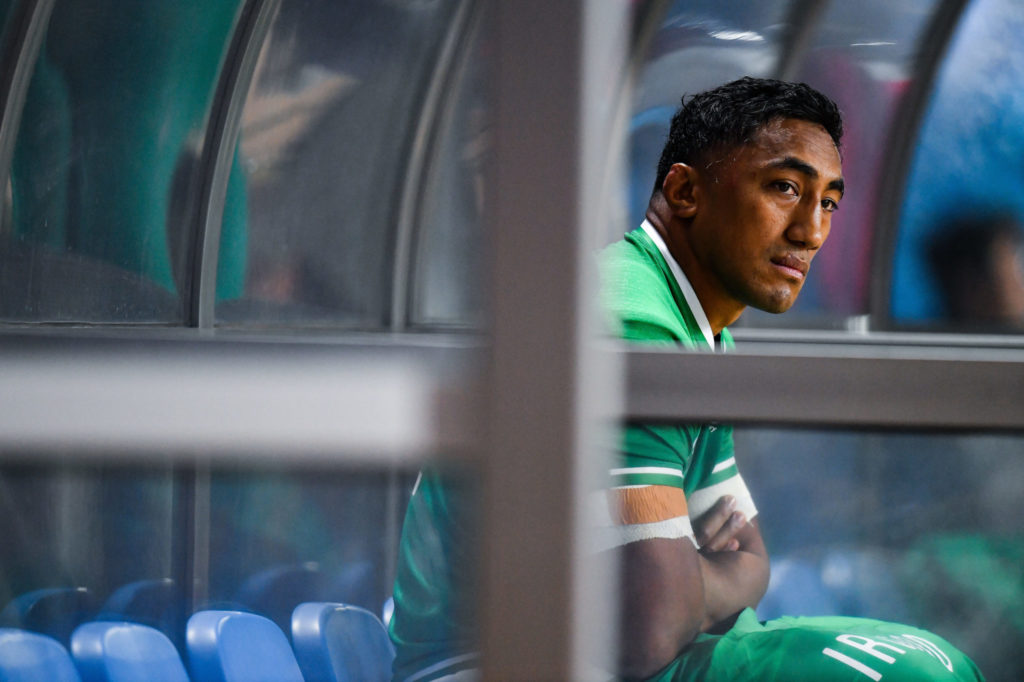 12 October 2019; Bundee Aki of Ireland sits on the bench after being shown a red card during the 2019 Rugby World Cup Pool A match between Ireland and Samoa at the Fukuoka Hakatanomori Stadium in Fukuoka, Japan. Photo by Brendan Moran/Sportsfile

Meanwhile, Aki's ban effectively rules him out of the remainder of the World Cup. Ruaidhri gave his take on how Ireland will deal with the absence of such a key player in the Schmidt era. He expects Ireland to attempt to get the ban reduced.

"I do think that Ireland will, even just if they can get him back on the pitch for the final or a semi-final, it'll be worth it," he said.

"Because while they have a very good chance of beating New Zealand this Saturday without him - because Garry Ringrose and Robbie Henshaw are very good players - they have to consider the long game as well.

"And losing Aki reduces their ability to rotate in midfield. He can't train while he's here as far as I can read it. He will remain in Japan and they can't replace him. It's a blow to the squad and a blow to Ireland's overall World Cup chances. Whether they're here or not next week, remains to be seen."

You can watch the full Monday Night Rugby chat above via our YouTube channel.