Shane Lowry brings a one shot lead into the second day of the RBC Heritage tournament in South Ca...

Shane Lowry brings a one shot lead into the second day of the RBC Heritage tournament in South Carolina. Armed with some new equipment the Offaly man bounced back from a disappointing showing at last week’s Masters to card a bogey free first round of 65.

Lowry carded three birdies on both sides of the turn at the Harbour Town Golf Links to set the pace on six under par. The 32 year old put a new driver in his bag at Augusta last week and is using a different putter in Hilton Head this week. He thinks the tweaks are paying dividends.

"Pretty much my whole game felt good” he told a post-round press conference, “I haven't had that feeling in a while.”

“I've struggled off the tee quite a bit this year and I managed to find a new driver that I like." Having revealed he had tried at least 30 different clubs, Lowry added, "Today was the first day that I hit the ball well off the tee. 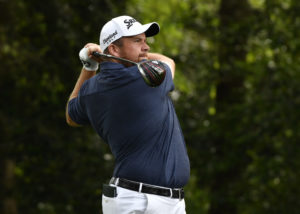 "I'm happy with my golf. My scores haven't been great of late, but I felt like I've been playing okay. So maybe this is a reward for the perseverance."

Lowry holds a single stroke lead.  He is ahead of five Americans Trey Mullinax, Daniel Berger, Luke List and Ryan Palmer and Ryan Moore. Ulster’s Graeme McDowell and Waterford native Seamus Power are both 3 under. They hold a share of 15th place alongside the likes of 2016 US Open winner Dustin Johnson and Rafa Cabrera Bello of Spain.

Lowry will return to the course at noon in South Carolina, that is 5pm Irish time. McDowell will be out 40 minutes later. Power is one of the first players to tee off his second round. That will be around 12.10 pm Irish time.