It has been confirmed that the IRFU-contracted Jack McGrath will be playing his club rugby with U...

It has been confirmed that the IRFU-contracted Jack McGrath will be playing his club rugby with Ulster from the start of the 2019/20 season.

The 29-year-old prop becomes the latest in a growing line of players to depart Leinster in an inter-provincial move.

Explaining his decision, McGrath acknowledged that he had to make a "difficult decision" in leaving the reigning Champions Cup holders.

"This was a difficult decision but one I believe will put me in the best position to continue to perform at the top end of the game," McGrath is quoted as saying on the Ulster Rugby website.

"I have enjoyed a huge amount of success at Leinster, but I feel that looking beyond the World Cup to the next phase of my career, I will benefit from the opportunity within the Ulster environment.

"I am now fully fit after a disrupted start to the season and I’m looking forward to putting all my energy into helping Leinster’s drive to defend the European and PRO14 titles and finishing this season on a high." 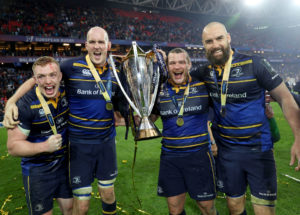 Speaking of McGrath's move to the province, Ulster Head Coach Dan McFarland was excited at the prospect of the prop joining.

"We are delighted to be welcoming Jack on board next season," stated McFarland, "and it is hugely encouraging to see a player of his calibre express the desire to join us."

"Jack’s quality on the field is undoubtable, and his experience of playing at the highest level will be a hugely valuable asset to the club as we continue to develop a promising group of young forwards."

In a similar manner to McGrath himself, David Nucifora, the IRFU Performance Director, stated: "Jack has made a very tough decision which he believes will advance his case for selection for Ireland. You have to respect a player with such ambition."

"Leinster is a fantastic environment but it is testament to the work that all four provinces are doing that players are seeking opportunities within Ireland to advance their international careers."

Everyone’s in the Team Of Us.
Vodafone. The Official Sponsor of the Irish Rugby Team.