As Andy Moran rides off into the sunset as a player, we had the pleasure of his company. The now ...

As Andy Moran rides off into the sunset as a player, we had the pleasure of his company.

The now former Mayo footballer was part of our St Vincent's Roadshow in association with SuperValu.

The Ballaghaderreen club-man began by touching on this week's retirement announcement and it was a long time in the making.

"Last October 2018," he said of when he had decided to set his retirement.

"My wife Jennifer and I talked about it. We didn't enjoy 2018 at all. There was a lot of stuff going on in my personal life. Dad passed away and there were just a few things really. It didn't really settle with me properly and then there was Newbridge Or Nowhere and we didn't want to go out like that.

"James [Horan] rang and said, 'Would you give it one more shot?' And we went and did it. The way I look at it, we got to play in Killarney, a place I always wanted to play in and got to play Meath in Croker. We had the Donegal game in McHale Park and finished off with the Dubs in Croke Park. So bar winning the All-Ireland, in terms of venues, I couldn't really ask for more to be honest."

He also described the tributes to him this week as "overwhelming" and "nice to look back on good memories".

Moran also touched on the early crossroads in his life when soccer played a major role in his youth.

"When I was younger, soccer was probably my major game going up through the ages," he admitted.

"But then in and around 18-19, I just started taking [the Gaelic football] seriously. I went playing a bit for Longford [Town FC] and then John Maughan rang and as soon as he rang, it was just, 'OK, this is what I'm going to do.'" 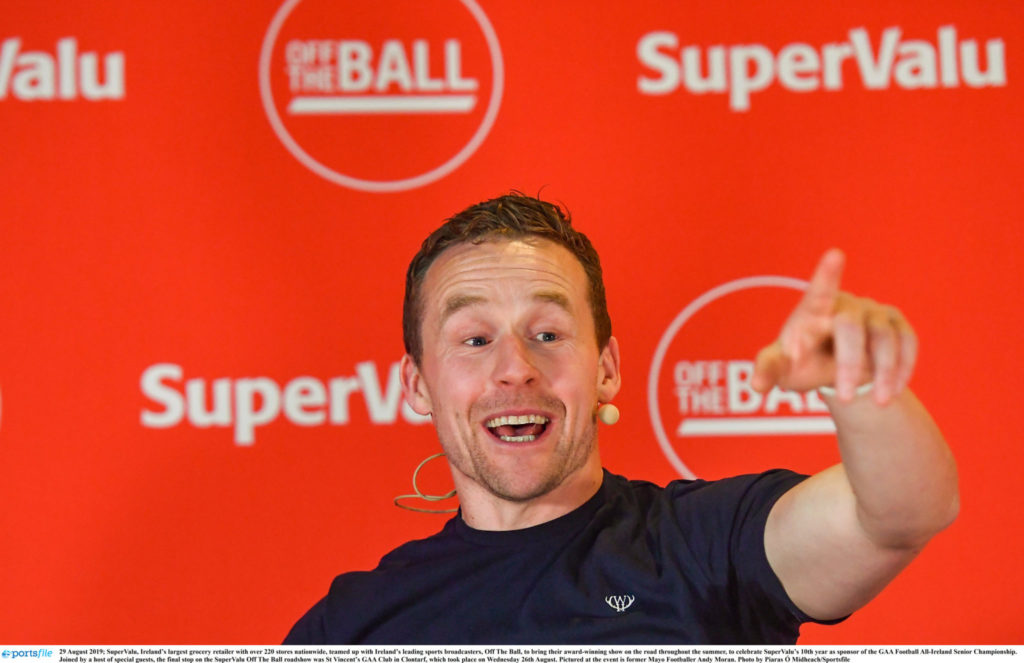 29 August 2019; SuperValu, Irelands largest grocery retailer with over 220 stores nationwide, teamed up with Irelands leading sports broadcasters, Off The Ball, to bring their award-winning show on the road throughout the summer, to celebrate SuperValus 10th year as sponsor of the GAA Football All-Ireland Senior Championship. Joined by a host of special guests, the final stop on the SuperValu Off The Ball roadshow was St Vincents GAA Club in Clontarf, which took place on Wednesday 26th August. Pictured at the event is former Mayo Footballer Andy Moran. Photo by Piaras Ó Mídheach/Sportsfile

As he outlined, his early Mayo days required some adjustment as he got used to the game. And he also revealed that a couple of serious injuries had a somewhat beneficial effect in his development as an elite level full-forward.

"I broke my leg and did my cruciate inside 12 months and it made me just adjust my game and move where I needed to move," said Moran.

"I couldn't play between 5 and 12 and I just didn't have the legs for [palying] out there. So inside I went and tried to learn from the best players."

Aside from contemporaries like Dublin's Con O'Callaghan and Kerry's Paul Geaney, he also studied the movement of strikers in soccer.

He also confirmed that he will go down the coaching route "eventually" once everything settles down.

"I've been dreaming about winning an All-Ireland for Mayo since I was 5-years-of-age. Hopefully, my story isn't finished for Mayo yet," Moran added.

And he also discussed what he'll miss - mostly the "craic" and camaraderie in the Mayo dressing room. But he also took a sanguine view of his last Mayo appearance, the 2019 semi-final loss to Dublin.

"The defeat against Dublin a couple of weeks ago, I'm not saying it was fine. But usually, if you lose by a point and it's a really tight margin, you're thinking, 'Ah, a milimetre, if I did that or this...' When you lose by 10 points, you lose by 10 points and the team is just better than you. It's as simple as that."

And he also explained how family life and fatherhood has made him more "relaxed" about sporting fate.

"I'm happy to be defined as a good father and my pastime is sport," he said.

You can watch the full chat with Andy Moran above and the whole St Vincent's Roadshow in association with SuperValu below: