Johnny Sexton will be fit in time for Ireland's remaining Six Nations matches at the end of this ...

Johnny Sexton will be fit in time for Ireland's remaining Six Nations matches at the end of this month according to Leinster backs coach Felipe Contepomi.

The Blues outhalf was withdrawn due to a hamstring injury after just 24 minutes of his province's Guinness PRO14 win against Dragons at the RDS last Friday night and Leinster have marked him down as unavailable for this weekend's match away to Benetton.

Contepomi insisted today that that the injury is not a serious one and that the Dubliner will be ready to join the Irish squad when they gear up for the games against Italy in Dublin on 24 October and France in Paris seven days later.

"It's not that serious. It's a minor hamstring injury. He was taken off as a precaution basically," said Contepomi at the Leinster press briefing this afternoon. "I think he'll be fine, especially for all the international games coming up."

"When you take someone off as a precaution and it is a muscle [injury], we are making sure that he is getting all the strength, and so on, to get back fully fit. If he can train this week, it would be great, but we are not going to hurry [it]. It's a minor injury." 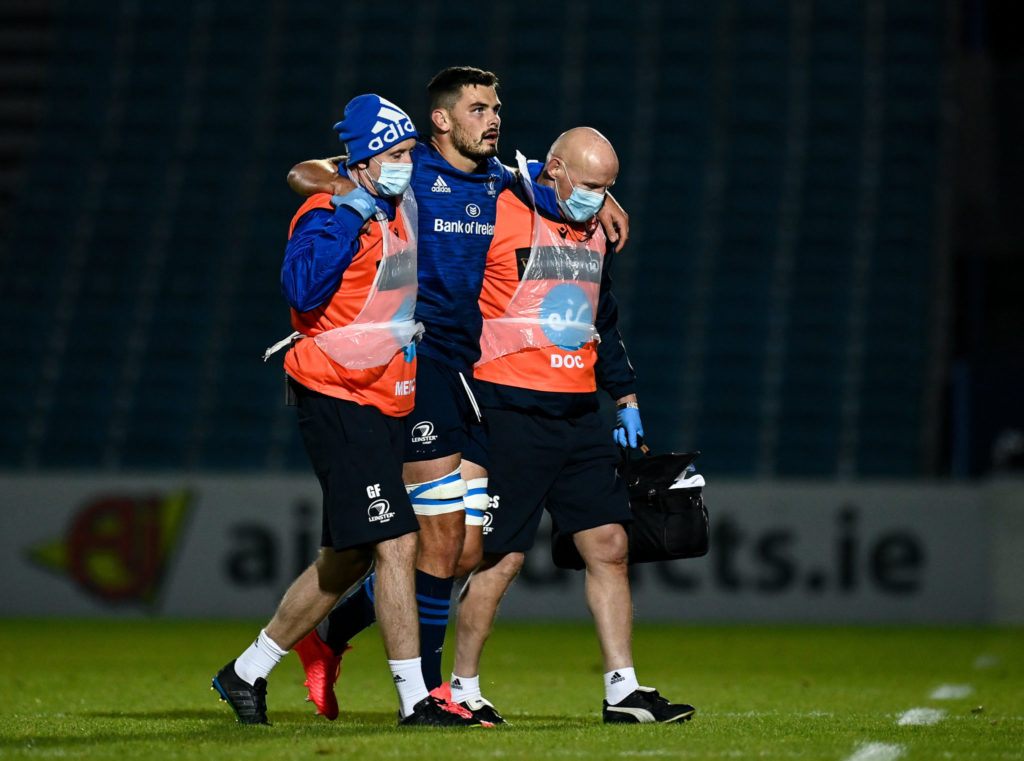 2 October 2020; Max Deegan of Leinster leaves the field with an injury during the Guinness PRO14 match between Leinster and Dragons at the RDS Arena in Dublin. Photo by Harry Murphy/Sportsfile

The news is not as good with regard to number 8 Max Deegan who injured his knee in the Dragons win and it would seem like he may have to wait to add to the first Irish cap he got in the Six Nations match against Wales last February.

Deegan did undergo a scan on his injured knee but the province were unable to get a full diagnosis from that.

"I can't say how long but it's definitely not a minor one in this case," Contepomi replied when asked if he could give a a rough idea on how long the 23-year-old might be out for.

"There is not a full diagnosis yet as he has to be seen by a specialist. This one is not a minor injury. It looks like a more serious one."

Contepomi also confirmed that another player suffering with a hamstring complaint, prop Andrew Porter, will be assessed later in the week while he insisted that Dan Leavy has not suffered a setback in his return from a serious knee injury.

The flanker's return from over a year on the sidelines has been mooted by coaches at the province for over a month now.

"You have to be a hundred per cent available and sure to get back. It takes a long time for that injury. The last thing you want to do, just because of hurrying it up by one or two weeks early, to go back and re-injure," said Contepomi.

"It's not only the injury, it's the mental side of that. We want to make sure that he's one hundred per cent. You're never a hundred per cent but the best condition to be able to go back and play rugby."