Rush's own - Eoin Morgan is a Cricket World Cup-winning captain

It was an extraordinary end to a long day at Lord's yesterday as England, led by Dubliner Eoin Mo...

Rush's own - Eoin Morgan is a Cricket World Cup-winning captain

It was an extraordinary end to a long day at Lord's yesterday as England, led by Dubliner Eoin Morgan, sealed their first ever Cricket World Cup triumph with victory over New Zealand.

The final went to a super-over after the sides had finished level after their fifty overs. England scored 15 from the super-over, as did New Zealand, but as they had batted second England were crowned champions.

It was England's first final since 1992, with this new generation led by a 32-year-old Dubliner - Eoin Morgan from Rush.

Morgan now has over 300 caps for England, including over 150 as captain, to add to the 63 appearances he earned with Ireland before he left to play Test cricket.

Ironically, Ireland are now a fully-fledged Test nation. In 2012, Cricket Ireland chief executive Warren Deutrom had pledged to secure Test status by 2020 - however, the success of the national team convinced the ICC to fast-track that process.

Ireland will play their first ever Test match at Lord's next week - a historic four-day Test which gets underway on July 24th.

It will be Ireland's third Test in all since gaining full member status back in June 2017 - a decade after a famous win over Pakistan in the 2007 World Cup.

Thirty-two-year-old Morgan began his playing close at Kenure Park in Rush, not far from his Dublin home.

His father Jody was the third XI captain at the Rush Cricket Club, and he would often bring along his children - three sons and two daughters. Although small in stature at a young age, Morgan always played a couple of years ahead of his age group and captained the Rush side that won the Under-11 Leinster Cup. 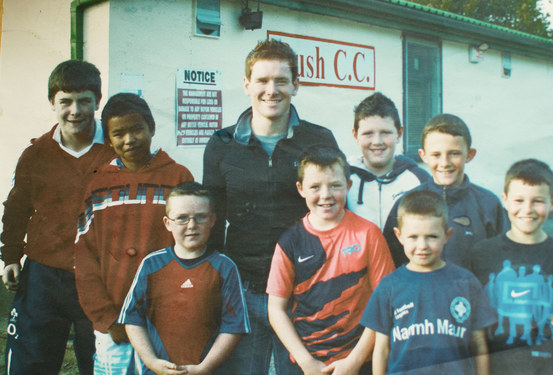 A scholarship to Catholic University School on Leeson Street (and more silverware) followed - but it was always an aspiration of Morgan's to line out for his mother's native England.

It was quite clear then that this win meant a significant amount to the England captain.

"This means absolutely everything. It's been an absolutely incredible journey. I still can't quite believe it, that's why I'm carrying it around as much as I can."

Morgan also spoke about the 'rub of the green' and referenced the diversity in this England team.

"It was the most incredible game of cricket, with nothing between the sides. It was the finest of margins, and it could have gone either way.

The 15-man England squad includes five players born outside the UK. Aside from Morgan, Tom Curran and Jason Roy are originally from South Africa, Ben Stokes and Jofra Archer were respectively born in New Zealand and Barbados, while Moeen Ali and Adil Rashid are the grandchildren of Pakistani immigrants.