After an unsteady start to the season, Real Madrid appear to be finding their feet at just the ri...

After an unsteady start to the season, Real Madrid appear to be finding their feet at just the right time.

Despite losing both Zinedine Zidane and Cristiano Ronaldo during a summer of seismic change in the Spanish capital, Real, scarcely hampered by the hasty appointment and ruthless dismissal of Julen Lopetegui, look set to qualify for the quarter-finals of the Champions League once more.

Although all hope of securing domestic success appeared beyond them at a significantly early point in the season, even allowing for their 6 defeats and 3 draws, Santiago Solari's side sit a not entirely insurmountable 6-points shy of table-topping Barcelona.

"If this was a YouTube video, it'd be a cruiser heading toward the rocks," Graham Hunter noted of Real Madrid's season on Thursday's OTB AM.

"Everybody is screaming and holding their head, then suddenly, the cruiser with a new captain on board averts the path and it's going to dock beautifully.

"[Solari] has solved problems consistently, he has treated Marcelo and Isco the way they need to be treated.

"But, his tapping on the shoulder of Antonio Pintus, the fitness coach, and saying to him, rid the cobwebs from the World Cup players, get them in shape, get them dynamic, get them ready for February and March has worked absolutely brilliantly.

Real Madrid are thorny, and hard to put down as Paris St Germain, Liverpool, Bayern Munich and Juventus found out last season 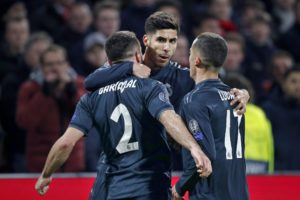 Although Solari has not enjoyed an unblemished start to his Real Madrid spell, Hunter pointed to the improvements the Argentine has implemented, and a set of resilient characteristics that are sure to help the reigning Champions League winners propel themselves toward a fourth-successive European crown.

"Real Madrid are a very, very good watch at the moment," Hunter stated.

"They're thorny, hard to put down as Paris St Germain, Liverpool, Bayern Munich and Juventus found out during those runs to win the Champions League [last year].

"I fully admit that at the beginning of the season I didn't think this was a squad which could remain hungry enough - and without Cristiano Ronaldo's goals - to win the Champions League for a fourth consecutive time.

"I don't think they are favourites to win it yet, but I'm having to change my view.

You can listen to all of Graham's remarks on #OTBAM here.