Brazil's Neymar out of Copa America with ankle injury

Neymar is out of the 2019 Copa America with an ankle injury The Brazil star picked up the injury ...

Brazil's Neymar out of Copa America with ankle injury

Neymar to miss the 2019 Copa America with an ankle injury

The Brazil star picked up the injury against Qatar in a warm up game ahead of the tournament. The incident happened in the 17th minute of the game.

Neymar left the field in tears with his ice on his ankle.

Initially the Brazil manager Tite suggested the injury was not serious. However, after the game pictures emerged of the Paris St Germain star leaving the Mane Garrincha stadium in a protective boot.

Brazil won the friendly against Qatar by two goals to nil. The goals came from Everton’s Richarlison and Manchester City’s Gabriel Jesus in the first half. 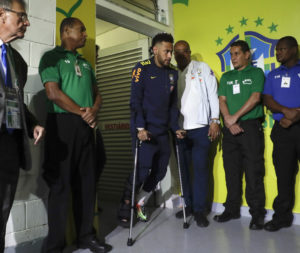 Brazil still has another warm-up match to help them work on shape without Neymar. Tite will now call up a replacement before they play Honduras on June 9th.

Brazil get their Copa America campaign underway on June 15th against Bolivia at the Cicero Pompeu de Toledo Stadium. After Bolivia, Brazil face Bolivia on June 15th before the final group A game against Peru on Saturday June 22nd.

It’s another major tournament Neymar will miss having picked up a back injury during the 2014 World Cup.

While Neymar is on the sidelines, speculation is continuing about his future. It is reported that the star is unhappy in Paris, with a return to Barcelona a possibility.

Paris St Germain are not interested in letting Neymar leave and will fight off any potential suitors.