Kick it Out urges Premier League players to take a knee

The chairman of the anti-racism Kick It Out campaign has urged every Premier League footballer to take a knee when the season resumes in protest.

Sajay Bhandari has called on top-flight footballers in a conversation with the Guardian, to peacefully protest as Colin Kaepernick did in the NFL, except Bhandari hopes authorities will respect players' peaceful gestures.

“Every player should do it," according to Bhandari."It should be teams doing it. You saw the Erling Haaland celebration after the first game back where all the Borussia Dortmund players did the social-distancing celebration." 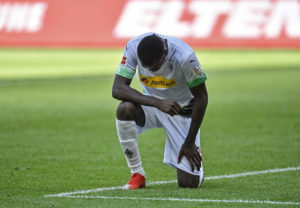 "They could all take a knee." says Bhandari. "Racism’s not about black players or brown fans. It’s about all of us. Racism corrodes society and we’re all hurt by it. Everyone should want to demonstrate their solidarity and disgust.

"If they could do that by taking a knee, well if every player did that it would be quite a powerful message. I would be interested to hear what the authorities thought of that, whether it would constitute a breach of the rules. To me, that is about demonstrating solidarity.”

The German authorities are investigating celebrations by players in the Bundesliga over the weekend, including Marcus Thuram taking a knee and Jadon Sancho displaying a message of support for George Floyd.

However, these investigations have been initiated as the incidents are contraventions of "The International Football Association Board’s (IFAB) laws of the game adopted by the DFB for the 2019/20 season," according to a DFB statement.

The Chairman of the DFB has expressed his support for the players' actions. Bhandari hopes that some leniency can be shown by football authorities to players making the gesture.

“I would urge all the authorities and all the clubs to show a degree of understanding,” he said. “This is almost above politics.

"This is about right and wrong. This is someone who was killed on the streets by the police. This is about seeking justice for him and others like him. I don’t see that as being political. That’s human.

“I think the players understand that if they take the shirt off they’re going to get booked. Everything is contextual and in this context I think it would be very harsh for a punishment to go beyond that.

"I’m not sure how something like taking a knee could expose you.”